In an interview with Al-Monitor, Egyptian Ambassador Youssef al-Sharqawy says that despite his country's participation in Operation Decisive Storm, it will not play a political role in resolving the conflict in Yemen. 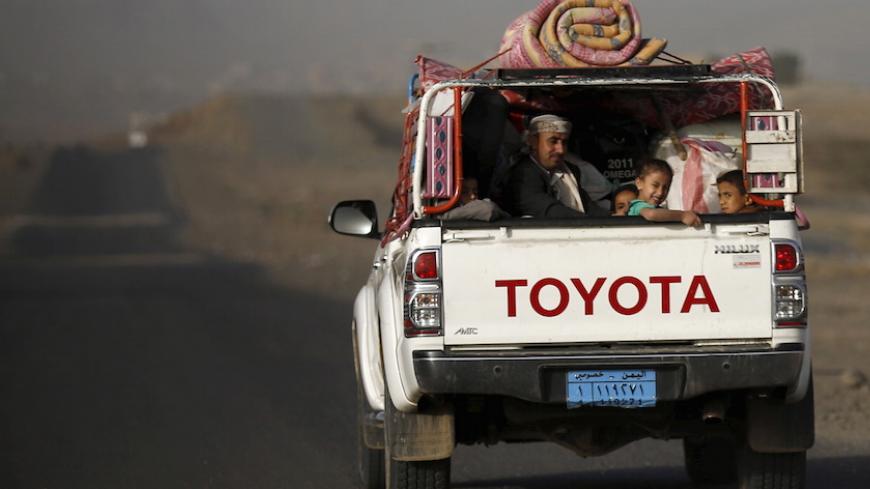 A man and his children ride on the back of a pickup truck with their luggage as they flee Saudi-led airstrikes in Sanaa, April 6, 2015. - REUTERS/Khaled Abdullah

A coalition of states launched Operation Decisive Storm against the Houthi movement's Ansar Allah in Yemen March 26. After the Shiite group took control of the presidential palace in Sanaa, the military operation began hitting Houthi strongholds. The coalition consists of the Arab states of Bahrain, Egypt, Kuwait, Jordan, Morocco, Qatar, Saudi Arabia and the United Arab Emirates in addition to Pakistan and Turkey.

As the campaign enters its second week, questions are increasing about the role of the Egyptian forces involved in the operation. Egyptians are also anxious about the fate of fellow countrymen working in Yemen, of which there is no official count.

Al-Monitor had an exclusive interview with Youssef al-Sharqawy, Egypt's ambassador to Yemen on April 6 who returned to Cairo March 25 hours before the start of Operation Decisive Storm.

Al-Monitor:  What is the fate of the Egyptians working in Yemen? Are the Egyptian authorities evacuating their citizens, as happened in Libya? Is there coordination with Yemen’s neighbors to move the Egyptians there?

Sharqawy:  Air traffic between Egypt and Yemen was halted with the start of the military operation. One can leave Yemen only by land or sea. Indeed, we have taken practical steps to help the Egyptians in Yemen who wish to return to their country. The Egyptian Foreign Ministry has set up a national crisis center for Yemen, which I preside over personally. We are working 24 hours a day, seven days a week, taking calls from Egyptians who wish to return. We have also communicated with Yemen’s neighbors to coordinate the arrival of Egyptians there and then their return to [Egypt]. Contacts with Saudi Arabia, Yemen’s northern neighbor, resulted in an agreement to facilitate the passage of Egyptians through the Tawwal crossing in the city of Jizan — the crossing is open 24 hours — as well as the al-Wadia and al-Khadraa crossings, which operate only in the morning because they are located in mountainous areas and are accessed through rugged roads. We also agreed with Omani officials, through Egypt’s ambassador in Muscat, to open the al-Mazyona and al-Sarfait crossings so that Egyptians can exit through them. Regarding the sea route, those residing there should go to the sea port of Aden and then to Djibouti, where the Egyptian Embassy will receive them and secure their return to Egypt.

Al-Monitor:  Many Egyptians stranded in Yemeni cities have complained that the Foreign Ministry has not communicated with them to assist them. They also accused you of leaving Yemen and leaving [Egyptian] citizens there without help. How do you respond?

Sharqawy:  If the ministry didn’t communicate with them, then how were so many able to leave Yemen and reach Egypt? We have dedicated two phone lines for the operations room helping Egyptians in Yemen — 01211113235-36 and 01220463333 — which they use to contact us and discuss their problems. I do not want to talk about the accusations directed against me. All I care about now is communicating with the Egyptians there and coordinating with officials to facilitate the return of those who wish to return. This is the focus of the crisis center set up at the Foreign Ministry.

Al-Monitor:  A number of media outlets have reported the death of Egyptians at the hands of the Houthis in response to Egypt’s participation in the military operation. Is there any validity to these reports? Are there still Egyptians in the areas of conflict?

Sharqawy:  No Egyptians have been killed by Ansar Allah, but an Egyptian national was among those killed in the bombings of the Badr and al-Hashoush Mosques on March 20. The Islamic State claimed responsibility for the bombings. Given the difficulty of transferring the victim by plane, his body was buried in Yemen. Regarding your second question, we have no definitive figure for Egyptians who are still there, but we communicate with all those who call us to follow up on the stages of their return. I appeal to Egyptians working [in Yemen] to stay away from the areas of conflict, to be careful about their movements and to not go to the mountainous or remote areas, for their own safety.

Al-Monitor:  It was said that before Operation Decisive Storm, there were meetings that brought together a Houthi delegation headed by the group’s foreign relations official, Hussein al-Izzi, and officials of the Egyptian Foreign Ministry, and that you were among them. What happened in those meetings? Are you now communicating with the leaders of the Houthi Ansar Allah?

Al-Monitor:  Egypt is participating in the military operation by air and sea only. Will we see an intervention by troops on the ground, as happened in the Egyptian army’s war in Yemen in the 1960s?

Sharqawy:  I’m not the one who will decide about a ground intervention in Yemen. This goes back to the estimate of the supreme authority in the country and Egyptian national security considerations. Anything national security requires, Egypt will do.

Al-Monitor:  How do you see the future of the relationship between the Muslim Brotherhood and the Egyptian authorities, given that Yemen’s Muslim Brotherhood has supported Operation Decisive Storm and stood on the side of the Arab coalition?

Sharqawy:  I’m sorry. I don’t have an answer to this question. I will only say, "No comment."

Al-Monitor:  How is the war in Yemen going to end? Is it possible that we will see a dialogue between the warring parties, that is, between the Houthis and the legitimate government?

Sharqawy:  ​Continuing or ending the war in Yemen depends on how the political and military operations progress. And I hope that the conflicting parties return to the negotiating table to preserve Yemen’s unity and provide the country security, which would consequently achieve security for the Gulf states. Maintaining stability in the Bab al-Mandab Strait will preserve national security for the Red Sea countries and Egypt.

Al-Monitor:  ​How do you describe the Egyptian role in the war? Will Egypt have a role in establishing a dialogue between the conflicting parties in Yemen?

Sharqawy:  The military operation in Yemen is led by Saudi Arabia. Egypt, along with other states, is participating in the alliance to provide legitimacy. It will not result in a political role [for Egypt] nor [will Egypt] participate in starting a dialogue between the Yemenis, unless the parties concerned request that.