President Recep Tayyip Erdogan is setting up a massive electronic surveillance center in his palace to monitor the entire county. 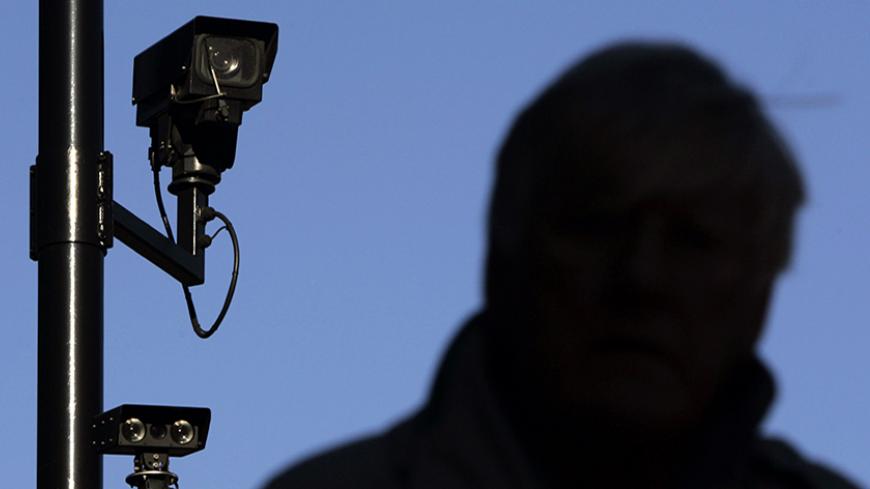 A security camera overlooks a man as he walks down a street, Nov. 2, 2006. - REUTERS/Luke MacGregor

President Recep Tayyip Erdogan has an insatiable appetite for control, and is what Westerners call a "control freak." Erdogan, who gathered the Cabinet at his palace despite the perceptible discomfort of Prime Minister Ahmet Davutoglu, who is technically the head of the council of ministers, has frequently tampered with the legislative process in the parliament; targeted the independence of the central bank, which dared not to heed his demands for lower interest rates; consolidated his hold over the judiciary and the police; used his personal contacts to keep the media under his thumb and enjoyed regulating the personal lives of citizens, including how many children they should have. His latest intervention was to prevent the former undersecretary of the National Intelligence Organization (MIT), Hakan Fidan, who had resigned, from running in elections and returning to his former post.

His newest venture is to set up a "Big Brother" system in his controversial palace. It may sound like an exaggeration, but from his control center, Erdogan will be able to keep an eye on 77 million Turkish citizens.

According to a Taraf report by Huseyin Ozay, 143 TV monitors at Erdogan’s White Palace control center will be used to keep an eye on all the closed-circuit television systems in the streets of 81 provinces through Turkey’s Mobile Electronic System Integration (MOBESE) system and transmissions from unmanned aerial vehicles (UAVs).

The technical infrastructure of this frighteningly ambitious project has been completed and is now being tested. All popular incidents, demonstrations, police and military operations will be monitored. Erdogan will thus be able to manage all the operations of the security forces from his palace.

In addition to UAV and MOBESE data, TV and 3G transmissions can also be monitored from the center. The Gendarmerie, Disasters and Emergencies Management Directorate, the Information and Communication Technologies Authority (BTK) and MIT will be linked there as well.

The MOBESE records of the entire country will be archived on three massive servers. The work station set up by the BTK will enable access to restricted information. In times of military operations, the data at the chief of staff's operations center will be transmitted to the White Palace control center.

There is currently a Crisis Management Center at the Prime Ministry. The chief of staff's headquarters houses its combat operations center in a bunker. In the newly completed Foreign Ministry building, there will be a special crisis center. The Shah Euphrates operation for the evacuation of the Tomb of Suleiman Shah in Syria was monitored by Davutoglu at the military operations center. With the new integrated system, Erdogan will be able to control developments from his palace.

Erdogan’s zeal to control all aspects of life in Turkey is surely becoming a top concern in the country. Erdogan is obsessed with maintaining control and cannot tolerate any opposition to his ambitions. For example, he targeted the Constitutional Court as “non-national” because it had ruled against his Twitter ban. Erdogan accused the central bank's governor, who refused to lower interest rates despite his persistent calls, of “selling out the country.”

Erdogan expressed his anger with social media platforms he can’t control, saying, "Every other day I am becoming more and more against the Internet."

Erdogan’s obsession became more pronounced after the Gezi Park protests and the December corruption investigations. Many legislative changes were introduced to appease his dislike of investigations and public pressure. The domestic security draft bill now in the parliament is the latest such attempt.

A president may find ways to avoid being labeled a dictator, but Erdogan, with his ambition to control everything in the country, won’t find it easy to avoid accusations of personalizing the state.