An agreement allowing the Russian navy access to ports in Cyprus sends a message to the EU and gives Moscow an alternative to its facility at Tartus, Syria. 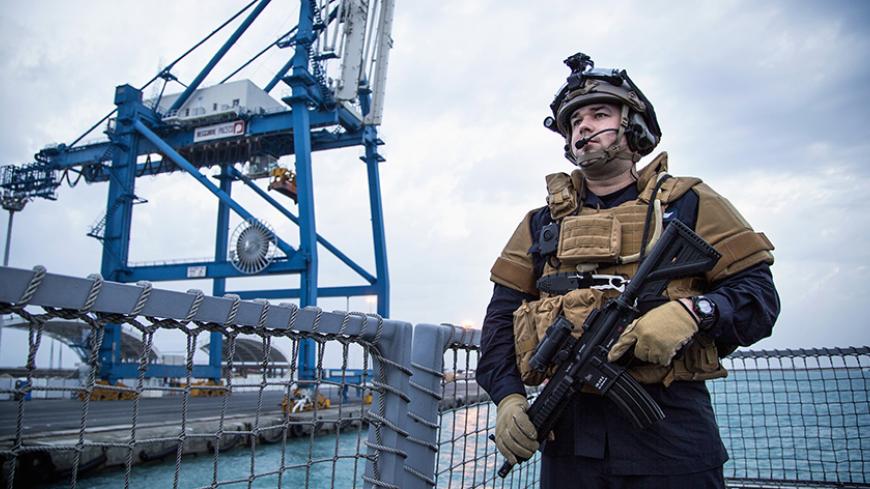 A guard looks on as the Norwegian frigate Helge Ingstad leaves the port of Limassol in Cyprus, Dec. 28, 2013. - REUTERS/Lars Magne Hovtun

The Russian navy’s new access to ports in Cyprus has both symbolic and practical importance for Moscow.

At a time when the European Union has imposed harsh economic sanctions on Russia and is trying to isolate the Russian government, the Kremlin is clearly relishing every opportunity to draw attention to cracks in Europe’s unity. Russian President Vladimir Putin’s recent visit to Hungary — complete with a natural gas supply deal — is one example of this; the Cyprus talks are another.

What makes Moscow’s pursuit of this political symbolism most obvious is how Russia’s official media are handling the story. The headline at Sputnik — a relatively new government-sponsored media organization targeted at foreign audiences — conveys this quite directly: “Russia Signs Military Deal with EU Member State.” In other words, Sputnik is telling Europeans “you may think you can isolate us, but you can’t even keep your own members from hosting Russian military forces.”

Of course, Russian officials likely want to reach audiences beyond the EU or the West in general. Another audience is domestic — to whom the deal says, “We are not quite as isolated as Western leaders claim.” Beyond this, given the island nation’s strategic location, regularized Russian naval access to Cypriot ports sends a message across the eastern Mediterranean region of the Middle East: “We are here to stay.”

The deal, which cuts interest rates on a 2.5 billion euro Russian bailout loan to Cyprus and extends payments from 2016 to as late as 2021, also makes two other important statements in the eastern Mediterranean. The first is that the Kremlin takes care of its friends; Cyprus is a particularly special friend as an offshore banking haven and the second-ranking source of foreign investment in Russia, though as even Putin acknowledges, “a large part of this is repatriated capital.”

​The second message is that Russia is able to help friends like Cyprus even at a time of great economic distress. Russian officials may see this as the most consequential idea to communicate at a time when most news from Moscow is assessing the impacts of low energy prices and a much-reduced ruble.

Cyprus President Nicos Anastasiades has perhaps unintentionally reinforced the case that the deal is more symbolic than substantive by insisting that it was a “renewed agreement” rather than a new one. Still, the agreement is not exclusively about symbolism — access to ports in Cyprus does have value for Russia’s navy, even if only for what Anastasiades described as port “calls with humanitarian aims, which are supplies of provision and refueling of vessels, as well as for rescue of lives of Russian nationals and their evacuation from neighboring countries.” After all, Russia’s naval replenishment facility at Syria’s port of Tartus is only about 150 miles (241 kilometers) from Limassol, a major port on the southern coast of Cyprus. With Syria’s civil war continuing with no end in sight, having an alternative to Tartus makes good sense (particularly since no one knows what the outcome of the war will be). Moreover, despite much excitement early in the conflict about the “strategic” role of the Tartus facility, in reality it offers little more than what Cyprus is willing to provide.

The port access is especially important in view of Defense Minister Sergei Shoigu’s declaration, “It has been decided to set up a navy department task force in the Mediterranean zone where naval forces will stay on a permanent basis.” The Moscow Times suggested that this “permanent” presence would allow Russia to “secure shipping access to the Suez Canal and extend its influence in the Middle East.” The paper added that the force would operate from either Sevastopol or Novorossiysk in the Black Sea, because Tartus could not support it.

A press officer from Russia’s Black Sea Fleet describes Russia’s current Mediterranean presence as a task force of 10 ships led by the destroyer Severomorsk, which has been detached from the Northern Fleet. It also includes vessels from the Black Sea Fleet and the Pacific Fleet. As Al-Monitor has previously reported, some of them participated in live-fire exercises with Cypriot and Israeli ships last fall.

Anastasiades said that Putin approached the agreement “delicately” and without putting Cyprus in a “complicated position” with its EU partners. He likewise made clear that Russia will not have a military base; some press reports had suggested this possibility. (Indeed, some Greek patriots hope for a permanent Russian naval base on this island. Before the trip, Anastasiades even suggested that Cyprus might provide Moscow with access to an air base for humanitarian missions, though subsequent reports do not suggest this was in the final agreement.)

​What remains unclear is how Turkey — a major Russian economic partner and a NATO member — will react if Greek Cyprus becomes a key logistical node for the Russian navy in the Mediterranean. Ultimately, however, Moscow doesn’t need much from Turkey beyond its treaty-based access to the Mediterranean; Ankara, by contrast, genuinely needs Russian natural gas. And Turkey’s role in NATO imposes sharp limits on its ties to Russia anyway, as does Cyprus’ EU membership. With both of these realities in mind, Putin may expect that he can manage the issue. After all, as Czar Alexander III famously said, “Russia has only two allies, its army and its navy.” Having signed the latest agreement with Cyprus, Putin has assured that one of those two long-standing allies will be in a somewhat better position to operate in the Mediterranean Sea.