Would 'sunset' of nuclear deal end restrictions on Iran?

The Nuclear Non-Proliferation Treaty would restrain Iran's actions in several ways after the terms of a prospective nuclear deal expire. 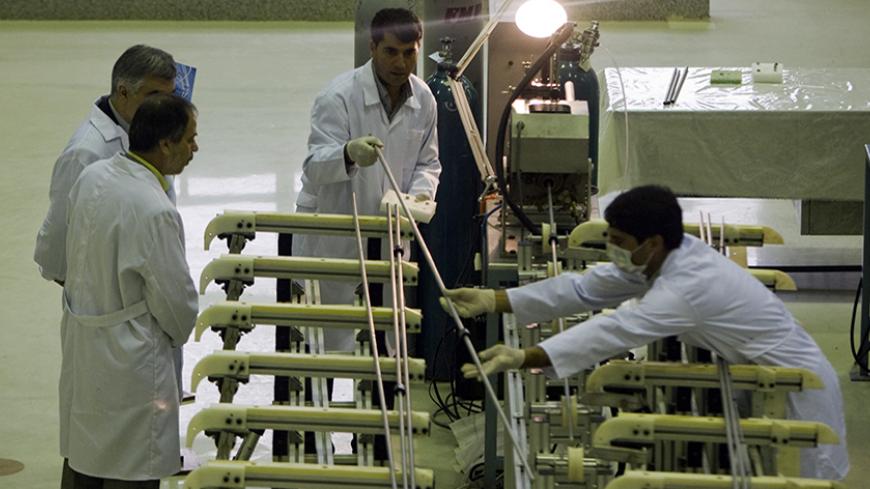 Fans and foes of the nuclear talks with Iran are offering sharply divergent views of what the not-so-distant future will look like.

To hear the Obama administration tell it, once Iran submits to rigid restrictions on its nuclear program for a decade or more, the country will still end up confined to a legal straitjacket.

"Iran is forever forbidden from building a nuclear weapon," Secretary of State John Kerry told lawmakers at a Feb. 25 hearing. "That is the nature of membership in the Non-Proliferation Treaty which they are a member of."

Critics counter that the international nonproliferation architecture looks more like a loose shirt baggy enough to conceal a nuclear warhead.

“This deal has two major concessions: one, leaving Iran with a vast nuclear program and two, lifting the restrictions on that program in about a decade,” Israeli Prime Minister Benjamin Netanyahu told Congress last week. “That's why this deal is so bad. It doesn't block Iran's path to the bomb; it paves Iran's path to the bomb.”

To help make sense of the debate, here’s a primer on the requirements — and limitations — of the Nuclear Non-Proliferation Treaty (NPT) that will continue to apply to Iran even after other restrictions "sunset."

What does it mean when the deal sunsets? Does that mean Iran can do what it wants after that?

No. Iran will be bound by the NPT Safeguards Agreement that it signed with the International Atomic Energy Agency (IAEA) back in 1974. That agreement requires Iran to agree to intrusive inspections aimed at verifying that Iran isn't diverting nuclear materials from its declared peaceful activities to a possible weapons program.

What if inspectors do find something suspect — what then?

That's what has critics so concerned.

For the first few years of a deal, sanctions would be gradually lifted but would remain on the books, ready to be reinstated in full if Iran violates its commitments. Once Iran is back to being a member in good standing, however, sanctions would be removed and Iran could go back to building up its nuclear infrastructure — as long as it keeps the IAEA up to date.

"Safeguards are not intended to prevent a state from gaining nuclear weapons; what they’re intended to do is provide timely detection of diversion of a significant quantity of material," William Tobey of Harvard's Belfer Center for Science and International Affairs told Al-Monitor. "So basically it’s an alarm bell if somebody tries to get a nuclear weapon, but it isn’t a barrier to it."

What would happen if the IAEA pulls that alarm bell?

Once the IAEA detects a problem, it may have to visit a site, take and analyze samples, study the results and present its findings to the agency's Board of Governors. That board could then refer the matter to the UN Security Council, which would need to schedule a meeting before voting on any sanctions — which could then be vetoed by countries such as Russia and China.

After Iranian violations were first divulged in 2002, it took four years for the first UN sanctions to hit Tehran. Democrats who are on the fence about the talks and want a vote know that history — and they're worried.

"The question is, is there a timely way to enforce international resolve if Iran starts to deviate from its commitments? That's the issue. So that you can block it effectively on an economic front before they have acquired a nuclear weapon," Sen. Ben Cardin, D-Md., told Al-Monitor. "There are ways that you can answer this, but to me you've got to have that nailed down in this agreement — you can't rely upon just the previous documents, because just the treaties themselves have not been effective."

What if Iran does have a covert program that it doesn't want the world to know about?

Good question. The original NPT agreements were "limited to facilities and activities that have been declared by the government." But after revelations in the 1990s that Saddam Hussein had been "clandestinely conducting a nuclear weapons program in parallel with its IAEA-inspected peaceful program," the Additional Protocol was created in 1997 that expanded inspectors' powers. It includes the ability to visit more facilities, conduct short-notice inspections and take environmental samples at declared and undeclared sites.

Think of it this way: While the Safeguards Agreement aims to prevent a "breakout" to the bomb, the Additional Protocol is focused on a "sneak out."

Iran signed the Additional Protocol in 2003 but stopped adhering to it three years later. It has never ratified it.

Will Iran have to submit to that extra scrutiny?

It sure looks that way.

The Joint Plan of Action (JPA) agreed to in November 2013 requires Iran to: "Fully implement the agreed transparency measures and enhanced monitoring. Ratify and implement the Additional Protocol, consistent with the respective roles of the President and the Majlis (Iranian parliament)."

Some experts, however, point to Iran's failure to abide by such commitments in the past is cause for concern.

"This is an important issue because Iran has, in the past, agreed to implement the Additional Protocol and then revoked that agreement," Tobey said. "This is a provision that, in my view, must be seen to be believed."

It looks like inspectors will be able to probe both declared and undeclared aspects of the nuclear program far into the future. So why are negotiators worried about Iran's past activities?

A key stumbling block for a deal remains Iran's failure to answer the IAEA's questions about "the possible military dimensions" of its nuclear program. The agency still has 12 questions — 11 of which remain unanswered — about activities that seem to indicate Iran has worked on creating an atom bomb.

The 2013 JPA requires Iran to "fully implement the agreed transparency measures and enhanced monitoring." But negotiators acknowledge that this issue is one of the toughest to resolve.

"Is it worth blowing up a potential agreement in the name of forcing a confession?” one former US negotiator told The New York Times.

How does this affect future oversight?

Experts like Tobey argue that without a full accounting of past Iranian practices, the IAEA inspectors can't do their jobs.

“If you don’t get to the bottom of those — if you don’t know who did what, where and when — you don’t have a baseline from which to monitor going forward,” Tobey said. “So the probability that the IAEA would be able to detect undeclared activity goes down.”

What’s the proper time to wait before treating Iran like any other non-nuclear state?

It depends who you ask.

The Obama administration say it wants to be assured that Iran’s program is “exclusively peaceful” before the current restrictions and sanctions sunset. Recent reporting by the Associated Press and others suggests nuclear restrictions could start to be lifted in about a decade. President Barack Obama himself has talked of a number of years in the "double digits."

Others say a wholesale change of attitude in Tehran is in order first.

"Before lifting those restrictions, the world should demand that Iran do three things," Netanyahu told Congress. "First, stop its aggression against its neighbors in the Middle East. Second, stop supporting terrorism around the world. And third, stop threatening to annihilate my country, Israel."

Isn't there a middle ground — one that's focused solely on the nuclear issue?

Tobey seems to think so.

"What we should be looking for is evidence of an Iranian strategic decision not to pursue nuclear weapons," he told Al-Monitor. "If we were assured that we knew exactly what they had done and that it has stopped, and were in a position to monitor that it was not recurring, that would give me some confidence.”

Some critics make the case that treating Iran like other "normal" actors could unravel the nonproliferation system. What's their argument?

In a word: trust.

If other countries in the region (cough, Saudi Arabia) see Iran start to ramp up its nuclear production, even if it's all above board, they may feel compelled to follow suit. Under the NPT, Iran could theoretically once again enrich uranium so that it gets within a couple months of being able to break out to a bomb, and its rivals may well decide that they can't afford to risk being left behind in the race to a bomb.

"The NPT is really a collection of different bargains, and one of the bargains is among non-nuclear weapons states that it would provide some transparency — some assurance — that one’s neighbors aren’t pursuing a nuclear weapon. So that means you don’t have to ramp up your program,” Tobey said. “It may be that some countries in the region say, 'OK, if in 10 or 15 years Iran can be two months away from a nuclear weapon, I’m going to put myself in the same position.' So then you’ve got the equivalent of a bunch of cowboys walking down the street with their hands poised just above their pistol ready to draw."