Gen. Khalifa Hifter’s attempt to mobilize an army against the Islamic State in Libya might backfire if its members are comprised of former militiamen who lack discipline. 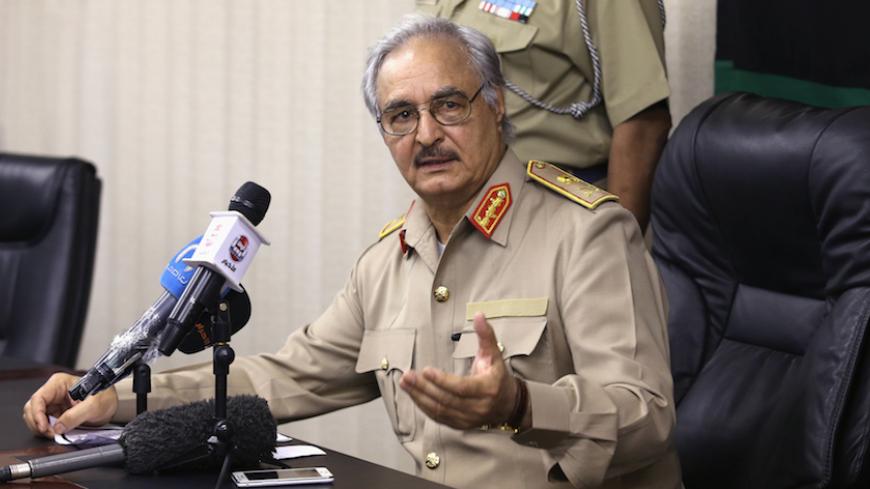 Gen. Khalifa Hifter’s attempt to mobilize an army against the Islamic State (IS) in Libya might not yield tangible results, as this army is made up of civilian volunteers with little fighting experience.

Libya’s Tobruk-based parliament, known as the Council of Representatives, and its internationally recognized government have been calling on the United Nations to lift the arms embargo imposed on Libya by UN Security Council Resolution 1970 in February 2011.

They argue that Libya needs to be able to buy military hardware for its army to fight extremists in the country, particularly in the east.

The fundamental question: Does Libya have an army that qualifies for legal arms purchases?

On March 2, the Council of Representatives confirmed Hifter as the new army commander after promoting him to the rank of lieutenant general, indirectly endorsing two of his stated goals: to rid the country of extremists and build a national army. Such were the goals of Hifter when he first appeared on the Libyan scene last May, except for one thing: IS in Libya was neither visible nor active at the time. Even without IS to contend with, Hifter has so far failed to achieve either a security or outright military victory in Benghazi, let alone across Libya, where his so-called army has been battling Ansar-al Sharia since May 2014.

Hifter was until recently considered by Prime Minister Abdullah al-Thinni to be no more than a militia leader. Whatever the chemistry between the prime minister and Hifter, the basic question remains whether Hifter, in his new role as army chief, has an army to command that will appear to the Libyan public as a national force able to bring peace and security to the shattered country.

The simple answer is no. There is neither an army nor consensus among the various Libyan factions about having an army. Indeed, Hifter managed to surround himself with some Libyan army units in eastern Libya. These units were spared from NATO’s destruction in 2011, since the alliance did not conduct any air raids in eastern Libya. Though these units included many professional high-ranking officers, they hardly constituted an army in the professional sense, let alone one able to convince a suspicious public of its efficacy.

Most of those fighting under Hifter’s command are civilian volunteers and recruits with little training or expertise in military operations. They lack military discipline and possess little of the technical knowledge required to effectively handle heavy weaponry. Such is Hifter's situation since the remnants of the former Libyan army were either purged or sidelined. Many of these civilians had experience in fighting against the former regime, either under NATO’s guidance or within the ranks of various militias. These experiences shaped their personalities while also poisoning their minds with a code of behavior that counters the ethics of a professional army.

Proponents of Hifter might say that he has to start somewhere, otherwise the project of building an army will never take off. While that might be true, the wrong start will only condemn the project to failure, making it difficult to reset everything in later stages.

Former militia members, hardened by past fighting experiences, will always behave as if they are in a militia. These fighters cannot be recycled into a professional, disciplined army that serves a national agenda that contradicts the very idea of belonging to a militia. It might be tempting to incorporate militias into the army; however, this is only a short-term solution that will cause a long-term problem.

Hundreds of young Libyans enlisted as "revolutionaries" during the civil war from March to October 2011, and most of them never disbanded once the war ended, since they had nothing else to do. Over the last four years, many of these young fighters — usually uneducated — joined different militias and gangs that committed all sorts of crimes against civilians and the state alike.

Many of them fought for money — as promised by the National Transitional Council — not for some noble cause. For example, in July 2014, Libya Dawn militias overran the capital, where the majority of foot soldiers were paid young men who were recruited specifically for that battle. In eastern Libya, the Cyrenaica army, made up of civilian recruits, has been actively assisting Hifter’s Operation Dignity — launched in 2014 to crush the Islamists — only because they want their region, Cyrenaica, to be autonomous again, as it was on the eve of its independence in 1951.

Conspicuously enough, neither the Tobruk-based government nor Hifter have much to say about the remnants of the Libyan army in western and southern Libya. These former soldiers are still on the government payroll while they sit idly by as their barracks are taken over by militias.

While many of those units were destroyed by NATO’s brutal airstrikes in 2011, many are still intact. Accused of supporting the former regime, hundreds of professional officers with decades of experience have been made unofficially redundant. This is partly due to the now annulled political isolation law barring them from serving their country, as well as to successive governments not asking them to report to their units since 2011. Apart from a few hundred who constituted the experienced bulk of the Zintan militias — who later aligned themselves with Operation Dignity — thousands more former professional soldiers are still off duty.

Rather than start from zero with little guarantees as to the outcome, Hifter and the government should bring in as many of those redundant professionals as possible, particularly those not implicated in any violence against civilians during the war four years ago. Enlisting former militia members will not build hope for the Libyan army; these militia members will destroy it from within. Such individuals will only be loyal to their militias and factions, even within a national army. This has been the case in Iraq, where the professional army disbanded right after the 2003 US-led invasion.

To avoid repeating such mistakes, the Libyan government should put in place a rigorous screening mechanism before accepting any new conscripts to make sure that they are not only physically fit but also are not militia members. Otherwise, the new soldiers will be no more than former militiamen in uniforms.