One Palestinian's quest for a US visa

After being granted a scholarship to study in the United States, a Palestinian media lecturer struggled to reach the US Consulate in Jerusalem, where he was shocked to see Palestinians and Israelis being treated equally. 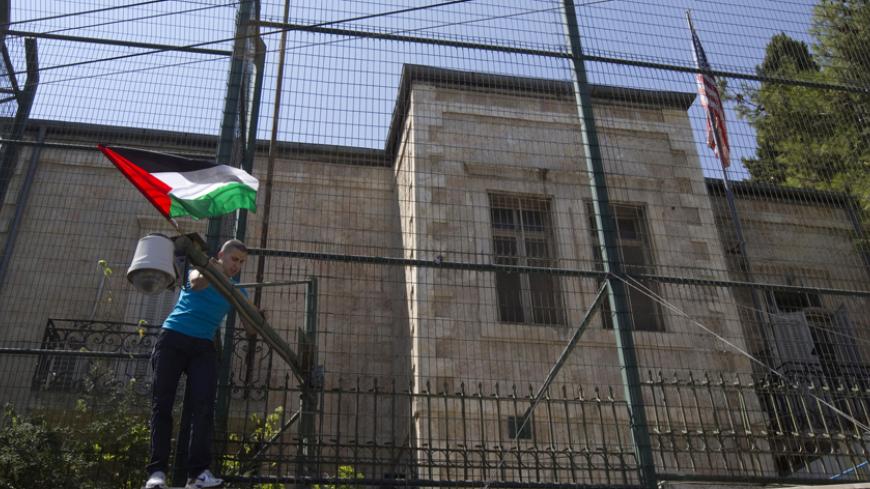 A man places a Palestinian flag on a fence surrounding the US Consulate during a rally in support of Palestinian President Mahmoud Abbas' bid for statehood recognition in the United Nations, in East Jerusalem, Sept. 21, 2011. - REUTERS/Ronen Zvulun

When "Mahmoud" won a scholarship to get his Ph.D. from a US university, he was ambivalent. After all, he had always been politically opposed to the Americans because of their foreign policy even though he was impressed by their democracy. In fact, Mahmoud, a lecturer on media ethics who asked to use a pseudonym because of the sensitivity of the subject, is not a big fan of the Palestinian president, and US ally, Mahmoud Abbas. Despite Mahmoud's father having been a Fatah leader, he has generally voted for Hamas candidates in student council elections and did so as well in the decisive 2006 parliamentary elections, which Hamas swept, winning 74 of the 132 Palestinian Legislative Council seats.

After Mahmoud's paperwork was finalized and his documents arrived from the United States, all that remained was an interview at the US Consulate General in Jerusalem, but there was a problem: Jerusalem was beyond the wall, and the only way to reach the city was to get a permit from Israel. Mahmoud and his wife applied for permits, and she was immediately approved. His application was held up; the requirements for security clearance for Palestinian women are usually much lower than those for men. As the interview neared, Mahmoud still had no permit. He began thinking about a plan B. A work colleague from Jerusalem offered to drive him into the city using the settler road, where soldiers don’t usually check every car, but that worried Mahmoud.

What would happen to his colleague if they were stopped? Would the US officials punish him if they found that he had been "smuggled" into the city? He had an official letter from the US Consulate showing that he had an interview, but friends told him that soldiers only accepted Israeli-issued permits in the city, which Israel unilaterally annexed following the 1967 war and subsequent occupation.

Another issue that worried Mahmoud was how to deal with his wife, who did have a permit. Some of his friends suggested taking her with him, because it might help ease any potential confrontation with soldiers since she had a valid permit, but the regulations are very clear: Palestinians with a permit must only use the Qalandia checkpoint and not the Anata checkpoint, which is used mainly by Jewish settlers from Maale Adumim. Another problem was that Arwa's veil would stand out like a sore thumb and almost certainly mean that their car, even with Israeli license plates, would be stopped.

When Feb. 25 arrived, the day of the interview, and there was still no permit, Mahmoud and his Jerusalem friend decided that Arwa would go through Qalandia, and the two of them would risk the settler checkpoint. They passed without being stopped. Mahmoud was finally in the city Palestinians hope will one day be the capital of their independent state. He collected Arwa and made it to his appointment at the consulate.

The interview went well, and the consul staff member, who seemed to have enjoyed conversing with Mahmoud, told him he would be issued a visa within a week. She didn’t even ask about Arwa, who would be traveling with him to the United States.

The experience at the consulate thoroughly surprised Mahmoud. Waiting in line for interviews were both Israelis and Palestinians. Everyone was treated the same. Commenting to Al-Monitor afterward, Mahmoud noted that this was the only place in Israel and Palestine where Israelis and Palestinians are treated equally: “No discrimination, no separate road or checkpoint. Everyone waited for their turn, and all were given equal treatment.” What surprised Mahmoud most was when a Palestinian security guard working for the consulate asked an Israeli wearing army fatigues to respect embassy policy and change. The soldier obliged immediately.

The adventures of Mahmoud and Arwa are common in Palestine. So long as the unchecked military occupation continues without international accountability or end in sight, its inherent racism and discrimination will continue to dominate the lives of Palestinians living under occupation. For most people, the idea of being treated equally while waiting in a line is so normal they don't even think about it.

For Palestinians, who have lived for 47 years under an Israeli occupation that is involved in every aspect of their lives, these small stories mean a lot. The idea of improving conditions and developing some kind of enlightened occupation does not and will not work. The only way to resolve this decades-old problem is to put an end to one people’s rule over another.

Mahmoud and Arwa will spend a few years in the United States. He will return to the West Bank with a PhD and most likely get a better-paying job than the one he currently has. The story of Mahmoud and Arwa, especially the travel blues, is typical for the embattled Palestinian population. Even for those who have no reason to travel, the idea of being barred from traveling, especially to the city of Jerusalem, riles them, but their anger is ignored by Israelis who have done little to end this discriminatory policy.