As Israel eases restrictions on Palestinian Muslims visiting Jerusalem during the month of Ramadan, some see it as an extension of the occupation while better managing the crisis. 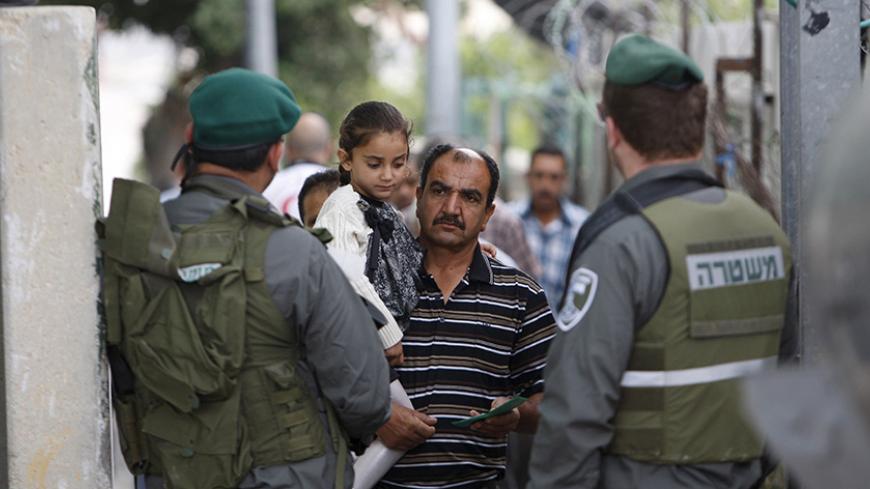 A Palestinian man carrying his daughter shows his identity card to Israeli border policemen as he makes his way with other Palestinians to attend the second Friday prayer of Ramadan in Jerusalem's Al-Aqsa Mosque, at an Israeli checkpoint in the West bank city of Bethlehem, June 26, 2015. - REUTERS/Mussa Qawasma

When Mohammad Badarneh made it to Jerusalem, he was in awe. He spent hours walking the streets of the Old City, praying at Islam’s third holiest site, Al-Aqsa Mosque, and visiting the Church of the Holy Sepulchre, while posting pictures of what he saw on his Facebook page. Badarneh, who hails from the northern West Bank city of Jenin, now lives in Ramallah where he works as a reporter for Palestine TV. He was one of tens of thousands of West Bank Palestinians who visited Jerusalem in the first week of the month of Ramadan, which began June 17.

While men over 40 and women of all ages are allowed into Jerusalem without a permit, Badarneh, 25, needed the coveted tasreeh, the physical paper permit, to pass through the Israeli checkpoint.

Thousands of travelers were issued permits on the eve of Ramadan by the Israeli army’s Coordinator of Government Activities in the Territories Unit to the surprise of many, including the Palestinian leadership. It isn’t clear what motivated Israel to carry out its far-reaching travel relaxation policy. Is it a genuine first step toward dismantling the occupation, or is it a sign that Israel intends to keep the occupation for a long time and wants to better manage this crisis?

Israel’s unprecedented travel relaxation included, for the first time in 15 years, permits to 500 well-vetted Palestinians to travel abroad via Ben Gurion International Airport, and a similar number of Palestinians from the Gaza Strip to travel to Jerusalem via the Erez crossing. A further 50 Palestinian journalists were given permission to enter the holy city to produce reports on Ramadan festivities and general life in Jerusalem.

The tens of thousands of Palestinians, like Badarneh, who rushed to visit Jerusalem and travel to other locations in Israel welcomed the decision and celebrated it. Others argued that the decision reflects a more confident Israeli policy that is looking toward making the current status quo permanent.

Officially, the Palestinian government has refused to be involved in the Israeli actions. But Mohammad Masharqa, a senior adviser to the Palestinian Embassy in London, told Al-Monitor that the Israeli action is aimed at managing the conflict rather than resolving it. “To ease the external pressure on them, Israel is trying to remove some of the pressures on the local Palestinian population. This is a clear sign that they [Israel] are more interested in managing the Palestinian-Israeli conflict rather than solving it, because solving it requires major concessions.”

Masharqa believes international solidarity with Palestinians and the boycott, divestment and sanctions movement certainly play into the Israeli decision-making process. “The Israelis noticed the changes in Europe and have made a decision to make some calculated humanitarian concessions rather than give up their occupation and control,” he told Al-Monitor in a phone interview from London.

On June 22, Palestinian political commentators dubbed the Israeli action a public relations stunt aimed at defusing any effort for a serious political process. Ahmad Azzam, a political science professor at Birzeit University, espouses the argument that the Israeli action is nothing more than a public relations act. “The idea of easing travel and speaking on Palestinian media to congratulate Muslims on the arrival of the month of Ramadan is aimed at lessening the tensions and beautifying the face of the Israeli occupation,” he argued on the website Amin.org on June 23.

Azzam recalled the pre-election promise by Israel’s Prime Minister Benjamin Netanyahu not to see a Palestinian state on his watch and the Israeli opposition to the French diplomatic effort as evidence of this Israeli policy to manage the conflict. On June 22, Netanyahu rejected the French peace effort that would take the shape of a UN Security Council resolution, calling it “international dictates.”

But while the Palestinian leadership refused to take any part in the Israeli scheme, some businessmen complained that the sudden loss of captive customers meant that the lucrative Ramadan business was going to be spent in Israel.

Other problems arose quickly as the sudden influx of Palestinians overwhelmed the local bus company that carried Palestinians from the Qalandia checkpoint to Jerusalem. Holders of the permits who are not allowed to use their own cars had no choice but to use the available public service at the checkpoint.

An effort to guarantee the return of the travelers using the same bus company by forcing them to buy return tickets as well, led to a major bottleneck in Jerusalem.

The problems of business loss and the bus company, however, dwarfed in comparison with what would happen in the following days. An Israeli settler was shot dead near Ramallah on June 19, and a Palestinian from a town near Hebron stabbed an Israeli soldier at the Damascus gate in Jerusalem on June 21. Yaser Tarweh, a university student, was shot seven times by the same Israeli soldier, and both were left in critical condition. An amateur video shot by bystanders showed the Palestinian youth’s body soaked in blood as a woman urged him to repeat Islamic religious creed.

The violent acts, deemed individual lone wolf cases by the Israeli army, didn’t result in any immediate reversal of the travel decisions. Israeli media reported that arguments between the political leadership and the security forces ensued, with the Israeli security officials convinced that these were individual acts and preferred not to make widespread responses.

Israeli politicians, wanting to show the Israeli public that they didn’t sit idly by, insisted on action. In the end, the airport travel permits were rescinded and the travel permits of the residents of the village Sair, where Tarweh came from, had their travel permits rescinded the following day. Later and as a result of a rocket that came from Gaza, the permits for 500 Gazans to visit Jerusalem were also canceled. Israeli officials admitted that they were sure that Hamas — which controls Gaza — didn’t shoot the rockets, but nevertheless, they held the Islamic militants responsible for what happened.

Despite the violence and the rescinding of some of the earlier decisions, Israeli officials appeared to be generally pleased by how the situation had evolved. On June 22, officials told the Israeli independent daily Haaretz that they were “satisfied” with the way that first week of Ramadan went.

Badarneh visited Jerusalem a few hours after the stabbing. He found the city as near to normal as possible. “Everything seemed normal, even the nearby coffee shop was operating as if nothing had happened,” he told Al-Monitor, supporting the general consensus that Israeli security is looking at the larger picture with the long-term aim of managing the conflict for the foreseeable future.