Who's to blame for deaths of children fighting in Palestine?

Palestinian children are dying in armed operations against Israeli settlers, despite calls to prevent them from getting involved in the violence. 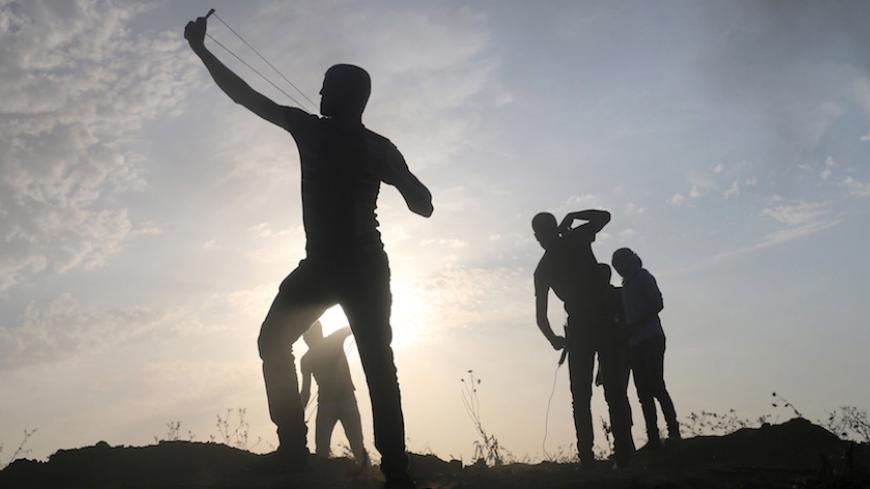 A Palestinian protester uses a slingshot to hurl stones toward Israeli troops during clashes near the border between Israel and the central Gaza Strip, Oct. 20, 2015. - REUTERS/Ibraheem Abu Mustafa

RAMALLAH, West Bank — Taha al-Qatanani said he was expecting just an ordinary day as his daughter headed out the door early Nov. 22. He had no way of knowing she would never return.

"I thought Ashraqat was going to school when she left the house," he said of his 16-year-old daughter, who was killed that day at the Huwara checkpoint south of Nablus after allegedly trying to carry out a stabbing attack against Israelis.

Commenting on recent controversy over children participating in the Palestinian resistance, he said, "It is hard to stop the youth from doing what they have in mind — even if their plan goes against the will of their parents. It is difficult to control them."

He told Al-Monitor, “I was against engaging children in these operations and allowing them to go to checkpoints, and I publicly declared my position on mosque pulpits during Friday sermons. But after Ashraqat died, I found myself obliged to abide by her choice and defend the heroic act that she committed."

Qatanani works as a preacher in the mosque of Askar refugee camp in eastern Nablus, where he resides. He now thinks he was wrong to believe he could isolate children from their surroundings. “My daughter was influenced by the killings taking place. Children are part of the reality we live in. She failed to carry out a stabbing operation and died.”

Qatanani said he is insulted by the calls made by some Palestinian media figures and intellectuals on social networking sites and through the media to stop the so-called engagement of children in resistance operations. He said such debate is an attempt to rid Israel of its responsibility in the killing of these children.

He added, “It is shameful how some [critics] believe that the lives of our children are dearer to them than to us. This is my daughter. I had a very close and vital relationship with her, and she suddenly died. It was not easy to cope with her death, but my sorrow cannot stop me from respecting her choice and conveying her message to the whole world.”

Media figure Mohammad Rjoub was among the first who called out against involving children in the operations, which began escalating Oct. 1. On Nov. 22, he wrote on his Facebook page: “Pay attention to your children.… Fifty days into the current developments, the silent majority still has not dared oppose our children carrying out stabbing operations. My impression is that the majority is against such acts. This is what my job has led me to conclude, though I may be wrong.”

The Palestinian Ministry of Health estimates that from Oct. 1 until noon Dec. 16, 125 Palestinians were killed in the resistance, including 25 children. The ministry places the number of wounded during that time at 14,740, including 550 children.

During an interview with Al-Monitor, Rjoub said the stories of these children prompted him to take action. He particularly mentioned Hadeel Awad, 14, from the Qalandia refugee camp, who died while allegedly trying to stab an Israeli settler Nov. 23 in occupied Jerusalem.

According to Maliha Awad, her daughter undertook an operation to avenge the death of her brother Mahmoud, who was killed two years ago by Israeli forces when they invaded the Qalandia refugee camp north of Jerusalem. “Hadeel was the closest to Mahmoud, and she has been sad since his martyrdom,” Awad told Al-Monitor.

Rjoub said he has talked to the parents of victims and told them to watch out for their children. "Morally speaking, [children] should not be involved in military action and nationally this is not their role; their role is to stay in school,” Rjoub said. “We need a comprehensive awareness campaign with the participation of parents, schools and the media.”

Ammar Dweik, director of the Independent Commission for Human Rights, shares Rjoub’s point of view. In spite of everything they experience, children are not aware of the consequences of their actions, he said.

"The occupation is a criminal responsible for killing children, without them posing any real threat to Israel,” he told Al-Monitor.

However, Dweik believes Israel's role does not exempt society from its responsibilities toward children. Parents and institutions should talk with children to spread awareness and avoid the glorification of participating in resistance operations. Schools should allocate time to address psychological issues and focus on the fact that a child's role is to study — not to take action that "puts their lives in real danger.”

On the other hand, Alaa’ al-Azzeh, an anthropology professor at Birzeit University, said Israel’s practices alone are enough to motivate children without any outside encouragement or glorification. According to Azzeh, children are all too aware that they are subject to colonial practices and that their role is to resist and put an end to those practices.

“The colonial violence against Palestinians is quite visible and very difficult to hide from children, who are well aware of the seriousness of their actions and their repercussions. This full awareness stems from a volitional consciousness that is not misled by some party or the result of incitement,” he said.