Studies indicate that Israelis are adepts of cellphones and the WhatsApp application, which enable them to receive constant updates on the security situation and reconnect with family members at any given moment. 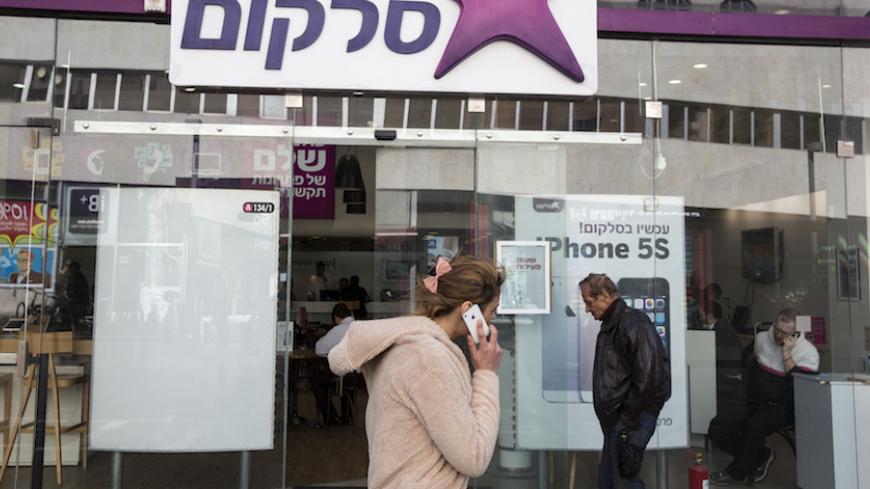 The March 4 Purim party hosted by former President Shimon Peres at the Peres Center for Peace reflected exactly what you would expect of festivities marking the happiest holiday of the Jewish calendar. The guests arrived dressed up in fancy costumes, the bar kept dispensing drinks all around and dance music played in the background. But for a while, the evening's top attraction could be found at the far end of the entrance lobby.

Seated, the former president welcomed his guests, unrecognizable for the most part behind the Purim masks and makeup. The guests stood in line, waiting, trying to approach the host. Each guest — even those disguised as historical figures — pulled out their cellphones and in turn took "selfies" with the former president. It seemed as if all of them, ambassadors, journalists and businessmen alike, made sure to win this "prize." What would be the point of attending a party hosted by Peres if one can't upload a photo on their Facebook page that will surely receive many likes and shares? After all, if you don't get the picture, you were never there.

The world over, people are connected to their cellphones, but in Israel, it is pathological. A survey conducted on behalf of Google indicated that in 2013 Israel was first worldwide in market penetration of mobile phones. Hananel Rosenberg, from the Hebrew University of Jerusalem's Department of Communication and Journalism, who studies the impact of cellphones on behavior, said that Israel was at the top of the smartphone market penetration list for two whole years — leading over South Korea and Singapore.

No less than 730,000 smartphones were sold in Israel over a period of three months alone, in the third quarter of 2014. According to Rosenberg, “In recent years, Israel was [consistently] ranked first in the world in the number of mobile call minutes, and second, after Japan, in the number of apps downloaded by users. The use of cellphones among Israeli youths is even more extensive and excessive.”

Rosenberg cites a 2014 study conducted at the Chaim Sheba Medical Center (Tel Hashomer) that surveyed about 1,500 teenagers. It was found that 81% of children up to age 12 had already been using cellphones, while 94% of teens aged 13 to 15 were in possession of a cellphone.

Notably, Israelis stand out in their use of the mobile messaging app WhatsApp. A 2013 survey showed that 92% of smartphone owners in Israel uploaded this application. Rivka Ribak, from Haifa University's department of communication, who studies the role of technological devices in our lives, said, “In the United States, this application is hardly in use. In Israel, WhatsApp is widely used, and, in particular, WhatsApp family groups are unique to Israel, setting it apart from the rest of the world.”

Indeed, the researchers with whom I spoke are unanimous on the role of WhatsApp contributing to the Israeli cellphone addiction. Ribak said, “Studies show that parents in Israel have warmer and more easygoing relations with their children than parents in other countries. The three-generational family unit consisting of grandfather and grandmother, mother and father, and boy and girl is distinguished by the close ties between its members, as reflected inter alia in the use of the application as a distinctive communication tool within family groups.”

According to Rosenberg, “Israeli family cohesion — no doubt very strong when compared to the [typical] European family — provides legitimacy to the intensive and close mobile communication between parents and children.” In fact, the 2014 report of the Israeli telecommunications group Bezeq shows that 70% of app users have a WhatsApp family group, while 80% of cellphone owners have the app installed on their device. WhatsApp groups have actually become social networks in themselves.

In a July 2014 survey conducted by the Israel Internet Association, half of the respondents said that they were members of more than six WhatsApp groups. According to Rosenberg, “It is characteristic of the Israelis. In any case, with or without the familial aspect, [the use of] WhatsApp is a leading phenomenon in Israel.”

In recent years, the application has been increasingly used to spread false information and rumors. The trend reached new peaks during last summer’s Operation Protective Edge in the Gaza Strip. The launch of the operation and even its code name were leaked through the app, spreading like wildfire several days before the Israeli government's official announcement. Throughout the military operation, rumors spread on the network regarding the wounded and dead. Some of those rumors even reached the families concerned. At the same time, various false reports were circulated, including warnings of massive bombardments of central Israel that Hamas was allegedly planning.

The shaky security situation in Israel is often cited by researchers from different disciplines as an explanation for the local mobile phone and WhatsApp craze. “We [Israelis] are in the habit of catching up on the news every half hour,” said Oren Kaplan, a psychologist and economist who serves as dean of the School of Business Administration at the College of Management Academic Studies. “There is something most addictive about mobile communication. In a sense, it is a breaking news channel — keeping you updated at all times, and thus answering the need of Israelis to know what’s going on at any given moment.”

Rosenberg agrees, “Security concerns are seen as justifying the use of cellphones, even by very young users. Parents provide their children with cellphones to make sure that they can be reached at all times and thus allay their fears.”

Cultural factors come into play here as well. For example, Israelis are apparently far less reserved than Westerners and don’t think twice about managing their personal affairs in public. On the Paris Metro, passengers can be seen immersed in books or leafing through magazines; those preoccupied with their cellphones are mostly communicating through text messages. In contrast, on any typical railroad car in Israel, one is quite likely to bump into at least one passenger who couldn’t find a better place to argue on the phone with his spouse or to settle work matters. Indeed, there are virtually no cellphone-free spaces in Israel. In restaurants, public transport, waiting rooms and even at the movies, people are answering phone calls.

We are, after all, a “startup nation.” Israelis are quick to adopt new trends, oftentimes to the extreme. And it isn’t just technological innovations that Israelis enthusiastically embrace, but fashion and social trends as well. “Why are we so open to change? It is indeed a big question,” Kaplan said, reflecting on the issue. “It’s possibly the 2,000 years of exile that have made us sensitive to change, and taught us to adapt to the changing circumstances. It is in our DNA, having been [for so long] a persecuted nation of immigrants.”