Indications that Prime Minister Benjamin Netanyahu might lose the elections have driven some 200 foreign correspondents to Israel as the European Union follows closely. 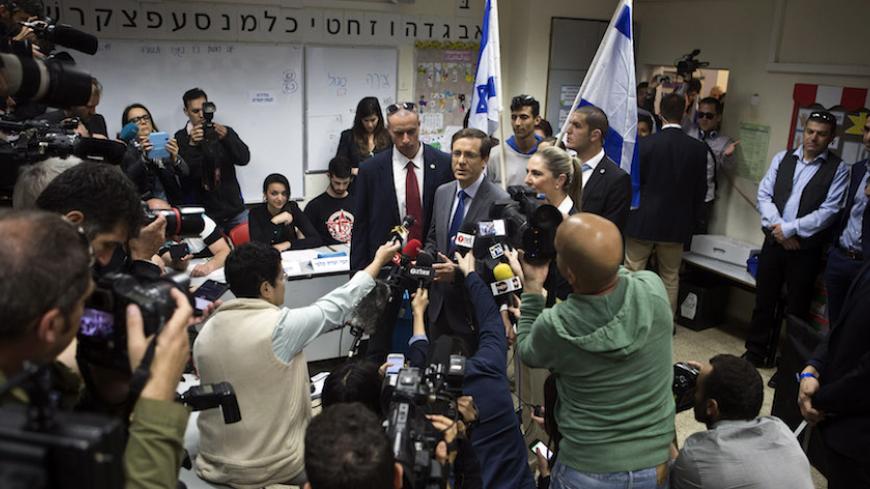 Isaac Herzog (C), co-leader of the center-left Zionist Camp, speaks to the media after voting in the parliamentary election at a polling station in Tel Aviv, March 17, 2015. - REUTERS/Nir Elias

When the polling stations close in just a few hours, Israeli TV will release the results of the 2015 election's exit polls. At time of writing, the Foreign Ministry in Jerusalem had no information about Israeli missions abroad that are planning to host election parties — the kind of traditional diplomatic event to which top journalists, politicians and opinion-shapers are invited, so that together they can watch the celebration of democracy at the end of election day.

One Israeli diplomat serving at a major embassy in Europe told Al-Monitor on condition of anonymity that most journalists who cover foreign affairs in the capital, where he is posted, have decided this time to go to Israel themselves, so that they can get a bird’s eye view of what the local media is describing as Israel’s most riveting and important election ever. “What is happening and what could happen suddenly seems interesting to them,” the diplomat said.

The director of the Government Press Office, Nitzan Chen, told Al-Monitor that his staff is serving a record number of journalists who came to Israel to cover election day, saying, “Twice as many journalists, about 200, have come to cover these elections as came to cover the 2013 elections. And they keep coming.”

International attention on the elections reached a turning point when a growing number of assessments predicted that Prime Minister Benjamin Netanyahu could actually lose power. Foreign diplomats serving in Israel claim that once the possibility of significant political change in the composition of the government — and not least the person heading that government — became tangible, staff covering the region in various foreign ministries around the world started asking for more and more updates. Reports from Israel were in greater demand and received increasing attention.

The possibility that Netanyahu might lose has evoked considerable interest, not to mention high expectations and a longing for some dramatic policy changes to be announced by the new government in Jerusalem. One European ambassador notes that his reports emphasize that the Zionist Camp has a growing lead over the Likud, a consistent trend in all the latest polls. In the same breath, however, he also tries to temper the euphoria with which this news is received at home. Even if the polls prove true, he reasons, the Zionist Camp will have a hard time putting together a coalition, and even if it does, it has yet to be seen whether this new coalition will implement a significant policy shift.

The European Union constantly reiterates that its attitude toward the new Israeli government will depend on its commitment to negotiations with the Palestinians. One European official involved in Israel’s day-to-day agenda who asked not to be named explained, “What concerns us is not social welfare programming, the handling of the housing crisis or the cost of living, but the peace process.” The EU has avoided presenting to the Israelis officially what the implications of their choice at the ballot box will be in regard to the European approach to Israel, and subsequently, on their lives. Nevertheless, the Europeans already have plans in place for three possible scenarios.

If Zionist Camp leader Isaac Herzog puts together the next coalition and becomes prime minister, Europe will show patience and tolerance toward the State of Israel, based on the assumption that one of the new government’s clear objectives will be ending the occupation. If the election results allow Netanyahu to remain in the prime minister’s office in Jerusalem as head of a right-wing coalition, Europe will wait no longer.

“We haven’t got the patience to assess whether [Netanyahu] wants to advance the diplomatic process, because we already know all about his positions and actions,” said the same European source. And what if Netanyahu and Herzog form a national unity government? “That would present us with a complicated situation,” he said. “We would have to gauge the government’s temperature frequently and cautiously.”

Despite all the tension and preparations, one senior European diplomat serving in Israel doubts whether Europe has the ability or willingness to apply real pressure on Israel, even if a rejectionist government is formed. The diplomat told Al-Monitor on condition of anonymity, “Right now, Europe’s governments are bothered by the situation in Ukraine, so it is doubtful that they will take the time to create another active front, this one against Israel.”

According to him, “While it will be difficult to sell [Economy and Trade Minister Naftali] Bennett or [Foreign Minister Avigdor] Liberman as Israel’s defense minister, it is hard to imagine that the various governments in Europe’s capitals will be in any hurry to apply real pressure on Israel.” In the highest echelons of the European Foreign Ministry in Brussels, I even noted some degree of cynicism and mockery regarding the willingness of the various EU member states to use punitive measures to force Israel to make progress with the Palestinians. While discussing possible actions against Israel on a visit there in early February, I was told that “The EU member states aren’t particularly known for their courage regarding that matter. As a result, the center of gravity in any such effort to apply pressure will move [from the European capitals] to the form of joint action from the headquarters in Brussels.”

For his part, Netanyahu isn’t waiting for the day after the election and has already launched his own front against the European states. Netanyahu had long avoided interviews with the Israeli media, preferring the foreign press instead. Then he saw his decline in the polls and decided to embark on a marathon of interviews with almost all Israel's websites and television stations (except for Channel 10, which chose to forego the opportunity because the prime minister refused to be interviewed by its correspondent Raviv Drucker). In these interviews, Netanyahu played down his apocalyptic vision of what Iran might do to Israel. Instead, he warned listeners of the dangers of a “left-wing government” and accused the nations of Europe of trying to depose him by funding opposition groups to the tune of millions of dollars.

One senior EU source responded to Al-Monitor's query that these were just “outlandish assertions and ridiculous accusations. We have no idea what they are based on.”

Meanwhile, another Israeli diplomat described the mood in the capital where he serves as, "They are following [the election] with considerable interest, but mostly in silence, so as not to interfere."

Be that as it may, it seems that Netanyahu is right about one thing at least: Many people outside of Israel want to see the end of his term in office.