According to a sociology professor, extremist groups such as the Islamic State seek to return society to the early Middle Ages, when little to no art, science and culture existed. 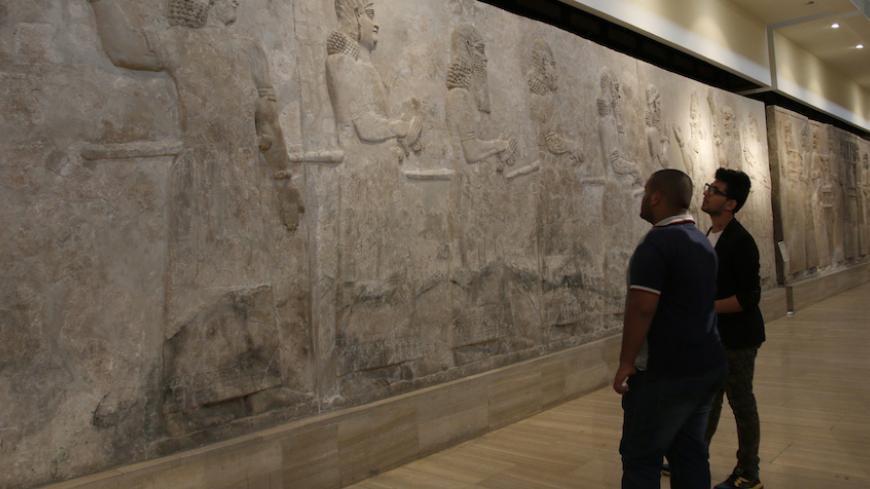 Visitors look at Assyrian mural sculptures from Khorsabad, at the Iraqi National Museum in Baghdad, March 8, 2015. Islamic State militants have desecrated another ancient Iraqi capital, the government said on March 11, 2015, razing parts of the 2,700-year-old city of Khorsabad. - REUTERS/Khalid al-Mousily

Painful images were circulated in the news in early February, showing Islamic State (IS) members burning close to 20,000 books in the area of Sadiyah in the province of Diyala. On Feb. 22, the terrorist group burned the public library in the city of Mosul.

The burning of libraries continued, reaching the cities of Anbar, Tikrit and others that fall under the group’s control. Local residents in the city of Mosul have said that their cities have become without books, after having been widely known for the abundance of their libraries. Rare manuscripts were among the burned documents, according to witnesses in the city.

Dia al-Jassani, a sociology professor at Baghdad University, said during a phone interview with Al-Monitor that the behavior of IS reflects an ideological and behavioral complex based on intimidation to control others. He noted that reinforcing ignorance is one of the elements of this ideological and behavioral complex, since the group ridicules other civilizations and cultures, and their symbols.

Through its antagonism of civilizations, IS seeks to revive ancient eras, and imitate as much as possible life during the period of early Islam in the 7th century, during which there were no arts and sciences, but only religious jurisprudence. The Islamic religion contains a lot of teachings that prohibit the modernization of religion, or the introduction of new elements to customary forms of worship, Any such addition is referred to as a "bid'ah," or heresy. The term carries a negative connotation in the religious sense, although it is derived from the Arabic word "ibda,” or creativity.

Extremist groups such as IS and al-Qaeda use the customs and traditions of the desert and distort them with religious connotations. As a result, these groups have prohibited anything new and innovative, not only in religion and worship, but in all areas of life. They are trying to return to life to the pre-innovation and modernization ages. Thus, they are burning all arts, literature and science books, and keeping specific genres of books, mainly those related to the Islamic faith. The extremist organization has destroyed theaters and ruins, eliminated heritage and prohibited the use of mobile phones, deeming these “heresies.” They also prohibited people from wearing modern clothes, and imposed dress worn in ancient times.

Jassani said that IS’ practices are based on opposing everything that is civilized, since its ideology is based on backwardness and seeks to return life to remote ages. He added that the group considers these ages to represent real life, and everything that followed is seen as forbidden innovation.

IS’ actions in Baghdad led the Iraqi and Arab media to liken the group to the Mongol invasions led by Hulagu in 1258, when invaders killed people and destroyed books and the city’s historical monuments — a landmark in the city’s history that continues to spark debates until today.

Arab historians say that back then, the waters of the Tigris River turned red, as a metaphor for the massive killings and bloodshed that took place. Some exaggerate in describing the amount of books that were thrown into the river, and thus claiming that the Tigris turned all blue. Although this could be an exaggerated incident that has yet to be confirmed, everyone agrees to the fact that a large number of Baghdad’s books and libraries were burned and thrown into the Tigris. Well-known historian Ibn Khaldun also agrees with this account of events.

For his part, Ibn Kathir, a prominent historian among Arabs, described in his book “The Beginning and the End” the events in Baghdad following the Mongol invasion in a heartrending manner.

“Baghdad has become dead on its feet and empty, except for the dead on the roads under the rain that changed their faces. The stench of death filled the air, and epidemics spread. When calm returned to Baghdad, people came out from their underground hidings like the walking dead. Some have denied one another, while the father did not recognize the son, and the brother did not recognize his brother,” Ibn Kathir wrote.

Jassani said that IS and the Mongols have common objectives. He stressed that the IS culture is consistent with that of the Mongols, despite the difference in ideology — IS being Islamic and extremist, and Mongols Buddhist and totemic. He added that all anti-civilization forces that advocate backwardness have similar behaviors, and adopt the approach of intimidation and reinforcing ignorance as a means of attaining their goals.