Civil society organizations and cultural institutions are rushing to supply two libraries in Mosul with books, publications and periodicals. 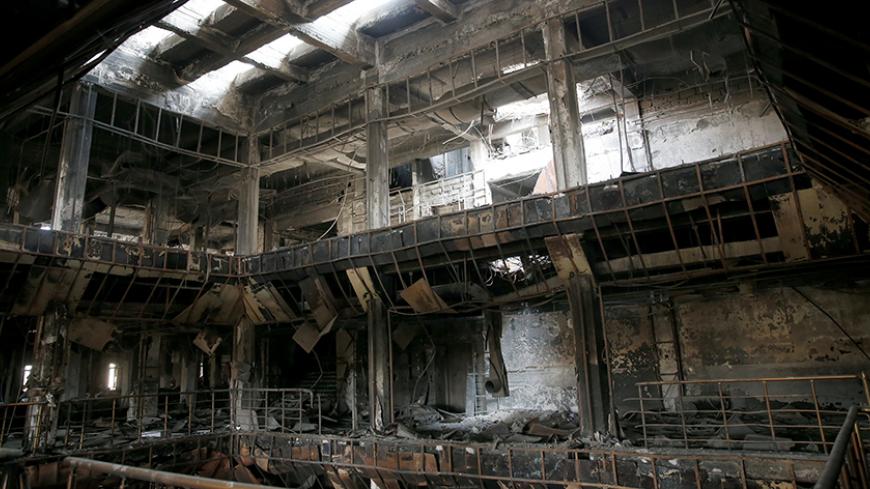 General view of the library of the University of Mosul, Mosul, Iraq, Jan. 31, 2017. - REUTERS/Ahmed Jadallah

BAGHDAD — Iraqi academics and civil society organizations in Iraq and abroad are implementing an initiative to rehabilitate the Mosul Public Library. The library was founded in 1921 and includes around 113,000 books. On Feb. 22, 2015, the Islamic State (IS) burned down the library, marking a great cultural catastrophe.

The initiative also aims to rehabilitate the University of Mosul’s Central Library, established in 1967, which remained in ruins during IS’ control. IS took control of Mosul in 2014.

On June 13, the students of the University of Mosul took their exams for the first time in three years after the Iraqi armed forces liberated the university on Jan. 14.

The association managed to “collect a large quantity of books and publications that are ready to be shipped to Iraq,” said Ahmed al-Rabie, a member of the association and an Iraqi academic residing in Australia.

Rabie told Al-Monitor, “The association was able to collect a large quantity of manuscripts, science and technology sources and books from a number of Australian and Iraqi universities, civil society organizations, academics and social figures.”

Rabie added, “But the project faces technical difficulties to expand the scope of the campaign, amid lack of support. There are also logistic problems, like [getting] Australia’s permits to ship [the books] and ensure their safe receipt at the Iraqi ports and delivery to Mosul, as well as covering the financial cost.”

To overcome these challenges, Rabie said, “we contacted the official parties in Australia, namely the Iraqi Embassy and cultural attache to help with the process.”

He added, “The restoration of the University of Mosul is not an easy task, and civil society organizations cannot bear the responsibility alone.” He called on Iraqi universities, associations and academic centers abroad and international centers for scientific research and academies to help in the reconstruction of the university.

He also called for “Iraqi cultural attaches around the world to cooperate and adopt efficiency and professionalism standards, while committing to the rehabilitation process of the university.”

It seems these initiatives are mainly aimed at donating books to the University of Mosul’s Central Library, while ignoring other issues, such as diversifying support and filling the financial and logistic gaps.

On Jan. 25, well-known religious clerics called on cultural institutions affiliated with them to supply the University of Mosul’s Central Library with books.

On Jan. 29, the University of Basra urged librarians and researchers to donate books to the two ravaged libraries of Mosul.

However, the Association of Iraqi Academics in Australia and New Zealand’s initiative is of particular importance, according to Iman Abdel Malak, the head of the Center for Humanitarian Dialogue in Lebanon.

Malak told Al-Monitor, “Academics abroad can communicate with universities and scientific and research bodies in various countries in a bid to collect periodic scientific publications, books and literary works, different than those already present in Iraq. These books are either old, not updated or mostly literary or religious.”

Malak believes the rehabilitation of the library “is an adequate response to the ideology of extremist groups that has resulted in destruction and arson.”

Haidar al-Aboudi, the spokesman for the Ministry of Higher Education, praised the “initiative of Iraqi academics in Australia and New Zealand.”

He told Al-Monitor, “The ministry welcomes any efforts in this regard and is ready to cooperate and coordinate [efforts] with local and foreign organizations.”

Aboudi added, “The ministry is considering the cost and the administrative measures required for such initiatives. It calls on contributing parties to contact the ministry through official channels to coordinate [efforts] for the shipment and for covering the cost of this process.”

Aboudi said, “The ministry is also contributing in the rehabilitation of the University of Mosul through a project aimed at equipping 130 laboratories and restoring 23 faculties.”

Shawan Daoudi, a member of parliament’s Cultural Committee, commented on the efforts to find support for the restoration of Mosul’s libraries and how to ensure the success of the initiatives of academics and civil society organizations abroad. He called for “establishing a clear and public government mechanism that allows the various parties inside the country and abroad to communicate and ensure the success of their initiatives by providing financial support.”

Daoudi told Al-Monitor, “Iraq has received 5,000 books from French organizations. … Civil, charity and cultural organizations abroad have very important and qualitative initiatives, but they face difficulties associated with the costs and [getting] the official Iraqi approvals.”

It seems several parties are eager to rehabilitate the cultural scene in Mosul. Riyad al-Gharib, a member of the Iraqi Writers Union’s executive office, told Al-Monitor, “The union has called on writers and intellectuals to actively participate in the formation of a movement tasked with collecting books and sending them to Mosul, as well as holding cultural and educational events in the city.”

What Mosul needs today is not individual initiatives from inside the country or abroad. What it actually needs is an official government mechanism that coordinates the work of the initiatives and supports them to form a collective national movement that rebuilds Mosul’s cultural institutions in a scientific and thoughtful manner.