Is Priest Who Inspired Video Worth All The Rage?

Nervana Mahmoud argues that a rational, mature, intellectual response — not blind anger — is the way to handle anti-Islam clerics like Zakaria Boutros, who's seen as an inspiration to those who made the infamous video. There's no silencing those who challenge Islam, but one can gracefully stand up to the challenge, she writes. 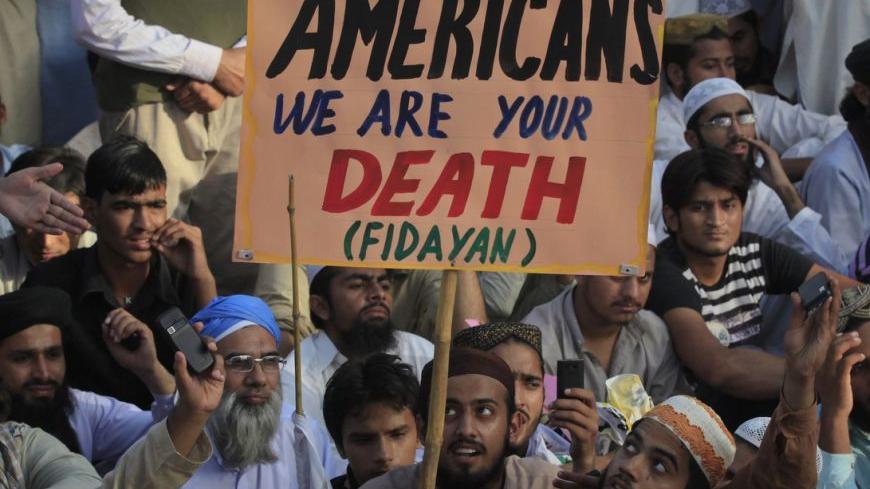 A supporter of the religious party Idara Sirat-e-Mustaqeem holds a placard during a rally with some 600 other protesters against an anti-Islam film made in the U.S. mocking Prophet Mohammad, in Lahore September 23, 2012. A Pakistani minister offered $100,000 on Saturday to anyone who kills the maker of an online video which insults Islam, as sporadic protests rumbled on across parts of the Muslim world. - REUTERS/Mohsin Raza
September 25, 2012

As more details have come out about the men behind the anti-Islam video that enraged parts of the Muslim world, it was disclosed that they are devotees of Zakaria Boutros, a fiery priest who for years has been on a mission to discredit Islam and its Prophet Muhammad.

What makes Boutros unique is his approach? The 77-year-old Egyptian did not just study Christian theology; he claims that has devoted his life to studying Islam, the Quran, Muhammad’s sayings and Islamic jurisprudence. He has researched both medieval and contemporary Islamic texts, and he has done this all with the aim of finding “alleged” inconsistencies and exposing what he believes to be a “fake” religion.

In view of the violence over Innocence of Muslims, I think it's crucial to shed some light on the man who's made a career of denigrating the Prophet of Islam. (It's also important to state there's no proof that Boutros is directly behind the anti-Islam video, and he has denied any ties to it.)

First, it's important to highlight that he doesn’t belong to the main Egyptian Coptic Orthodox church. The TV channel al-Hayat has stopped broadcasting his program since July 2010. He now has his own TV channel, Alfady. It's also worth mentioning that there are others (mainly work on Al Hayah channel) who preach Christianity in the Arab world and openly challenge the Islamic faith.

Second, Boutros' success mainly stems from the inability of many Muslims to openly ask questions about their religion. Reflection on faith is culturally discouraged, as it is believed to potentially lead to accusations of heresy. Scholars welcome daft, superficial questions, rather than challenging questions about contents of medieval texts. On the contrary, Boutros and his followers enjoy tackling those tricky questions to raise doubts among vulnerable Muslims.  Some of them convert to Christianity, while others chose to live as hypocrites rather than face the painful ordeal of conversion.

Third, Boutros relies extensively on some medieval Islamic books, such as Tafsir al Qurtubi, Umdat al Qari, Sunan-Al-Nisa'i, and the famous Sahih Bukhari. In fact, the story of the donkey that was revealed in the recent anti-Islam video is not new; Boutros discussed something similar in 2009, and claimed it's based on a story from an Islamic book called Ibn kathir's al-bidaya we al-Nihaya. These books are available, but they are not the easiest to read, and require great efforts and patience to understand.

Fourth, reformation (or the lack of it) of Islamic thought is at the core of the problem. Most Islamic scholars refrain from discussing controversial Islamic texts, yet, they are reluctant to omit them from mention. Their hypocritical yet defensive approach is counterproductive, as it allows the likes of Boutros to jump in and play with the hearts and minds of good Muslims. From following Boutros, I think he bases his anti-Islam theory on three basic elements:

• The Prophet’s alleged “sexual” habits: mainly the age of his wife, Aisha, who some say was 9 when she married Muhammad. Despite some several attempts from many, progressive Muslims to dispute the claim, some Salafi scholars try to exploit the story to lower the age of marriage in Muslim countries.

• Abrogation of Quranic verses (to annul or abolish certain verses of the Islamic holy book): this is a complicated topic that consistently stirs up a lot of debate. It also gives an opportunity to someone like Boutros to highlight possible controversies among different scholars over the essence and extent of abrogation. On many occasions, he highlighted how scholars drew a ruling from abrogated passages!

• The discrimination against those who leave the Islamic faith: Despite the fact that freedom from Islam is clearly stated in the Quran, most Muslim societies persecute those who desert the Islamic faith badly — many live under a state of constant threat for their entire lives. Their misery is highlighted (and often exploited by Boutros) to affirm his theory that Islam is an evil faith.

Though the toxic cocktail of fatwas, anger and violence is par for the course these days, it certainly will not deter Boutros and his ilk. There are unconfirmed reports estimating that 6 million Muslims convert to Christianity annually. Oppression may force them underground, but will not inspire a genuine return to the Islamic faith.

Instead, scholars should have a dual strategy: on one level, they need to switch from their current mode of denial to a more sensible approach that tackles the roots of the problem rather than moaning about its consequences. They should embark on much needed reforms of medieval texts that were clearly written on a non-scientific basis and with occasional unreliable references. On the other level, they need to understand that a rational, mature, intellectual response and not blind anger is the only successful way to handle people like Boutros. It is naive to assume that we can silent those who wish to challenge our religion, but we can gracefully stand up to the challenge.