Iran gathers power in Iraq as US further sidelined

Iran has succeeded in expanding its influence in Iraq by supporting the Shiite paramilitary forces there, a move that the United States has avoided since 2003. 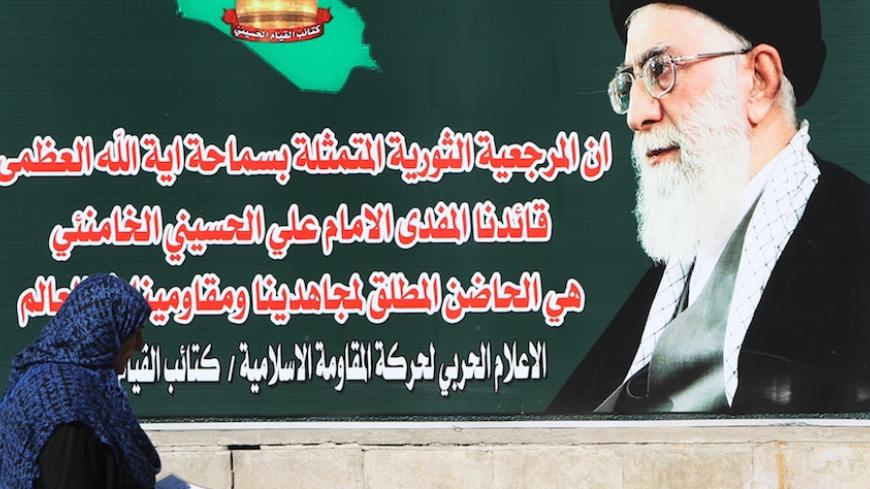 SULAIMANIYAH, Iraq — While the United States has invested trillions of dollars and thousands of lives since 2003 to bring Iraq into its orbit, today it is Iran that appears to have achieved that goal, albeit with far less costs in terms of money and lives, observers and analysts of Iraqi affairs agree.

There appears to be no better demonstration of Iran’s success in having firmly established its hegemony across Iraq than in the current operation to retake the Sunni-dominated province of Salahuddin in central Iraq. The operation to push out Islamic State (IS) militants from Tikrit and its surrounding areas in Salahuddin is being carried out by a ragtag force of Shiite Popular Mobilization Units, the Iraqi army and some local Sunni tribes.

The largest military campaign so far against IS, the Salahuddin operation has been noted for the heavy involvement of Iranian military advisers and the conspicuous absence of the US military. While the United States has in the past aided similar operations by the Iraqi military and Popular Mobilization Units in areas such as Amerli and Baiji, no US warplanes are now dropping bombs in Salahuddin.

“The Iranians have checkmated the Americans, and I think the Americans now understand this,” Hayder al-Khoei, an Iraq expert at the London-based Chatham House, told Al-Monitor. “What’s interesting about the Salahuddin operation is that the Iraqis and the Iranians are proving to Americans: We don't need your airstrikes.”

When IS swept large parts of northern and central Iraq in June, the jihadist group appeared unstoppable. During a forum last week in Sulaimaniyah, a city in Iraqi Kurdistan, Brett McGurk, US deputy assistant secretary of state for Iraq and Iran, admitted that a few days after IS’ onslaught in mid-June, his government's assessment was that Baghdad might fall within 72 hours.

“Iran proved, despite its difficult economic conditions, that it is prepared … and stood by us in any way it could to defend our country and our Islam and common beliefs, and by that I don’t mean the Shiite sect but the genuine human values that govern in this region,” said Hussein al-Shahristani, Iraq’s minister of higher education and a powerful Shiite politician, during the forum. “Iraqis will not forget this favor.”

Iraqi leaders say Iran has provided around $10 billion worth of weaponry to their forces. Iranian military advisers have also not been shy to advertise their role in the battle to retake the key city of Tikrit, the hometown of their former No. 1 enemy, former leader Saddam Hussein.

Gen. Qasem Soleimani, head of the Iran’s Islamic Revolutionary Guard Corps's (IRGC) elite Quds Force, has made no secret of his pivotal role on the front lines of Salahuddin. He is said to have been deeply involved in planning and executing the current battle.

Many of the major Shiite armed groups such as the Badr Brigades, Asaib Ahl al-Haq and Kataib Hezbollah are known to have been founded, trained and funded by the IRGC. It’s these forces that play the critical role in pushing back IS jihadists, according to media reports.

US military officials have expressed their concerns over Iran’s strong role in Salahuddin, fearing this could further alienate Sunni Arabs and Washington's efforts to get them onboard to fight against IS. Amid all this, many observers are asking whether the United States was even invited to join the Salahuddin campaign.

“The Iranians and their Iraqi proxies wanted to demonstrate their power and that they can fight in any battlefield, whether it is in the … mixed sectarian areas or in Sunni-only areas such as the Tigris River Valley [in Salahuddin],” Michael Knights, a fellow at the Washington Institute for Near East Policy specialized in the military affairs of Iraq and Iran, told Al-Monitor.

The US absence in the Salahuddin theater comes despite Washington’s attempts to coordinate the “liberation” of Sunni areas from IS. A date was even announced by Pentagon officials for an operation to retake Mosul from IS. But by conducting the Salahuddin operation, Shiite paramilitary groups and their Iranian backers sent a message of their own.

“[Iran and Shiite forces] are the most significant partners to the Iraqi state. They planned this operation to ensure they would get [to Tikrit] first, before the Americans,” Knights added. “It’s a big propaganda victory for the Popular Mobilization Units.”

Knights said that the operation was initially planned without Iraqi Prime Minister Haider al-Abadi's involvement. Official Iraqi army units were added only later, when Abadi got wind of the planning for the operation. Around 20,000 Shiite forces and 3,000 Iraqi soldiers are taking part in the Salahuddin assault, according to top US Gen. Martin Dempsey.

If the operation succeeds, most of the credit will go to Popular Mobilization Units' leaders such as Hadi al-Ameri and Abu Mahdi al-Muhandis and Quds Force Cmdr. Soleimani, Knights said.

The emergence of IS appears to have further consolidated Iranian clout in Iraq, as Iran's generals and sponsored militias have taken the lead in fighting off IS in areas the jihadist group seized from the Iraqi army last summer.

Even though many believe much of the US arms assistance for Iraq ends up in the hands of the pro-Iranian Shiite paramilitary groups, these forces make little secret of their disdain for the United States, often peddling conspiracies that the United States and other countries deliver military aid to IS.

While Iran has jockeyed for influence in Iraq since 2003, the withdrawal of US troops from Iraq in late 2011 paved the way for a stronger Iranian role in Iraq. The Syrian crisis next door brought Tehran and Baghdad even closer together as both sides shared an interest in saving President Bashar al-Assad’s regime and preventing the rise of a Sunni-dominated order there.

Now, as Iraq continues to slide even further into Iran’s hemisphere of influence, many in Washington are questioning US arms deliveries to Baghdad. Concerns about military aid to Iraq have been amplified due to gross human rights violations committed by Shiite Popular Mobilization Units and Iraqi troops.

Kenneth Pollack, an expert on Middle East politics and military affairs with the Washington-based Brookings Institution, believes the United States should continue a strong relationship with Baghdad.

“I think the Americans drawing back will be the worst thing to do. That will drive the government in Baghdad even more deeply into the arms of the Iranians,” Pollack told Al-Monitor. “If Iraq is going to move to a place where Iran has less influence, it’s going to take a long time.”