Ayatollah Hashemi Rafsanjani has said that Iran's hard-liners are in line with Israeli Prime Minister Benjamin Netanyahu in opposing a nuclear deal with the West, drawing the ire of one of Iran's most conservative newspapers. 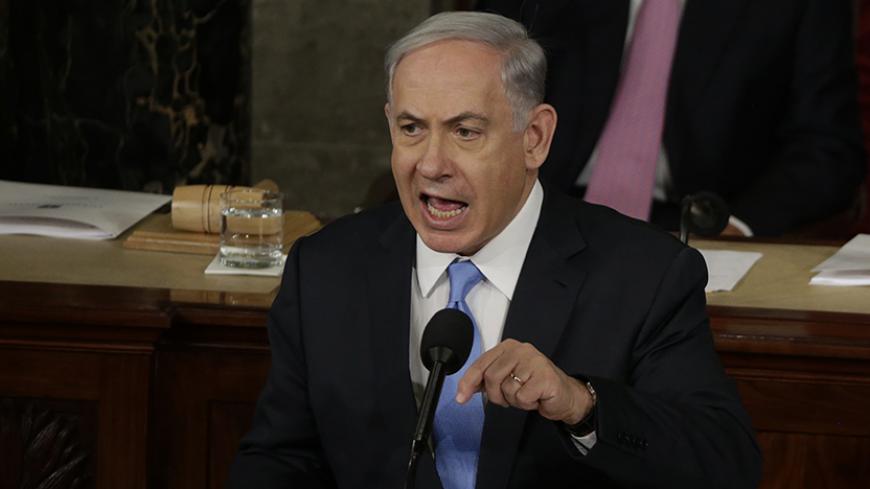 The March 3 speech by Israeli Prime Minister Benjamin Netanyahu in front of the US Congress warning against a nuclear deal with Iran and the circus-like atmosphere of the event's coverage has even sucked Iranian partisans into the debate. As the March 31 soft deadline for Iran's nuclear talks with the UN Security council approaches, Iranian political groups are taking their final shots at one another. Yesterday, the head of Iran’s Expediency Council, Ayatollah Hashemi Rafsanjani, took name-calling one step further by comparing Iran’s hard-liners and critics of a nuclear deal to the Israeli leader.

During an address at the Interior Ministry, Rafsanjani called the nuclear negotiations “the most important project for the administration” and reiterated that the “nuclear negotiation team is supported by the supreme leader.” He said that even the negotiators have repeatedly said that they are “pushing forward with the supreme leader’s plans” in the nuclear talks, “but I don’t know what happens to them that these ‘concerned’ parties are in harmony with Netanyahu.” “The concerned” is how critics of a prospective nuclear deal once referred themselves, and the name has caught on in the Iranian media and is used for hard-liners opposed to a deal.

In response to Netanyahu’s trip to the United States, drawing a parallel between different destructive behaviors, Rafsanjani said, “He went there to provoke [President Barack] Obama, and here the concerned say they will reveal secrets.”

Rafsanjani said that the comments made by some members of parliament against the negotiators are not constructive criticism but rather “destructive and spiteful,” and asked why they are silent when it comes to cases of economic corruption but take positions against an “issue that is for the protection of the country and world relations.”

Rafsanjani’s comparison between Iranian critics of a nuclear deal and an Israeli leader, particularly Netanyahu, who has made it his cause to rally the world against Iran, was no accident. An advocate of better relations with the world and especially with regional countries, his policies stand in deep contrast to those of many of Iran’s hard-liners. A number of Reformist media outlets, which generally support a nuclear deal with the West, ran the story on their front pages.

The hard-line Iranian media answered back. Vatan-e Emrooz, whose editor was an adviser to former President Mahmoud Ahmadinejad, responded in an article headlined, “Netanyahu in Washington, Hashemi in Tehran.” The article referred to Rafsanjani with the lower clerical rank of “hojat-al Islam” rather than “ayatollah,” and opined that Rafsanjani has invested his political career and reputation in President Hassan Rouhani and the nuclear negotiations.

The article claimed that the political futures of Rafsanjani and Rouhani are linked to the nuclear talks and the removal of sanctions. Iran’s nuclear achievements, it read, have “terrified”Israel and Netanyahu and the Geneva interim agreement, which Rafsanjani and Rouhani both support and has drastically reduced Iran’s nuclear program, has actually worked to the benefit of Israel.

Most importantly, the article framed Rafsanjani’s comments as either an order to begin attacks on the nuclear critics because they believe the nuclear talks will fail and they need someone to blame, or as saying that Iran is preparing to accept the strict nuclear terms set out by the United States.