The chairman of the House Foreign Affairs panel is lining up support for his bid to bypass Baghdad. 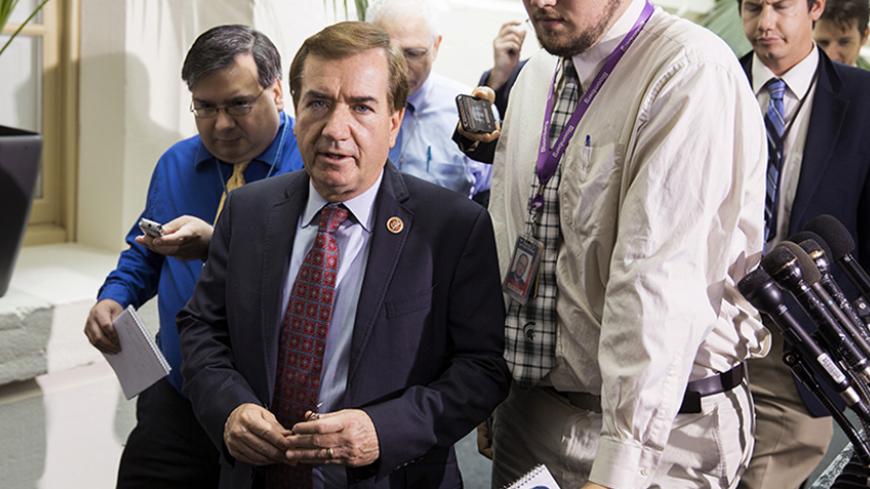 The top House Republican in charge of foreign policy is lining up allies in his bid to directly arm the Iraqi Kurds in their fight against the Islamic State (IS).

House Foreign Affairs Committee Chairman Ed Royce, R-Calif., is circulating a Dear Colleague letter asking colleagues of both parties to sign on to legislation that would allow the Obama administration to bypass Baghdad, Al-Monitor has learned. The pending legislation will largely mirror a bill that Royce filed late last year with ranking member Eliot Engel, D-N.Y.

"We invite you to help speed the flow of U.S. weapons to our Kurdish partners," the letter says, "by cosponsoring a bipartisan bill that would provide temporary authority for the President to provide military assistance directly to Kurdish 'Peshmerga' forces fighting ISIL [IS] in Iraq."

The push follows repeated requests by the Kurdistan Regional Government for heavy weapons, including helicopters, artillery and Humvees. The Kurds say they're not getting the equipment they need, while the State Department says its hands are tied because it must first get Baghdad, which has tense relations with Iraq's Kurdish region, to sign off before sending heavy equipment to Erbil.

"We've had a very extensive program to arm the Kurds," Assistant Secretary of State for the Near East Anne Patterson said at a House Foreign Affairs Committee hearing last week.

The Department of Defense "had a task force set up to provide small arms, medium-sized arms to the Kurds and to rush those in during the first stages of the campaign against [the Islamic State]," Patterson said. "I think at issue here is the heavy weaponry. Our analysis ... is that it would not be legal to provide those directly to the Kurds. And I understand members of the committee are considering legislation to redress that."

Official US policy remains to deal with Baghdad in order to prevent the country's fragmentation. A House aide familiar with the debate said Patterson and Secretary of State John Kerry were essentially goading Congress to change the law with such comments.

Royce hopes to pass the bill as stand-alone legislation since there's still plenty of time on the congressional calendar, according to congressional staffers. The measure would sunset after three years, once the Islamic State threat has been dealt with.

"It is in the U.S. interest to strengthen the military capability of the Iraqi Kurds by accelerating the delivery of the heavy weapons and armored vehicles needed to effectively fight ISIL [IS]," the letter says. "The U.S. thus far has provided limited 'resupply' of light weapons to Iraqi Kurds, but only after Baghdad signs off on every shipment. Meanwhile, U.S. plans to train and equip three new Kurdish brigades for counteroffensive operations are in their infancy."

According to the letter, the pending legislation: