Turkey has made tremendous progress in lowing child mortality, but poverty leaves Kurdish and Syrian refugee children vulnerable to physical and sexual abuse. 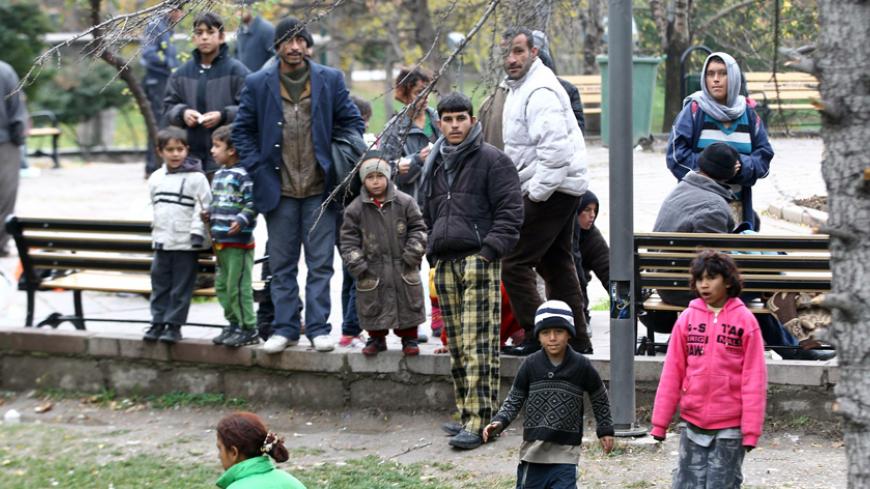 Syrian refugees who live in the streets stand in a public garden in central Ankara, Nov. 23, 2014.

On Jan. 21, at a Burger King in Istanbul's Sirinevler district, an 11-year-old boy named Halil was brutally beaten by the manager of the franchise. A photo of the boy with blood dripping from his face immediately began trending on Turkish social media. Halil is a Syrian refugee. It has become common that groups of three or four refugee kids wait in front of fast food franchises, and as customers leave, some of them give their leftover food to the children or leave their trays with the food and drinks on a table and tell the kids to help themselves. Video of the incident shows that Halil and a few of his friends had run into the restaurant to eat some leftover french fries, and the manager saw them. The manager beat them in front of several customers. One woman in the video becomes visibly upset and challenges the manager. Facing a public uproar, Burger King fired the employee.

Opposition media initially reported the incident under headlines proclaiming that the owner of the franchise is a member of the Justice and Development Party (AKP). This detail did not matter much, however, as pro-AKP media also condemned the child's beating. People from all walks of life commented on social media and on television news broadcasts that it was unacceptable. The reverberating case of Halil in a way became a moment that unified Turkey's divided society. Abdurrahim Boynukalin, president of the AKP’s youth branch, visited Halil’s family and told reporters that he and his siblings will receive assistance to attend school.

The image of Halil bleeding and the sound of his trembling voice saying, “I had gone hungry all day,” touched the hearts of everyone in Turkey. The video shows that Halil never managed to eat the french fries, and there were other hungry kids with him. The others did not make the news.

Cruelty and abuse of minors are, sadly, not exceptional occurrences in Turkey. In the southeast in particular, deaths of Kurdish children have been regular news items for decades. Since Dec. 15, four children have been victims of alleged police brutality in the small town of Cizre, in the border region. The latest incident involves the case of a 12-year-old, Nihat Kazanhan, who was shot and killed Jan. 14. The video of the incident was publicly released and a police officer arrested. The video shows a group of kids throwing stones at the police and the police retaliating by firing tear gas and live ammunition from their armored vehicles. In a surprising announcement, the Interior Ministry accepted that the security forces might be at fault for the incident.

Nurcan Baysal, a prominent journalist in Diyarbakir, told Al Monitor, “I regard these deaths of minors as murder by the state. Gas canisters and real bullets were used. These are not just mere accidents but rather targeted killings. It is such routine procedure all around this region [Kurdish towns in the southeast], even we cannot keep track of the number of deaths anymore. We cannot assume these deaths are due to security forces being provoked. We all know who is committing these atrocities.”

Baysal further commented, “These kids are growing up experiencing and observing violence in their daily lives. They know what chemical weapons do. They can tell you the town their families had to leave behind in the 1990s, even though they had not yet been born in those days. They grow up with the stories, and they still search for their missing relatives’ remains, bones. These atrocities are carried out by state forces, be it police or soldiers. If one of these officials who committed a murder had been taken to court, it could have stopped the killings. But the government did not do that. So, they gave a blank check to the security forces that it is all right to murder children.”

In May 2014, Al-Monitor reported on a spate of child murders and abuses that took place in the first four months of that year in Turkey. The main opposition Republican People’s Party (CHP) has introduced the issue of unresolved deaths of children to the parliament. Umut Oran, an outspoken CHP deputy and vice president of the Socialist International, told Al Monitor,

During the AKP government (2002-2015), 95 minors have been killed during public events. Whatever the setting, the responsibility for these kids’ lives is with the government. There are several allegations that we fear are covered up. When news of institutional torture broke at Izmir’s Aliaga Sakran Juvenile Correction Facility, it was the children again who got punished rather than the guards. Leaving everything aside, if you want to understand the value of children, look at the number of pediatricians in the most advanced Turkish city, Istanbul. It is a scary figure, especially when you have political leaders encouraging a population boom. Twenty-nine million people in Turkey live below the poverty line, and the minimum wage per month is less than $500 (949 Turkish liras). Even child labor laws are not enforced. Young children are employed without any regulations or records. When we sought an answer from the Ministry [of Labor and Social Security] about the working conditions of kids in the farming industry, they told us that in 32 cities, only 18 auditors were employed.

Several CHP deputies have been vigilant about the deaths of minors in Kurdish regions, an issue that predates the AKP government. Baysal asked, “Why do we still have so many dead and wounded children if there is a peace process?” Baysal emphasized that children’s deaths now make the headlines more frequently because of social media and that internally displaced Kurdish kids are dying in western Turkey as well.

Indeed, Turkey is a country of contradictions. For example, a look at the infant mortality rate — an important criteria for assessing development levels of a country — shows a remarkable decrease in infant mortality rates since the 1990s. Progress was particularly noticeable after 2003. In fact, UNICEF’s 2010 report on child mortality compliments the decrease in Turkey for being one of the highest. The AKP government deserves credit for its efforts in implementing effective vaccination campaigns, social services as well as better access to health care facilities.

That said, the UNICEF report and other analyses also note that infant mortality rates in Turkey are still high compared with other countries, such as Chile or Argentina, with similar levels of economic development. One would expect the rates in Turkey to be in line with its current economic indicators and therefore much lower. The answer to why this is not the case can be found by carefully examining the data. The UNICEF report cited increased infant mortality rates in the eastern and particularly southeastern provinces.

​Baysal explained to Al-Monitor that the child mortality rate in the Kurdish provinces is about 30% higher than in other parts of the country. These are areas where female literacy levels are the lowest, and pedophilia and chronic poverty are the highest.

A quick look at government or civilian violence against children, whether it results in death or mental or physical harm, reveals a perplexing picture in Turkey. On the one hand, people are genuinely upset about the suffering of minors, but on the other it is an accepted fact that poor and neglected children will suffer abuse. The majority of these kids are Kurds and Syrian refugees. Social services to heal and protect children are in need of comprehensive and urgent reform to deal with the undeniable reality of everyday life in most cosmopolitan Turkish cities.