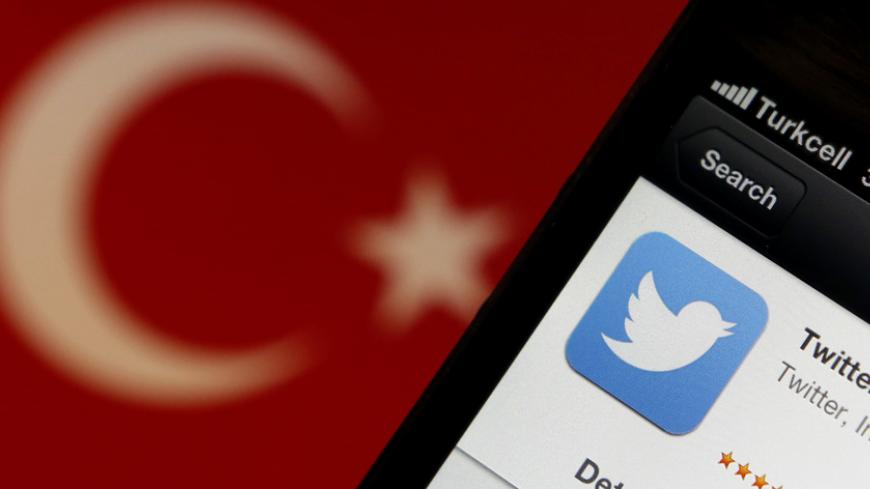 A Twitter logo on an iPhone display is pictured next to a Turkish flag in this photo illustration taken in Istanbul, March 21, 2014. - REUTERS/Murad Sezer

In March 2014, two Turkish academics — Kerem Altiparmak and Yaman Akdeniz — led the legal fight at the Constitutional Court that secured the lifting of Ankara’s ban on Twitter. Less than a year on, the pair’s quest against Internet censorship has taken a new turn. They are now mulling legal action against Twitter itself, in the United States, as the company draws mounting criticism for collaborating with Ankara’s censorship machine.

Twitter’s own statistics illustrate how its compliance with Turkish restrictions has increased at a time when Ankara faces growing international condemnation for gagging free speech. According to the company’s transparency report for the second half of 2014, released Feb. 9, Turkey topped the list of countries seeking content removal, sending Twitter a total of 477 court rulings and government agency requests, an increase of more than 150% from the first half of the year and five times more than the runner-up, Russia. Twitter withheld content in relation to 50% of Turkish demands, up from 30% in the first half of 2014 and 0% in 2013. Overall, 62 of the 85 accounts and 1,820 of the 1,982 tweets Twitter withheld were from Turkey.

For free speech activists, Twitter’s growing compliance is a cause for serious alarm. Social media and Twitter in particular are among the few public realms in Turkey today where the government has failed to suppress criticism and information exposing dirty linen — from graft and in-house feuds to secret arms shipments to Syria. The onslaught on the Internet has intensified since December 2013, when a massive corruption investigation rattled the ruling party ahead of local polls. Twitter became a channel for scathing leaks from the probe, and ended up being banned for two weeks.

On Jan. 20, Altiparmak and Akdeniz, both scholars of the law, sent a legal notice to Twitter, urging the company to stop its blocking practices, which, they said, had become a means of stifling free speech in Turkey. Among other arguments, they stressed that “Twitter carries the characteristics of a public forum protected by the First Amendment to the United States Constitution and there is no alternative platform to it in Turkey.” If Twitter fails to change its attitude, “we will take all possible forms of legal action in both Turkey and the United States,” they warned.

In an email interview with Al-Monitor, Altiparmak, who teaches at Ankara University, indicated he and his colleague from Istanbul’s Bilgi University were determined to follow up on their warning. “Twitter’s transparency report confirms the points we raised in the legal notice. … Twitter appears to have become the tool of a big censorship machine,” he said. “We didn’t send the notice to warn them only. We continue working on it, but we need a bit more time to decide how we take action.”

A request for comment to Twitter remained unanswered as of Feb. 18. But Jeremy Kessel, senior manager for global legal policy, said on Twitter’s blog last week it had appealed most court orders from Turkey in the second half of 2014, but with little success. He wrote, “We filed court objections in response to over 70 percent of the Turkish court orders we received, winning ~5 percent of our appeals, losing ~80 percent, and having ~15 percent still pending with the courts (note: we have never used country withheld content in Turkey without receiving a court order first).”

The very court orders, however, have grown increasingly controversial, fueling indignation with Twitter for heeding them.

“Twitter is cutting corners. They are basically telling the government, ‘Give us an official decision and we’ll implement it, no matter what it is.’ This is unacceptable, for all those decisions are arbitrary and flout freedom of expression,” Altiparmak said.

In one landmark case, Celil Sagir, an editor at the English-language Today’s Zaman and a vocal corruption critic, has had three accounts blocked since September over complaints by President Recep Tayyip Erdogan, his family members and an adviser.

“The first complaint sought the banning not only of my existing account but all future accounts I might open. Mind-blowing! The judge showed mercy and ordered a ban only on the existing account,” Sagir told Al-Monitor.

Erdogan and his co-plaintiffs “could have sued me for defamation, but they didn’t. They simply wanted to silence me. This has become very easy with the criminal judgeships of the peace,” Sagir said. “In a country where people are increasingly muffled by censorship, social media and especially Twitter provide a lifeline. We expect Twitter to take a stand in favor of free speech rather than collaborating with sham courts and an authoritarian government.”

In another striking case, a criminal judge of the peace secured a ruling last month for the removal of about 300 tweets, posted by journalists and media outlets among others, on the grounds that they infringed with his personal rights. Let alone any insult or criticism, many of the posts contained only a reference to a newspaper report about a ruling the judge had made in a controversial wiretapping case.

Efe Kerem Sozeri, a Turkish academic at VU University Amsterdam who monitors and tallies the censorship cases, sees a trend of “wholesale censorship” whereby government members and cronies seem to simply search their names on Twitter and file complaints against the entire list of “negative” posts the searches turn up. “Even university professors, unable to tolerate criticism from students, have come to apply to the criminal judges of the peace,'” he said.

Sozeri believes Twitter chose to “bow down” to Ankara after last year’s ban, keen to avoid future bans and therefore commercial losses in a country of some 12 million users. “The company had and still has no other option, if it’s to take a share from Turkey’s growing advertising cake,” he said.

Could legal action against Twitter in the US bear fruit? Altiparmak concedes the issue is a complex one that raises two legal problems: the applicability of human rights norms when the violator is not a state but a private entity, and the prosecution of human rights violations committed in another country. “There are various precedents and arguments on both issues. … We are trying something new since the problem itself is new and, as the transparency report clearly shows, has a crucial impact on Turkey in particular. We are trying to build a strategy combining all those aspects,” he said.

Twitter’s compliance policy is likely to stir more outcry in the coming days as Ankara plans fresh restrictions on the Internet ahead of general elections in June. A bill that expands immensely the grounds for blocking online content — from “protecting national security and public order” to “preventing the commitment of crime” — is currently on parliament’s agenda, evoking Erdogan’s memorable threat to “root out all that Twitter-schmitter — all of them.”