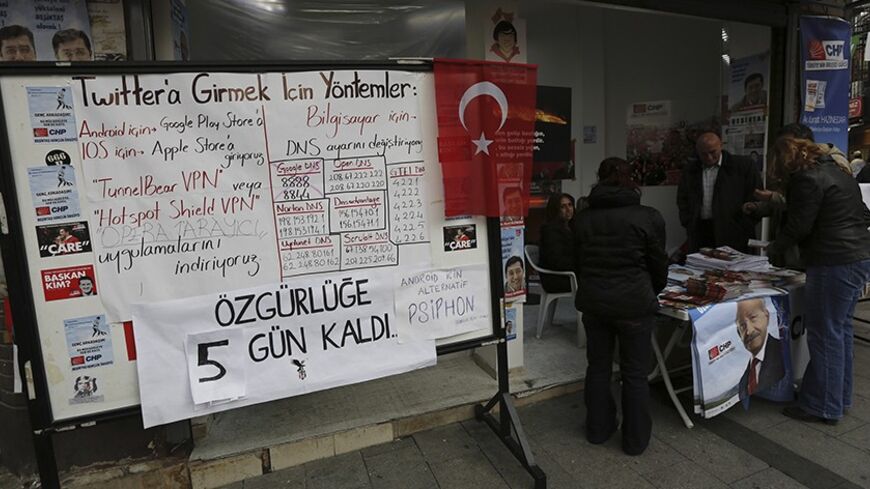 A board showing the alternative ways to access Twitter, is placed at an election campaign office of the main opposition Republican People's Party (CHP) in Istanbul, March 25, 2014. - REUTERS/Murad Sezer

Turkey’s ban on Twitter has become a major topic in the international media. The government insists the ban is not a political decision, but the result of a court ruling. No matter what the reason is, blocking access to Twitter is unacceptable in terms of basic rights and freedoms. The Justice and Development Party (AKP) government will no doubt pay a price.

Moreover, enforcing the ban is technically impossible. Turks have continued to use Twitter despite the ban, using alternative DNS settings. AKP ministers and parliament members continue to tweet as well. So, banning Twitter is not only wrong and absurd, but practically impossible. This nonsensical situation will come to an end within several days.

I discussed the ban in detail with Prime Minister Recep Tayyip Erdogan’s advisers, conveying to them the views I explained above. The arguments the advisers made to me can be summarized as:

In the meantime, Yalcin Akdogan — a well-known and outspoken adviser to the prime minister — is irked also by the European Union’s statement on the issue.

Here is what Akdogan said: “The European Union should have been more cautious in its statement on Twitter. It should have taken into account the obvious court rulings and aggression against personal rights. Doesn’t the European Union care about personal rights and court rulings? Failing to recognize this aspect of the matter while publicizing the prevention measure as a ban, presenting it as a permanent shutdown of Twitter, is an erroneous stance.

“We have here issues taken to court via citizens’ complaints and subsequent court rulings relayed to Twitter. Pornographic content has been posted from a fake account using the name of one lady. This is a direct aggression against personal rights. The person in question had taken the issue to the court and got a ruling, but Twitter failed to implement the court ruling. There are other similar rulings that pertain directly to personal rights and have nothing to do with the government or political matters. Twitter has failed to implement those court rulings, [flouting] the rights and freedoms of those people. As a result, a preventive measure was applied. And since tweets cannot be blocked on an individual basis, the whole system is being blocked.

“Facebook removes objectionable content when it receives court rulings, but Twitter does not. This amounts to saying, ‘I don’t recognize neither the Republic of Turkey nor its laws nor any personal rights and freedoms.’ They are being a bully. And no one can be a bully vis-a-vis personal rights, the Turkish state and its laws. They will have to take seriously the Turkish state’s laws, just as they take seriously the laws of the United States, Britain and other countries and reach compromises with them.”

So, that’s how Erdogan’s inner circle sees the Twitter ban. The government is right about Twitter’s indifference, but in my opinion, sending out the image of a Turkey on a par with Russia and China does no good for the country. There is no reason justifying the blocking of Twitter. Enforcing the ban has made it hard for Turkey to explain its just reasons to the international community. Turkey is not a country that deserves such a distorted image abroad.