New Turkish legislation on the Internet stands in stark contrast with the democratic norms of the European Union. 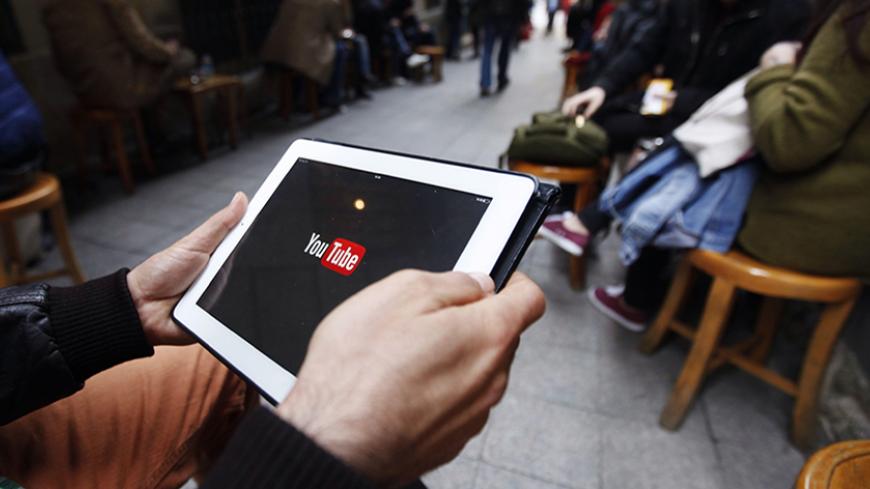 A man tries to get connected to YouTube with his tablet at a cafe in Istanbul, March 27, 2014. - REUTERS/Osman Orsal

The Turkish state has equipped itself with even more authority to monitor its Internet users, contradicting its new government's re-energized EU drive in a potential blow to democratic rights of free speech and privacy.

Just a week before the Turkish government announced its new “EU strategy,” which was featured prominently in its program, parliament approved a government-sponsored omnibus bill on Sept. 9.

The bill, quickly signed into law by President Recep Tayyip Erdogan, has two articles regarding Internet data rendition that made a huge change with a few touches to the existing legislation.

The older version of the law had stipulated that Turkey’s Telecommunications Directorate (TIB) must apply to a court within 24 hours and must receive a judiciary approval in 48 hours after blocking a website with an executive order.

TIB, effectively controlled by the government, was also restricted in the collection of Internet traffic data to pinpoint certain users. According to the same law, it could request this information from Internet service providers (ISPs) only by referring to a court order or criminal investigation.

The updated law changed it all. Article 126 of the omnibus bill states that the TIB, not ISPs, will store the traffic data. Moreover, it will need a court order only when it will send particular data to a public institution that requests it.

Article 127, on the other hand, extends the TIB's authority even further. “To protect national security and public order, as well as to prevent crime" is added in the legislation as another reason for the head of TIB to order the blocking of a website. Furthermore, the article decreases the maximum time allotted to ISPs to abide by the TIB's blocking order to a mere four hours.

The TIB didn't respond to my request for a comment, but its current infrastructure to store the whole traffic data of Turkey for two years was thought to be adequate and ISPs were happy to leave to burden of hosting and processing such large files to the state, which would cut their costs. "We're abiding by all regulations," said Zeynel Caglar, media relations manager of TTNET, Turkey's largest ISP.

If the TIB is to store the whole data on the Turkish Internet, it would need gigantic data centers that can compete with Google's and Amazon's. "But they'll just store the IP addresses and match them with the traffic data. For such an operation, a room full of servers would be enough," a cloud computing expert from one of Turkey's leading ISPs told me.

In short, the latest amendments mean that the government is now "legally" holding a vast database about all Internet users in Turkey, including which websites they visit when and for how long, with even more executive power that can be wielded like a shot, perhaps arbitrarily, and definitely with less judicial review.

"The new regulation violates both Turkey's Constitution and the European Convention on Human Rights, because it is a categorical limitation to control the Internet. Many fundamental rights, including the rights to be informed, free speech and privacy, will be negatively affected by this regulation," said Burak Gemalmaz, a human rights expert from Istanbul University.

The main opposition Republican People's Party (CHP) applied to the Constitutional Court on Sept. 15 for the annulment of the new regulation. The top court, which has recently become a beacon of light for the rule of law and democracy in Turkey with its liberal rulings, may indeed overturn the law, but the real problem about the conduct of the ruling Justice and Development Party (AKP) goes well beyond specific articles.

Ahmet Davutoglu, former foreign minister, started his term as prime minister earlier this month, following Erdogan's ascension to the presidency. Davutoglu's government program ambitiously mentions Turkey's EU membership as a "strategic goal," vowing to achieve it by 2023, the 100th anniversary of the foundation of the republic.

"Turkey will continue its political reform process again, as intensely as it has been in the past," Volkan Bozkir said Sept. 17 during his first visit to Strasbourg as Turkey's EU minister.

These statements are all good news, but the problem lies in the bitter fact that the new government's rhetoric does not square with its current practice. Even before the latest amendments, the Turkish legislation related to the Internet stood in stark contrast with the democratic norms of the EU.

As a matter of fact, no democratic state in the world resorts to such nontransparent and unchecked measures in data retention. Even enforcing ISPs to keep the data for a long time is deemed undemocratic by many observers.

An EU Directive requiring member states to ensure that ISPs retain the necessary data for up to two years was declared invalid by the European Court of Justice in April. Even in the United States, where most concerns originated from clandestine intelligence activities, all attempts to create mandatory retention legislation for ISPs has failed so far.

Turkish authorities try to justify the latest draconian measures with what they call a “coup attempt” led by Fethullah Gulen, their ally-turned-nemesis, who allegedly targeted the government with the corruption probes that were initiated by his followers in bureaucracy. In fact, the probes and their aftermath beefed up much-speculated suspicions, not only of corruption, but also of massive wiretapping by Gulenists.

Still, one should remember that the government's eagerness to control the Internet dates back to old times when Gulenists were still their allies. The main body of the current problematic legislation, for instance, was enacted in May 2007 on the grounds that the state has a duty "to protect its citizens from obscenity and to provide privacy."

The government's initial plan earlier this year was to give the transport minister the same authority as the head of the TIB in blocking websites, and the EU had voiced its "serious concerns." Then, months before he left office in August, President Abdullah Gul successfully intervened to prevent the executive branch from collecting all traffic data by itself.

As long as Turkey drifts away from the EU path while singing songs of democracy, I'll keep wondering whether it will block Wikipedia and prosecute its voluntary editors as coup-plotters one day.

After all, its Culture and Tourism Minister Omer Celik on Sept. 14 slammed the free encyclopedia for conducting an "operation" against Turkey with its article titled "Authoritarianism."