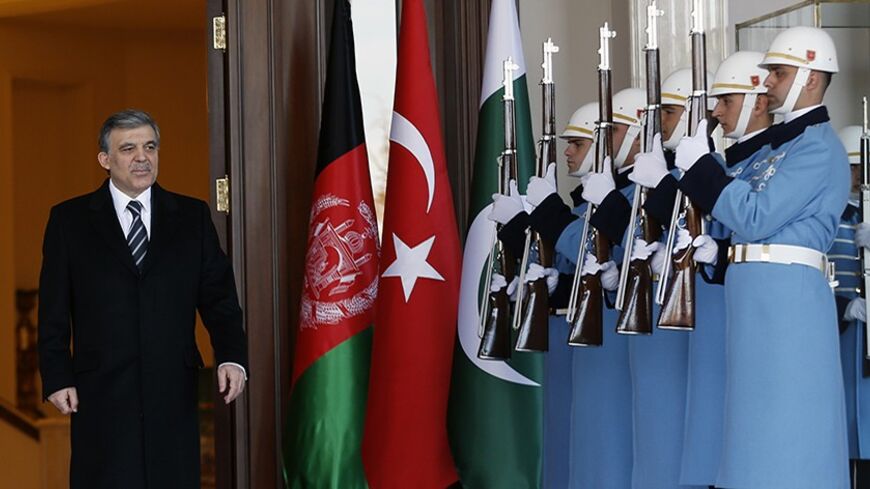 Turkish President Abdullah Gul waits for his guests at the Turkey-Afghanistan-Pakistan Trilateral Summit at the Presidential Palace in Ankara, Feb. 13, 2014. - REUTERS/Umit Bektas

On Feb.18, Turkish President Abdullah Gul signed the controversial Internet legislation in full compliance with his record of total alignment with the ruling Justice and Development Party (AKP), of which he is a founding member. This is yet another good example of how the country is left without a working checks-and-balances system. It is a disservice to democracy, to say the least, when members of the same party control the presidency and the parliament.

While many Turkish analysts had seen a good cop-bad cop scenario in their analysis of the newly chilled relationship between Gul and Turkish Prime Minister Recep Tayyip Erdogan, particularly over their differences in approaching the Syrian crisis, it is no surprise that Gul and Erdogan are both on the same boat when it comes to prioritizing their own political futures, rather than putting the nation first and respecting freedoms and democracy.

The Freedom House warned on Feb.11, “If President Abdullah Gul signs the restrictive Internet bill adopted by the parliament last week, he will take the country into uncharted territory.” The report made clear that as much as Turkey’s democracy may not be perfect, this new legislation would even further problematize it. “In September 2014, Istanbul will host the ninth annual meeting of the Internet Governance Forum, for which human rights, freedom of expression and the free flow of information on the Internet are key concerns. As host, Turkey must set an example of basic compliance with these norms. It will be patently unable to do so if President Gul signs the Internet legislation currently before him.”

After signing the bill as is, Gul said the government promised to make changes to the problematic aspects of this legislation. “To give the opportunity for these amendments to be made rapidly, I approved the law in front of me as soon as I returned from Hungary,” Gul wrote Feb. 18 on his Twitter account. Since then, more than 100,000 people have unfollowed him on Twitter. And today’s trending Twitter hashtag in Turkey is #GULSeniBendeBiraktim, meaning Gul I Also Left You Behind.

Communications Minister Lutfi Elvan said on Feb. 18 that the government was going to present the amendment to this new legislation after the president ratified it. Yet, if there is agreement between the president and the government that this legislation needs to be amended, then what is the hurry? By law, Gul has the right to return any proposed legislation to the parliament for revision.

If he had done so, the government then has two options. It can either make these changes or not before sending it back to the president. Each time new legislation comes to the president, he has 15 days to decide. The president also has the right to appeal new legislation to the Constitutional Court. In 2004, for example, then-Turkish President Ahmet Necdet Sezer vetoed AKP’s public administration legislation, warning that those changes in law were in conflict with the constitution and raised doubt over changing the country’s unilateral system into a federal one. The Erdogan government did not send it back to Sezer ever again, with the assumption that he would appeal it to the Constitutional Court. It is, however, considered mostly the duty of the main opposition party to take such controversial legislation to the Constitutional Court. They have 60 days to appeal after the legislation is published in the Official Gazette, which marks the day when this new law becomes effective.

This new Internet legislation, which was presented to the parliament only after the corruption and bribery probe became public on Dec.17, would allow the authorities to “block individual URLs without judicial review. It also obliges Internet service providers (ISPs) to store users’ personal Internet data for up to two years, and creates a single association of ISPs.”

Ordinary Turks in the streets in opposition to the Erdogan government's policies consider this new law a direct rebuke of their constitutional right to have access to information, and an attempt by the Erdogan government to prevent the free flow of information, specifically regarding the graft probe that is going to hurt the party. That is why many Turks doubt the ulterior motives of the Erdogan government over the timing of this legislation — although they could also benefit from the authorities' speedy intervention in blocking certain sites, where people at times come across unpleasant experiences, where their privacy is invaded or worse. Life isn’t always about politics, and the legislation should foremost protect and preserve the best interests of the people.

Yet many in Ankara’s beltway speculate about the coming elections in Turkey — specifically the presidential election in June, the first by public vote, and then general elections scheduled for 2015, but likely to be held this year. The tale is that the AKP has already become a distressed entity, where the party members quietly question Erdogan’s ability to govern the country with his well-known angry narrative, and that Gul can keep the party in power with new energy.

Erdogan, however, still has to decide what he is going to do — meaning he needs to decide whether he wants the presidency or to continue as prime minister.

The Turkish constituency has a special affection for Erdogan — not Gul. The prime minister is still the only one in this country who has the ability to shape the political arena, and he does not look like he can be defeated at the ballot box — yet. And Gul has proven once again with the signing of this controversial Internet legislation that he does not have the ability to stand against Erdogan, even at a time like this and after publicly admitting that this Internet legislation has some worrisome aspects.

However, AKP insiders speaking to Al-Monitor stress that the Erdogan government started to go awry since Gul became the president, because there is no one left in the party to object to Erdogan when needed. And that sounds like a more realistic analysis of the recent chilled relationship between Gul and Erdogan — instead of showing Gul as an alternative to replace Erdogan as the head of the party.

In a nutshell, this new Internet law is nothing but cybercensorship approved by the country’s two top leaders.