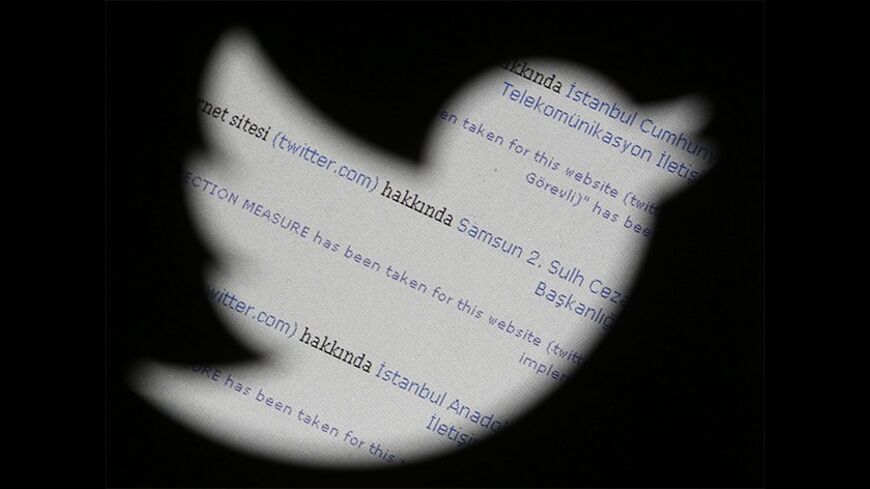 Turkish Twitter error messages are seen through a Twitter logo in this photo illustration taken in Zenica, March 21, 2014. - REUTERS/Dado Ruvic

At midnight March 20, Turkey blocked access to Twitter. The ban came just hours after Turkish Prime Minister Recep Tayyip Erdogan said at a rally in Bursa: “There is now a court order. We will root out Twitter. The international community can say this, can say that. I don’t care at all. Everyone will see how powerful the Republic of Turkey is.”

Turkey’s Telecommunications Directorate (TIB) based its decision on four separate court orders. One is out of Samsun, a Black Sea port on Turkey's northern coast. The court decided on March 4 to restrict access to the Twitter account of a woman, whose name is kept confidential. She complained that an unknown individual or individuals took control of her Twitter account and uploaded vulgar pictures, which tarnished her reputation and caused irreparable psychological damage. Speaking to the Turkish media, her lawyer Adnan Aydin stressed at no time he asked the court to implement a full Twitter ban, but just wanted it to take action to protect his client's privacy.

Former Minister of Transportation, Maritime Affairs and Communication Binali Yildirim, a member of the ruling Justice and Development Party (AKP), and his son Erkan Yildirim filed the other two court cases. They complained about two Twitter accounts: Hirsiza Oyyok (meaning, no vote to a thief) and Hirsizaoyyok.wordpress.com. There is no court decision on these two cases yet.

The fourth court case has not been verified, but it is decided by the court looking into the cases of crimes related to terror activities. “This decision taken by the anti-terror court has no value, because this court has just recently been nullified. The government passed a new law on that. Therefore, the prosecutor of this court can only share the files at hand as evidence with other courthouses, but they certainly have no authority to decide on anything whatsoever. If they do, theirs is no different than our bakery, pharmacy and grocery store deciding in a court case. For those of us working in the legal system, this decision should create that kind of a chilling effect,” Metin Feyzioglu, head of Turkey’s Bar Association, told Al-Monitor.

While laying out these facts to make the point that there is no valid court order to justify the government’s arbitrary decision to ban Twitter access from Turkey, Feyzioglu added: “The European Court of Human Rights (ECHR) decided on the case of Yildirim versus Turkey on Dec. 18, 2012. It was a similar case, and the ECHR found Turkey in violation of basic human rights. It decided that the domestic law does not provide for any safeguards to ensure that a blocking order in respect of a specific site is not used as a means of blocking access in general. Being fully aware of this decision, the Turkish government insists violating these basic rights. This can not be acceptable.”

Speaking to Al-Monitor, Riza Turmen, a former ECHR judge and a member of the main opposition Republican People’s Party (CHP) agreed. “The ECHR’s decision, however, was before the new controversial Internet law was approved. The court asked Turkey to correct its failures that restrict freedom of speech. Turkey did, but for the worse. With the new Internet law, there is now no need to have a court order to stop access to a Web page. But what happened yesterday was even in violation of this new law, as they blocked access to Twitter in general.” Turmen also said this is the first time that this Internet law is implemented: “Remember, they argued that this Internet law would not restrict anyone’s freedom. Well, look at the result. It certainly does not look like it advanced anyone’s freedom.”

Erdogan argued on Feb. 17 — the day this new law went into effect — that this new Internet law will not lead to censorship and the restriction of freedom. “We will make arrangements without limiting and restricting freedom, but also without bowing to threats and without ignoring the dangers [of the Internet].” Turkish President Abdullah Gul ratified the law despite expressing concern that it contradicts the constitution, and that he received guarantees from the government that they will correct those worrying elements.

Mustafa Unal, an Ankara-based lawyer, also stressed that this is more of a political decision to prevent further leaked tape recordings ahead of the March 30 local elections. Since the Erdogan government became the subject of a graft probe in December 2013, there has been a continuous stream of leaked audio recordings that place the government in a criminal spotlight. “We live in a digital world. It is not possible to totally ban people from having access to any site. That can only be done by shutting the Internet down,” Unal told Al-Monitor. “In a country like Turkey, where people use the Internet for all sorts of activities including banking services, it is not possible to really turn off the Internet. The whole country comes to a halt then — no flights can take off, no trains can run, students cannot take their exams, people cannot pay their taxes and so on. Turkey is just too far away from being an analog country. We are at a point of no return. There is only one country that forces its limits that far. That is North Korea. As it is not possible to turn Turkey into North Korea, there really is no need for the government to restrict access to Twitter,” he continued.

Pro-government commentators, however, argue that these ongoing leaked tape recordings are not acceptable, and that there is a rumor the most serious of all leaks will come on March 25, just five days before the local election. Hence, the government’s action to restrict access to Twitter can be justified for the sake of preserving the sanctity of the election. When asked what he thinks of these arguments, Turmen told Al-Monitor, “Those who make such statements are just insulting themselves, or they consciously choose not to live in a democracy. But let’s make no mistake. We are fighting for democracy and freedoms, and we should be able to have a good fight to preserve our rights.”

“What happened last night is even in violation of the new autocratic, fascist Internet law that has no match in any civilized country,” Feyzioglu told Al-Monitor. “We are, however, taking the following steps. We filed a criminal complaint with the chief public prosecutor’s office in Ankara against Turkey’s Telecommunications Directorate. We also filed a criminal complaint with the Supreme Board of Judges and Prosecutors against those judges who decided to restrict people's right to free communication. Third, we also filed a criminal complaint about the prosecutor in Istanbul looking into the anti-terror cases for conscious misconduct. Last, we also filed an objection to this court’s decision at an upper court. We will follow the due order accordingly, and we will return this ban by law. That is what Turkey deserves.”

People have been quick, however, to violate the ban and found alternative ways to access Twitter from Turkey, including President Abdullah Gul and CHP leader Kemal Kilicdaroglu. “I tweeted today that sending out a tweet from Turkey has become an underground activity,” Turmen told Al-Monitor while laughing bitterly.