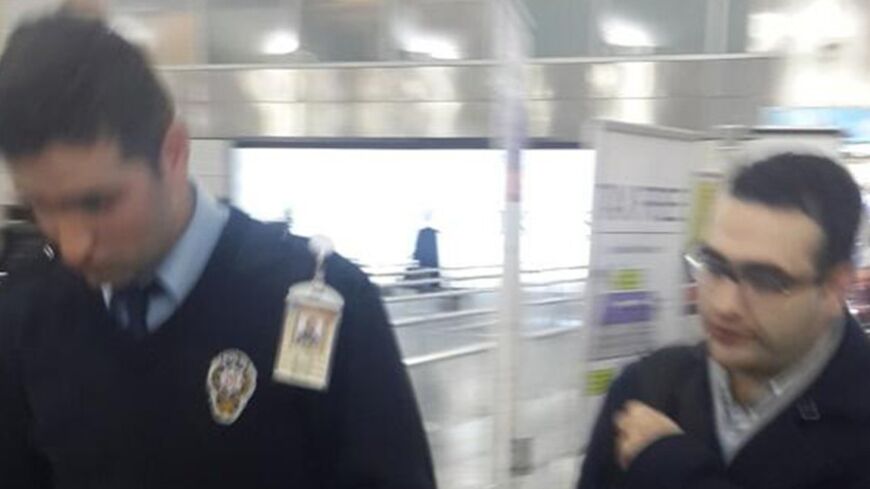 Today's Zaman columnist Mahir Zeynalov is escorted through Istanbul Ataturk Airport while he is being deported to Azerbaijan, Feb. 7, 2014. - Twitter/@svdarslan

The feud between Turkish Prime Minister Recep Tayyip Erdogan’s camp and US-based Sunni religious leader Fethullah Gulen supporters, which hit the surface about two months ago by the revelation of the graft probe against key government members, narrowed down to one single name today, Feb. 7: Mahir Zeynalov. This Azeri-born columnist for Today’s Zaman, identified as a supporter of the Gulen movement in Istanbul, was deported earlier in the day because he posted two tweets on Dec. 25, drawing attention to news articles that talked about Erdogan’s troubling relationship with Yasin al-Qadi, whom the United States considers to be the financier of al-Qaeda.

For Celil Sagir, Today’s Zaman deputy executive editor, however, his deportation has a broader message. “We should not look at Mahir Zeynalov’s deportation as an issue between the two [Erdogan and Gulenist] sides. This is an outright chilling message to all the foreign media — name it: Reuters, BBC, CNN or others, that they should think twice before criticizing the government,” Sagir told Al-Monitor. Zeynalov used to be a sympathizer of the Erdogan government’s policies, but he gradually started to shift his position after the Gezi Park protests in late May and early June.

On Dec. 25, he sent out two tweets. “The first tweet contained a link to a news report about the second wave of a massive graft operation and how police blocked a raid involving more than 40 suspects, including Saudi businessman Yasin al-Qadi — listed as a specially designated terrorist by the United States,” Today’s Zaman reported Jan. 31. Zeynalov’s tweets are no longer present on his Twitter account. “'Turkish prosecutors order police to arrest al-Qaeda affiliates, Erdogan’s appointed police chiefs refuse to comply,' read the first tweet. In the second tweet, Zeynalov shared a news report detailing al-Qaeda suspects’ escape from the country after police chiefs blocked the raid on Dec. 25."

Erdogan's lawyers filed a criminal complaint about these tweets with an assertion that these contained “heavy insults and swear words in a bid to provoke the nation to hatred and animosity.” Celil Sagir, however, finds this accusation baseless. “The problem is that Zeynalov has more than 84,000 followers on his account where he tweets in English, and has about 58,000 on his account in Turkish. But, to claim that he provoked people to hatred and animosity is not a rational accusation. How many of the 76 million in Turkey know English? Moreover, he just shared what the news already reported in those tweets. He was not even making a commentary.”

In 1998, as the popular mayor of Istanbul, Erdogan himself was sentenced to 10 months imprisonment for reading a poem that the judge considered as inciting religious hatred: “The mosques are our barracks, the domes our helmets, the minarets our bayonets and the faithful our soldiers,” he had recited. Erdogan was freed in 1999 after serving four months and returned to politics.

Sagir also drew attention to pro-Erdogan social media activists, who have “actively been pursuing a smear campaign against Zeynalov; twisted his tweets and accused him of things that he did not say or do at certain Internet sites,” Sagir told Al-Monitor.

Separate from Erdogan’s criminal complaint though, Sagir said that an anonymous tip was made to the Prime Ministry’s Coordination Center, where Zeynalov was accused of making “statements contrary to the facts” detrimental to the government. Today’s Zaman reported Feb. 6, “That application was followed by a formal request to police intelligence to identify the owner of the account, and the intelligence unit discovered the account’s owner to be Zeynalov. The decision to deport Zeynalov and ban his entry into Turkey came following the verification that the account in question belongs to Zeynalov.”

Zeynalov and his Turkish wife, Sevda Nur Arslan, went to the airport this morning, Feb. 7, to leave for Baku with self-purchased tickets for the 9:15 flight. “I went to the airport police to tell them that I will be leaving for Baku,” Mahir Zeynalov told Al-Monitor from Baku. “It seems, however, there is a procedure for people to be deported: that the police need to pick them up from their house and take them to the airport. As I had no clue about this procedure, and as I showed up at the airport myself, they cut me a penalty for 103.40 Turkish lira [$46.56]. I paid it.”

Zeynalov also said that he has been deported from the country indefinitely. “I am married to a Turk, and that automatically gives me the residency and work permits," he said. “I can even become a Turkish citizen in three years. That is what the law says. There are many lawyers who volunteered to take this case [to appeal the deportation decision], and I hope to be back in Turkey by resolving this issue. Otherwise, I can only be back by the special permission of the interior minister — that is what the legal procedure is.”

Besides being married to a Turk, Zeynalov is a book-perfect foreign journalist working in Turkey, where his work papers are fully in order. He has a “yellow press ID,” which is issued by the Directorate General of Press and Information (BYEGM). Sagir said, “He filed for his press card’s renewal, but he was told by the people in the BYEGM in January that they received orders from higher offices, and that although his papers are complete they won’t be able to reissue his press card.”

Despite Al-Monitor’s inquiry, the Azerbaijan Embassy in Ankara did not comment on the deportation of Zeynalov. Although Azerbaijan is also a troubled country with freedom of the media, Zeynalov said, “My deportation can be regarded as a symbol where censorship hits a climax in Turkey.”