Why did Turkey seize Bank Asya?

A Turkish government agency made the unprecedented move of taking control of the management of the financially sound Bank Asya. 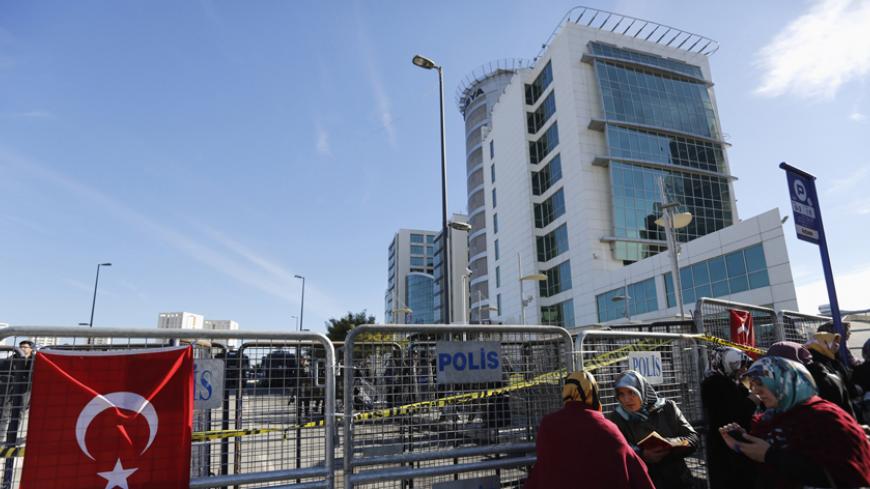 Supporters of the Gulen movement read the Quran as they gather in front of the Bank Asya headquarters in Istanbul, Feb. 4, 2015. - REUTERS/Murad Sezer

In September 2014, in an address to the Turkish Industry and Business Association, Turkish President Recep Tayyip Erdogan made the following statement: “No effort is underway to cause the bankruptcy of a bank. That bank is already bankrupt. They are carrying water by hand to keep it afloat.”

Erdogan’s remarks, which targeted Bank Asya, owned by businesspeople close to the Gulen community, made headlines the following day, creating the impression that the bank had collapsed. Making such comments about a financial institution constitutes a dangerous move, as it could cause panic among clients and lead to mass deposit withdrawals. The headlines, however, failed to spark fear or panic among Bank Asya clients. They were all aware that the bank's Gulenist links had put it in the government's crosshairs.

Under normal circumstances, had Bank Asya's capital structure weakened or had it gone bankrupt, it would be taken over by the Savings Deposit Insurance Fund (TMSF). Yet, not only did the bank have a robust capital structure, but it had also strengthened itself by the sale of several affiliates. Nevertheless, late on Feb. 3, Turkish television channels broke the surprising news that the TMSF had taken control of Bank Asya.

A story run by the state-owned Anatolia news agency at 10:09 p.m. reported: “The Banking Regulation and Supervision Agency (BDDK) established that Bank Asya had violated a Banking Law provision that requires banks to have ‘a transparent and open partnership and organizational scheme that does not obstruct the efficient auditing of the institution’ and therefore decided to transfer 63% of the bank’s preferred shares to TMSF's disposal.” According to Anatolia, the BDDK had determined that Bank Asya had failed to submit information and documents concerning 132 of the bank’s 185 privileged shareholders, leading to uncertainty with respect to those shareholders. Meanwhile, the TMSF only said the bank’s “management had been taken over. Bank Asya’s routine activities will continue.”

The news could have sparked panic despite continuation of the bank’s routine activities. In an interview with Al-Monitor, Masum Turker, former state minister for the economy, commented that the method used to take control of the bank's management was “unprecedented” and could have been designed to trigger panic among clients and push them to withdraw deposits.

Clients did rush to Bank Asya branches, but they did so to open new accounts to deposit modest sums, not to withdraw their money. A deposit holder interviewed Feb. 5 by Samanyolu TV said, “We came over not to withdraw money, but to deposit some. We’ll be selling our [gold] rings and bracelets to keep our bank standing.” Another client was seen holding a banner that read, “The state is trying to sink a bank, and we, the people, are coming to rescue it.”

For a bank to be seized, its capital sufficiency ratio — the ratio of the bank’s capital to its obligations — has to fall below 12%. Bank Asya has a ratio of 18%, which makes it one of Turkey’s strongest lenders. Yet, the government made the unprecedented move of taking control of the bank’s management by citing its failure to submit information and documents concerning some of its shareholders. According to Turhan Bozkurt, economy editor for the daily Zaman, it was “an attempt by the state to bankrupt a bank.”

The move against Bank Asya sparked anxiety among foreign investors in Turkey and had an immediate impact on the Istanbul stock exchange. The shares of banks with foreign partners suffered heavy losses Feb. 3-4.

Was there any anticipation ahead of the evening of Feb. 3 that Bank Asya might collapse? Tracing stock exchange movements, one could argue that such a story was already circulating on the afternoon of Feb. 3. The main index of the Istanbul stock exchange had started the day with a 335-point increase, reaching 90,048 points. In the afternoon session, however, an abrupt wave of heavy selling caused the main index to plunge 2,204 points and close the day at 87,509 points. The banking index suffered the heaviest losses, falling 4.24%, which suggests a sharp reaction by investors in banking shares.

Selling at the stock exchange continued Feb. 4 after the decision against Bank Asya was formally announced. The main index shed another 1,598 points, or 1.83%, to close the day at 85,910 points. Banking shares again suffered losses of more than 4%. Only 10 days earlier, market watchers had been discussing whether the index could break the 100,000-point benchmark.

Foreign investors appear to be worried that a bank's management can be so easily seized in Turkey. To take control of a bank with a strong capital structure — and whose first branch was opened in 1996 in a ceremony attended by the then-prime minister and Erdogan himself, then Istanbul mayor — is not something that foreigners can fathom.

On Feb. 5, Umut Oran, a parliamentarian for the main opposition Republican People’s Party, submitted a written question to Deputy Prime Minister Ali Babacan, who is in charge of the economy, in a bid to uncover what went on behind the scenes. The document, which Oran made available to Al-Monitor, includes three questions: