Shoddy conditions at the new Ottoman Archives building in Istanbul stand to weaken the conservative credentials of the Justice and Development Party. 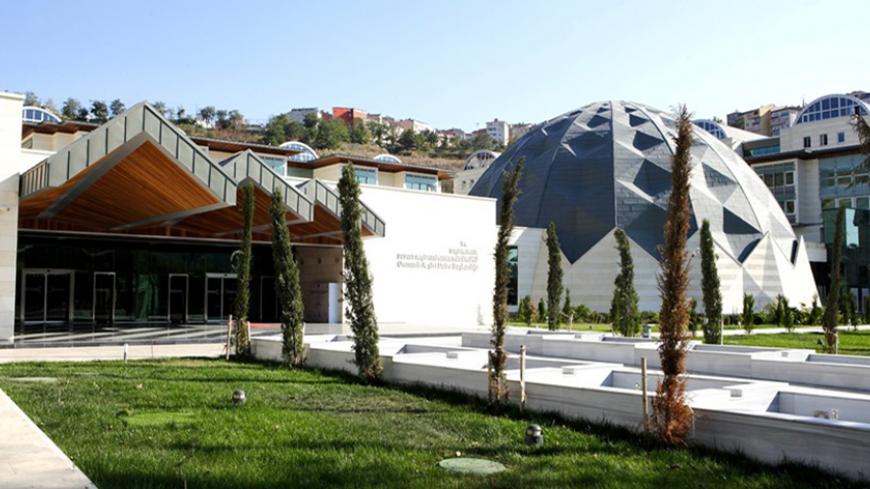 An exterior view of the new Ottoman Archives building is shown in this file photo. - http://www.devletarsivleri.gov.tr

If one judges a political group by how it treats historical treasures, the reported conditions at the new Ottoman Archives undermine the conservative credentials of Turkey’s ruling Justice and Development Party (AKP).

On the surface, the new archives complex in the Saadabad neighborhood of Istanbul’s Kagithane district appears to be a major improvement over the older building in Sultanahmet. Housing 95 million historical documents and nearly 400,000 registers at an on-site underground repository, the 12-building complex boasts a large reading room, conference halls and an outdoor garden overlooking the Kagithane brook flowing into the Golden Horn. It is a serene and peaceful-looking place where any researcher would love to work.

Yet, some researchers and former employees of the Ottoman Archives have taken issue with the new venue. The first and foremost complaint is the location of the archives. Critics question the wisdom of placing Turkey’s historical riches underground in a flood-prone area, between a steep hill and a brook.

One such person is Muzeyyen, not her real name as she fears that talking to the media could affect her ability to conduct research. Muzeyyen, who is pursuing a doctoral degree in Ottoman history at a prestigious North American university, told Al-Monitor that the humidity in the storage facilities was so bad that historical documents requested by several of her fellow researchers had been “literally wet.” It’s not just a document or two, said Muzeyyen, “entire collections are in jeopardy.” After a quick scan of local newspapers, she discovered that “Kagithane, especially Saadabad, has had several major flash floods in the past 50 years.”

Why, then, was this area selected? Muzeyyen said that moving the Ottoman Archives to the new location was one of the AKP’s controversial urban redevelopment projects. Plans to turn Kagithane, once a backwater packed with slums and polluting industries, into an area boasting modern commercial and residential buildings meant potentially huge profits for the AKP-controlled municipality and the Public Housing Development Administration (TOKI). That the old archives building in Sultanahmet was turned into a five-star hotel lends credence to allegations of AKP financial greed.

Muzeyyen also found links between the archives project and the ruling party in the hiring of Muharrem Hilmi Senalp, the designer of the new buildings. Senalp is considered President Recep Tayyip Erdogan’s “court architect” for his tendency to include Ottoman-inspired themes in his works. In fact, the name of Senalp’s company, Hassa Architecture, derives from palace architects of the Ottoman era. Although the new archives complex barely contains any Ottoman-style architecture, it did open to great fanfare with a ceremony in June 2013 attended by Erdogan.

A retired archives employee who also spoke to Al-Monitor on condition of anonymity was even more critical of the new complex and its designer. “The architect had never designed an archives building in the past. Worse, neither he nor the contractor observed any of the international building codes governing archival standards.”

Among the building code issues, the storage facilities are said to lack effective protection against dust, fungus and, as mentioned, humidity. Moreover, claimed the retired archivist, the foundations of the complex are especially vulnerable to seepage from underground water. Apparently, entire walls and support columns are already exhibiting horizontal cracks.

When I showed sketches and images of the cracks to a civil engineer who has worked on major construction projects in Europe, North Africa and the Middle East as an employee of one of Turkey’s largest construction firms, he offered the following assessment: “It appears that the buildings are poorly insulated and are leaking underground water.” It is also possible, he added, that the foundations of the entire complex might be shifting because of soft soil. When asked if these issues could be remedied before a natural disaster struck, the engineer said it is possible: “A group of good geotechnical engineers could redeem the place, but at great cost, time and effort.”

Some researchers have begged to differ with the detractors. Among them is Fariba Zarinebaf, a professor of Ottoman history at the University of California Riverside who has experience with numerous archives and libraries in Turkey, Europe and her native Iran.

“Since I started working [at the Ottoman Archives] as a graduate student in the '90s,” Zarinebaf said, “I have seen great improvements.” She explained, “Back then, it was a small reading room with a few desks and now, a good portion of the documents are digitized, you can read them on computer screens and order high-quality digitized copies within minutes.”

“I think the conditions are far better than [in] many European archives,” said Zarinebaf. “The new building is spacious, modern, well-lit, and quiet.” She also stated, however, “I wish it was closer to the old archives and the center of town,” adding her hope that the collections are properly preserved.

After several unanswered emails and phone calls, Onder Bayir, a department head at the archives, responded to Al-Monitor’s inquiries. “There are no factors that could affect our archives negatively,” Bayir wrote, adding that the storage facilities have advanced humidity control and fire-suppression systems. With respect to the location, he said, “Institutions such as DSI [State Hydraulic Works Directorate] and ISKI [Istanbul Municipality’s Water and Sewage Authority] were consulted when our archives compound was being planned.” In short, according to him, all is well in Kagithane. Let us hope so.

Public trust in state institutions in Turkey is already low because of allegations of corruption, many related to urban renewal projects. If it also turns out that the ruling party, which calls itself “conservative,” not “Islamist,” has moved the Ottoman Archives to Kagithane to legitimize an urban renewal plan benefiting its supporters, it would not be just another scandal. Corruption is a serious matter, but destroying the historical heritage of one’s country for financial gain would be shameful.