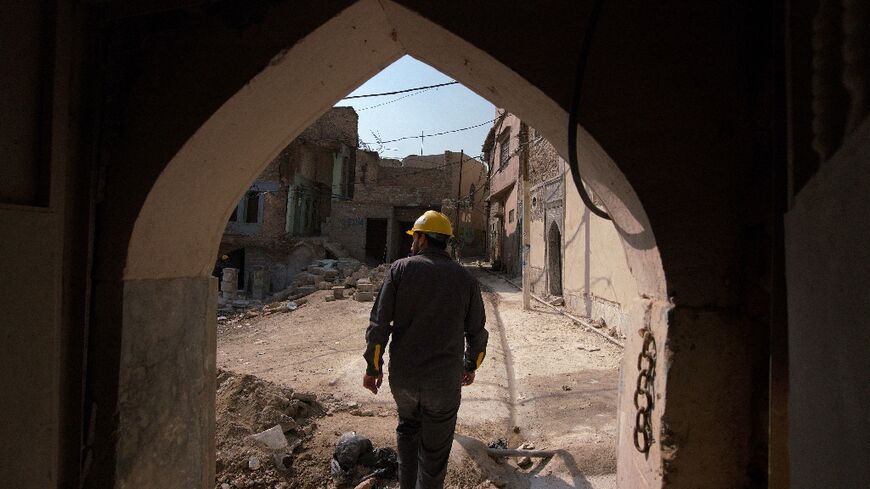 An Iraqi architect exits a traditional house during renovations in the Old Town of Mosul, which was reduced to rubble during fighting to expel jihadists - Zaid AL-OBEIDI
by Tony Gamal-Gabriel
March 9, 2022 — Mosul (Iraq) (AFP)

Beneath what remains of the 12th-century Al-Hadba minaret, builders work on a project to revive Mosul's Old City, reduced to rubble during Iraq's battle to retake the city from jihadists.

Mosques, churches and century-old houses are being brought back to life in the northern metropolis, which the Islamic State group seized as its stronghold before being pushed out in mid-2017.

"Al-Hadba is the icon of Mosul, the symbol of the city," said Omar Taqa, a supervising engineer with UNESCO, the United Nations heritage body which has launched several projects to restore the city's landmarks.

The minaret was featured on Iraqi 10,000-dinar banknotes before the jihadists flew their black flag from the top of its 45-metre (49 yards) spire.

IS chief Abu Bakr al-Baghdadi made his only confirmed public appearance in July 2014 at the Al-Nuri mosque, where he declared the establishment of a "caliphate". 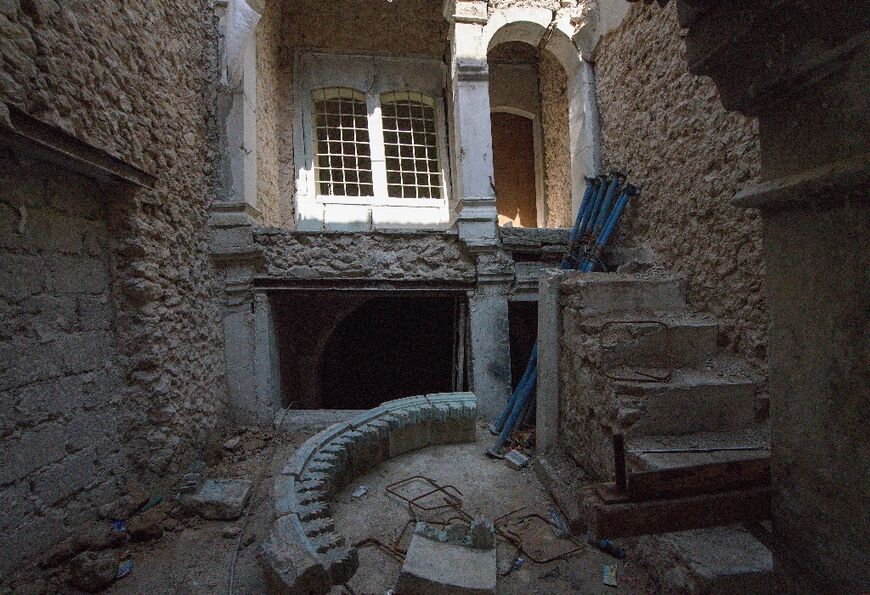 Three years later Iraq's army and a US-led international coalition had forced the jihadists out of Iraq's second city. The Al-Nuri mosque, and the adjacent leaning minaret -- nicknamed Al-Hadba or the "hunchback" -- were destroyed in June 2017 during the battle to take back the city.

Iraqi authorities had accused IS of planting explosives there before their withdrawal.

"We found 11 mines there, ready to be activated," said Taqa. "Some were hidden inside walls."

Only the central area of the mosque remains, its dome propped up on arches supported by wooden wedges. Atop the columns of grey marble, traces of blue enhance the adjoining capitals.

As for Al-Hadba, only its base remains standing, protected by a sheet of tarpaulin. Having removed about 5,600 tonnes of rubble, the reconstruction of the minaret begins in mid-March -- retaining its tilt -- while work on the mosque is due to begin in the summer.

While awaiting reconstruction, the more fragile parts of the structures are kept in a warehouse. 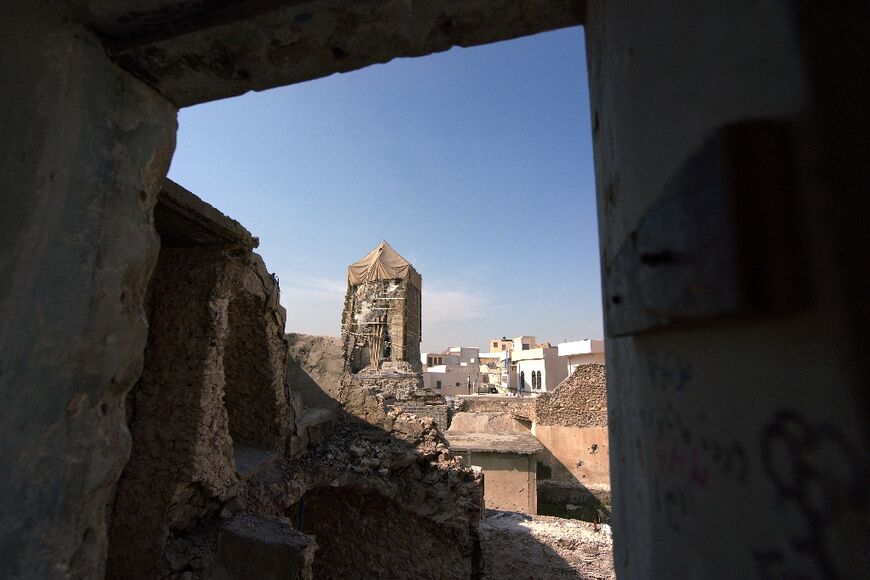 These include fragments of the Mihrab, a niche indicating the direction of Mecca for worshippers, as well as pieces of the Minbar, from where the sermon is delivered and Baghdadi made his declaration in 2014.

Around 45,000 terracotta bricks from the original minaret -- about a third of those that made up the structure -- are lined up on shelves to be reused, Taqa explained.

Discoveries are still being made at the site, where in January a 12th-century prayer room was found under the mosque.

The UN agency raised $110 million for its "Revive the Spirit of Mosul" initiative, largely financed by the United Arab Emirates and the European Union. 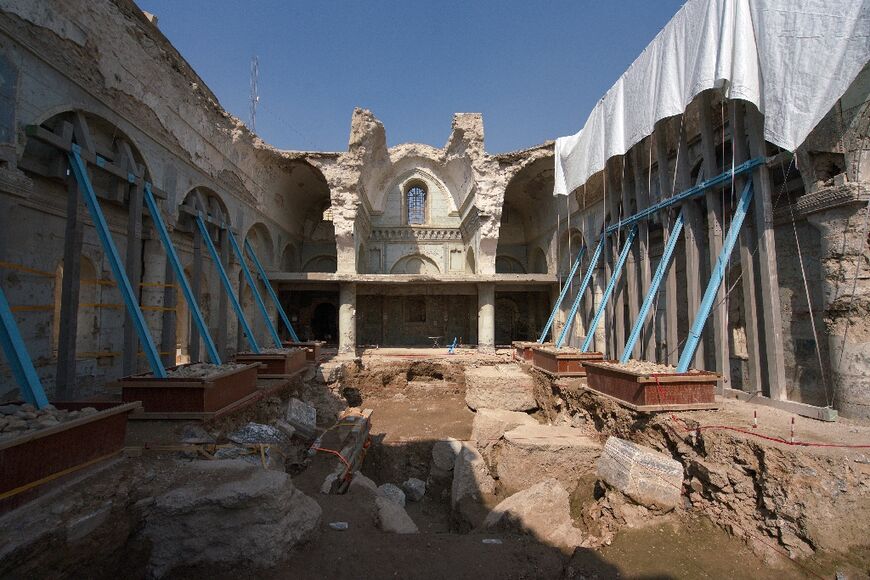 Al-Tahira and Our Lady of the Hour churches also set to be revived, as well as about 120 houses and the local school in the Old City.

Local contractors are handling the construction which has created 3,100 jobs. About half of those are for young people who have been trained in heritage and building restoration, UNESCO said.

Azhar, 48, once sold fruit on a cart in the Old City, before joining the workforce to rebuild Al-Nuri.

"The houses, the streets, were destroyed. The people were displaced to camps," the father of five said, declining to give his family name.

Some wounds remain close to the surface. Azhar's wife died during the battle for Mosul, but he cannot bring himself to speak of her.

In the city, normality has begun to return. There are signs of a fledgling cultural revival, with libraries and museums reopening.

Even as buildings in the Old City lie half-collapsed, coffee shops, workshops and bakers have reopened their doors. At the bend in an alley, women buy their vegetables steps away from workers mixing concrete.

Rows of houses edge closer to complete restoration, some of them between 100 and 150 years old. In the maze of houses that make up the historic district, visitors gasp in awe at elegant alabaster walls with Ottoman-inspired motifs overlooking courtyards. 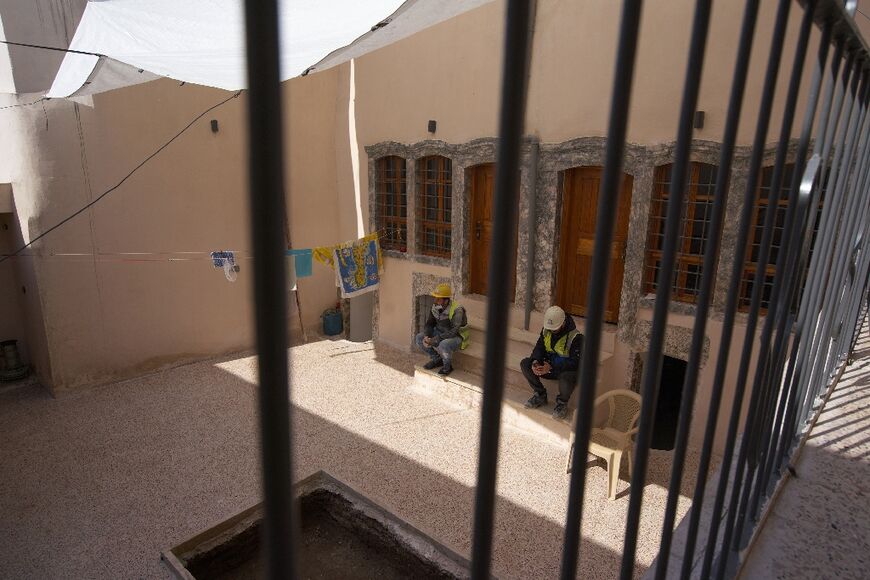 "There are 44 houses that are practically finished. They will be turned over at the end of March," engineer Mostafa Nadhim told AFP. Another 75 are to be completed this year.

The project will also see the rehabilitation of infrastructure including "electric cables, street lights, water pipes and pavements", Nadhim added.

Ikhlas Salim, who moved back into her home just a few months ago, heats up a lunchtime meal for her two sons. They work on nearby reconstruction sites.

When she first returned to her home, it was in ruins, but she said its restoration has had a "therapeutic" effect.

"It's my grandparents' house," the 55-year-old said. "At first, we had lost hope of coming back."