Nadia Habash, named by Middle East Architect magazine as one of 50 influential architects in the region, says preserving heritage is a national statement. 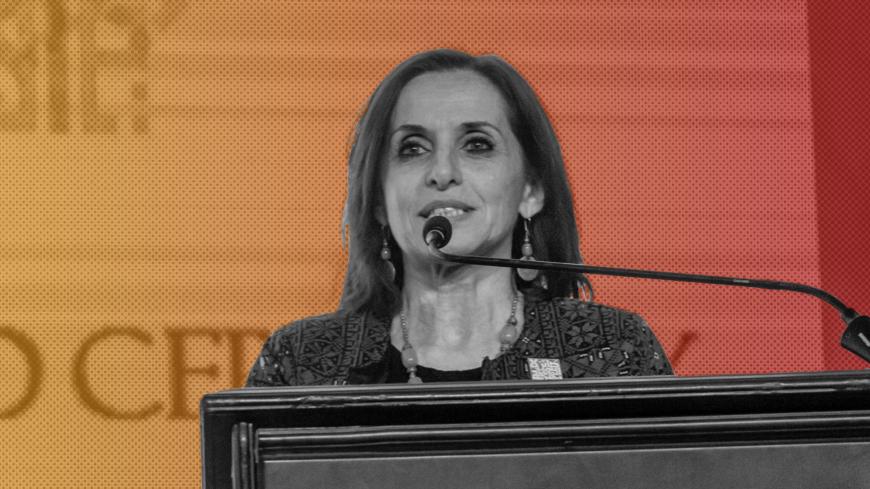 Architect Nadia Habash speaks at the Tamayouz Excellence Award for Women in Architecture and Construction in Amman, Jordan, in a picture uploaded Dec. 7, 2019. - Facebook/Tamayouz.Award

RAMALLAH, West Bank — For nearly four decades, Palestinian architect Nadia Habash has sought to preserve her country’s architectural heritage through eco-friendly renovations and rehabilitation of traditional buildings that serve the needs of the day.

"Palestinian architecture, an integral part of our cultural heritage and national identity, is subjected to systematic destruction by the Israeli occupation, which aims to eliminate evidence of the existence of our ancestors on this land," wrote the award-winning architect in an article titled "Architecture as Resistance."

"Preserving our cultural and natural heritage, keeping it alive, and reflecting it in our new designs is part of our national struggle," Habash, director of Habash Consulting Engineers and adjunct lecturer at Birzeit University, wrote in the article published in 2018.

“I have never sought material gains. I believe that my work is a kind of national struggle to preserve the architectural heritage in Palestine,” Habash told Al-Monitor shortly after she was chosen by Middle East Architect magazine as one of 50 influential architects of the region for 2019.

One of the architect’s best-known works is the rehabilitation of the Old Market in Bethlehem, located in the historical center of the town, in close proximity to the Church of Nativity. Habash led the five-year project, which was completed in 2018, and gave a face-lift to the historical structure of the bazaar that provides a livelihood for small farmers and breeders.

The intervention in the bazaar’s roof managed to ensure that the rain water that used to flood the stalls is collected in wells, and waste is compacted in the waste compactor located in the center of the market and disposed of twice a week instead of twice a day. Habash said she was happy to contribute to the needs of the small business owners in the bazaar, who are mainly women selling their produce and dairy in order to make a living.

The 60-year-old architect began her career in 1982 after graduating from the Department of Architectural Engineering at the University of Jordan. When she returned home, she looked for a job with an architectural firm. But at the time, she found out that the firm was engaged in projects in collaboration with the Israeli civil administration, which Habash did not want to be part of because of her stance against the occupation.

Instead, she took up an academic post in the Faculty of Engineering and Technology at Birzeit University, and subsequently received a scholarship for a master’s degree at the University of Michigan, where she specialized in the philosophy and theories of architecture and professional architecture.

In 1997, she established her own architectural firm with her brother - the Habash Consulting Engineers, in Ramallah. The competition in the market was fierce at the time and she had to carefully choose her projects, she explained.

It took her a year to land her first project, which was to build water reservoirs without distorting the local fabric in two historical Palestinian villages in the northern West Bank, Der Istya and Kufor Abboush.

The reservoirs were to be located in the historical center of the villages while ensuring that they did not harm the traditional architecture. So Habash studied the vernacular architectural style and designed tanks that would blend in with the surroundings. The project received the Distinguished Project in Palestine Award 1998.

Habash and her firm acquired a name in restoration and were involved in projects with international funding. In 2003-2005, she worked on a project funded by the United Nations Development Program, which aimed to rehabilitate the old center of the historical West Bank village of Arraba, specifically Abdul-Qader Abdul Hadi Palace, Hussein Abdul Hadi Palace and the old road known as Al-Qasaba. The project — Restoring Arraba Palaces — had a tight budget but Habash worked hard at it anyway. “It was very important for my career to make my mark in a restoration project of a historic place such as these palaces,” Habash said.

The initial idea was to turn the two palaces into a restaurant and a hotel. She managed to persuade the municipality that the two palaces would be put to better use as a cultural and community center and a family and child development center. Her work was recognized as the best project in the Enterprises category of the Hassib Sabbagh and Said Khoury Award. It was also recognized as the best architectural project in Palestine in 2017.

The turning point in her career, however, was her collaboration from 2006 to 2010 with Swiss architect Peter Zumthor, a Pritzker Prize laureate.

This came after she became the local expert in a project that won the first prize in the conceptual design competition launched by the Ministry of Tourism and Antiquities and UNESCO for the master plan of the Qasr Hisham Archaeological Park in Jericho, including the protective sheltering of the mosaic floors of the Grand Bath Hall and other sensitive areas. The project also included turning the palace garden into a green space akin to the palaces of Andalusia, despite the hot weather conditions in the region.

Her collaboration with Zumthor was a great career boost. “It was an experience that was difficult to repeat,” Habash said in Middle East Architect.

In 2016, Habash was part of the Vernacular Heritage Pilot Enhancement Project in As-Samou, located in the southernmost part of Hebron, in the West Bank. “The project was an ideal application of what I have endeavored throughout my career to make a change, through community development and the preservation of the architectural heritage at the same time,” Habash said.

At the start of the project,which was in cooperation with Samou Municipality and an Italian firm, Habash and her team had to convince the residents of the area of the importance of restoration and rehabilitation and to involve them in the project. In 2019, as the project was wrapping up, the residents had become partners in the restoration process and the preservation of 12 residential complexes — called "ahwash" in Palestine — and turning one of them into a cultural youth center, which has become the activity hub in the area.

“Restoration was carried out at the lowest costs. Some of the locals were also trained in basic restoration works, in case they need to do small-scale renovations in the future,” she said.

Habash's business, academic work and involvement in local organizations ran parallel. In 2002, she took up a job as an adjunct professor in the Faculty of Engineering at Birzeit University where she continues to teach and mentor her students. She was elected as a city council member in the Ramallah municipality in 2012-2016, and she is the only woman to have been elected as a member of the council of the Engineers Association Jerusalem center where she headed the Ramallah and al-Bireh branch in 1999-2002. She is also one of the founders of the Association of Architects in Palestine.

Habash believes that she could have offered more to the world if only her freedom of movement had not been restricted. The Israeli authorities banned her from traveling for 29 years, from 1988 until 2017. When the ban was lifted, she lectured at Arab and foreign seminars and became a member of the jury for several Arab and international awards and prizes.

But after these long years, had she been able to build her dream house? “Working according to national determinants does not help make the kind of money needed for a [dream] house,” she sighed.