The Palestinian Museum, which has received the Aga Khan Award for Architecture, combines an ecological design and harmony of landscape 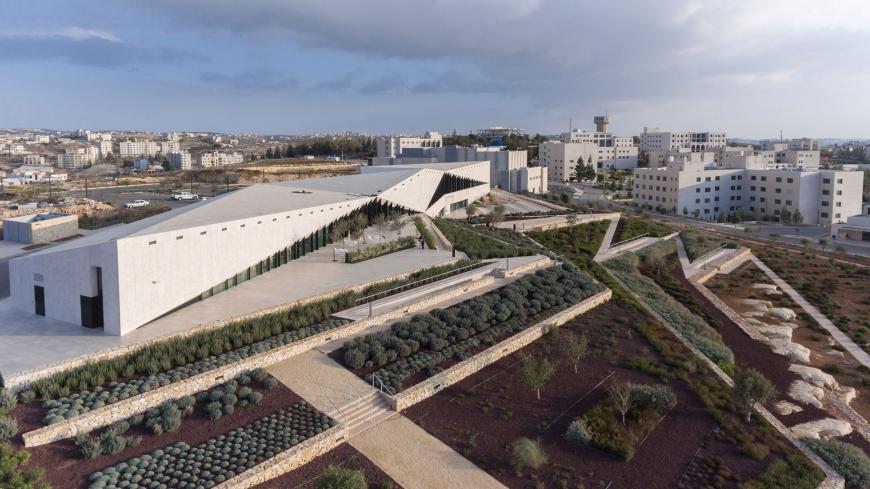 RAMALLAH, West Bank — Standing on a hill that looks out over the town of Birzeit, the Palestinian Museum is a cultural oasis whose architecture mimics the surrounding landscape. The museum's hillside gardens and stone walls imitate the stone terraces used in agricultural lands in the Palestinian villages and the building itself is made of limestone quarried locally near Bethlehem.

The museum was designed by Irish architect Heneghan Peng, who won the international competition in 2011. Peng had spent four months in Palestine to familiarize himself with the country's architectural heritage before he submitted his project for a multipurpose center of culture and education. The stone terraces that surrounds the building were built by Jordanian landscape architect Lara Zureikat.

In August, the Palestinian Museum, the largest cultural center in the West Bank, won the Aga Khan Award for Architecture, along with five other projects: Bahrain’s Revitalisation of Muharraq, a World Heritage site; Bangladesh’s Arcadia Education Project; Russia’s Public Spaces Development Programme, in the Republic of Tatarstan; Senegal’s Alioune Diop University Teaching and Research Unit, in Bambey; and United Arab Emirates’ Wasit Wetland Center, in Sharjah. The Aga Khan awards do not only reward architects, but also identify municipalities, builders, clients, master artisans and engineers who have played important roles in the realization of a project. The six winners, selected from among 20 projects, will share the $1 million award.

"The selection of the Museum was due to its powerful embodiment of a cultural identity under duress at the intersection of land and architecture, nature and people,” the jury said in the press kit announcing the awards.

"The award is an important incentive for the museum, which was realized under difficult conditions in an occupied country," Palestinian Museum media coordinator Haneen Saleh told Al-Monitor. "This global appreciation gives hope both to us and to the younger generations that we can achieve [global projects] despite the difficult circumstances."

The Palestinian Museum’s construction took three years, starting from the groundbreaking on April 11, 2013, and opening of its doors on May 18, 2016. Stretching over an area of 40,000 square meters (10 acres) of land on lease from Birzeit University, the museum was created by the Taawon Welfare Association, based in Switzerland. The museum, 3,500 square meters (0.9 acres) of exhibition and educational space, cost $30 million. Around $25 million has been raised for the project, with funding from individuals and institutions, including the Al-Qattan family, the Bank of Palestine and two Middle Eastern construction companies, Projacs and Consolidated Contractors Company, according to the Art Newspaper.

The aim of the museum is preserving Palestine's national heritage and conveying its cultural narrative to all parts of the world, according to its website. Unusual for a museum, it does not have a permanent collection. Despite this, it has managed to showcase large-scale exhibitions, such as “The Labor of Love,” a display of Palestinian textiles and ornaments, in 2018. One of its current objectives is to create a large-scale digital archive of old Palestinian photos.

The great strength of the museum, however, is its ability to combine ecological design with harmony with the landscape.

The museum's facilities manager Bashar Ammar told Al-Monitor that the museum is surrounded by plants that are unique to the region. “The museum’s building only occupies 6% of its total area of 40,000 square meters. The remaining area was devoted to fruit trees as well as around 30,000 medicinal and aromatic plants,” he said.

Saleh underlined that the most important characteristic of the museum’s architectural design is its harmony with nature, saying, "The building does not impose itself on its surroundings but rather merges in it." She added that part of the money from the award will be go to the architects and construction companies, and the rest - which will go to the museum itself - will be used for new projects.

Ammar said that the museum is eco-friendly. “The museum works to improve the quality of life. It was the recipient of the LEED Gold certification in 2017 because it provides 16% of its energy consumption and 50% from wastewater by collecting rainwater, refining wastewater and taking advantage of natural sunlight," he said.

The Palestinian Museum is the first new architectural site in Palestine to receive the Aga Khan Award for Architecture. In the past, Palestinian restoration projects have won this award: the reconstruction projects of the Old City of Hebron, which was implemented by the Hebron Rehabilitation Committee in 1998; the restoration project of the Islamic Orphanage House in the Old City of Jerusalem, also implemented by the Taawon Welfare Association, in 2004; and the project to revive the historic old town of Birzeit, which was implemented by Riwaq Center for Architectural Conservation in 2013.

The museum has also won several international awards in the past. In July 2017, it received the President's Award from the Royal Institute of the Architects of Ireland. In November 2017, it came in first in the Culture category at the World Architecture Festival in Berlin.

Saleh pointed out that the museum plays an important social role, especially with the younger generation, receiving annually hundreds of students from villages, cities and refugee camps that organize school trips as part of an agreement concluded by the museum with the Ministry of Education.