A new green museum dedicated to Palestinian children will promote sustainable practices, and teach about local culture away from the confines of the classroom, Dalia Hatuqa writes. 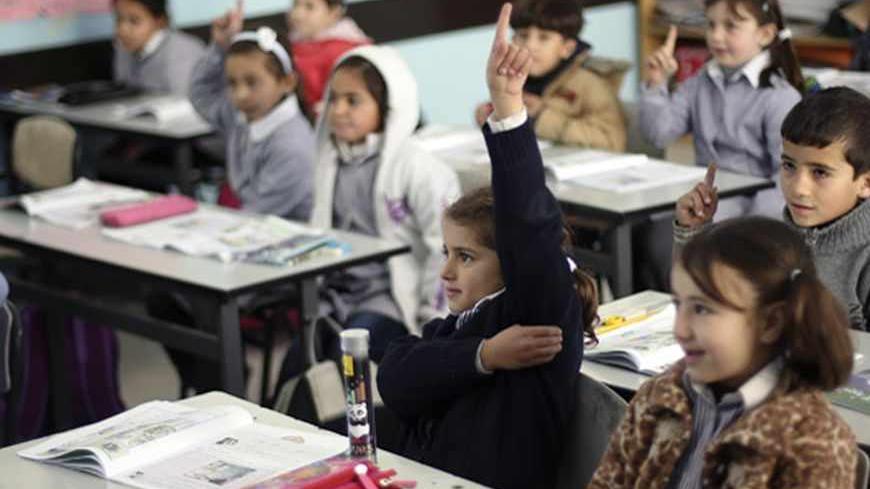 Palestinian first-graders sit with their schoolbooks during class in the West Bank city of Ramallah, Feb. 4, 2013. - REUTERS/Mohamad Torokman

In a land where space is limited, and public parks and gardens are few and far between, a Bethlehem-based mother of two is working on opening a museum for children — who comprise more than 40% of the Palestinian population — with a special focus on green living and sustainability.

Drawing inspiration from visits to children’s museums across the globe, Layla Kaiksow has a one-of-a-kind museum in mind for Palestinian children — one that can help them not only learn about sustainability and conservation, but also get them immersed in their culture away from the confines of the classroom.

“In Palestine, people are conscious of the environment in many ways, but in a lot of other ways they are not,” Kaiksow said. “Traditionally, Palestinians have not been a wasteful people, but as things ‘developed,’ trash became rampant and conservation isn’t exercised as it once was. We need to plant green ideas in children’s heads from the outset.”

Plans for the new museum — expected to open in the summer of 2014 — are still at an early stage. The museum, which targets children between the ages of one to 12, as well as their families and educators, is slated to not only be environmentally friendly, but also culturally rooted.

The exhibits will be designed to teach children about local culture and traditions, shedding light on the environment and sustainability, and garnering more interest for math and sciences away from the traditional methods being used in schools.

A water exhibit is also in the making so children can learn about why this precious resource is particularly coveted in the region, along with instructions on how to use it sparingly. “We are not shying away from politics in the museum,” Kaiksow said. “But it’s also not our focus, so we may teach the kids some political facts on a basic level.”

The museum is being created using the “only local” toolkit outlined by the Madison Children’s Museum, known for its commitment to sustainability and community collaboration. This means that during its foundation, local architects, curators and exhibition designers will be hired, and local and recyclable materials will be used whenever possible.

For the math and science exhibitions, the museum is teaming up with Al-Nayzak, a local organization that focuses on encouraging scientific innovation among young Palestinians. Shams/Ard, Palestine’s first green design firm, will be building the museum’s furniture (and some of the exhibitions) out of discarded, recycled or locally produced materials. “The aim of this museum is to teach children through play about green concepts and sustainability, among other things,” said Danna Masad, one of the Shams/Ard architects.

As part of the museum’s vision to promote the use of sustainable energy and support the prevalence of green ideas in the Palestinian territories, unconventional methods will be used during the renovation and building phase. This includes setting up a geothermal heating and cooling system in the building, as well as installing a solar energy and grey wastewater treatment system. There are plans to also operate a mobile museum in the form of a bus running on bio-diesel in the months following the museum’s opening.

The exhibits will be designed with Palestinian culture in mind, using objects made in cities like Hebron, known for its glass and traditional ceramics, and Bethlehem, where hand-stitched embroidery is made. With that in mind, one of the workshops envisioned will include a station where kids can make their own embroidery using felt and glue. Another is an arithmetic exhibit where children can learn about the traditional process of making ceramics, and stack plates as they solve math problems.

An old historic villa that’s just a few streets away from Manger Square and the Church of the Nativity was chosen to house the museum. An architecture firm that restores historic buildings throughout Bethlehem will renovate the house. The structure itself was chosen for its proximity to the city’s religious sites and its vaulted ceilings, large windows, arched doors and spacious backyard where an old pine tree provides shade over what is to become a large play area.

While the renovation of the building is being funded by the Russian government, the museum itself has so far only received funds from individual donors. A Kickstarter campaign is in the works for the summer and the long-term goal is to form an endowment for the museum. In the meantime, the museum is aiming for individual donations and grant monies.

Kaiksow is hoping that the museum will attract Palestinian children from all over the territories and from inside Israel. She envisions that, with the right exhibitions, the museum will be a destination for educators interested in teaching children through interaction and creativity.