A unique cultural center has sprung up on a remote hilltop in eastern Turkey, bringing life to a region hit by poverty and migration. 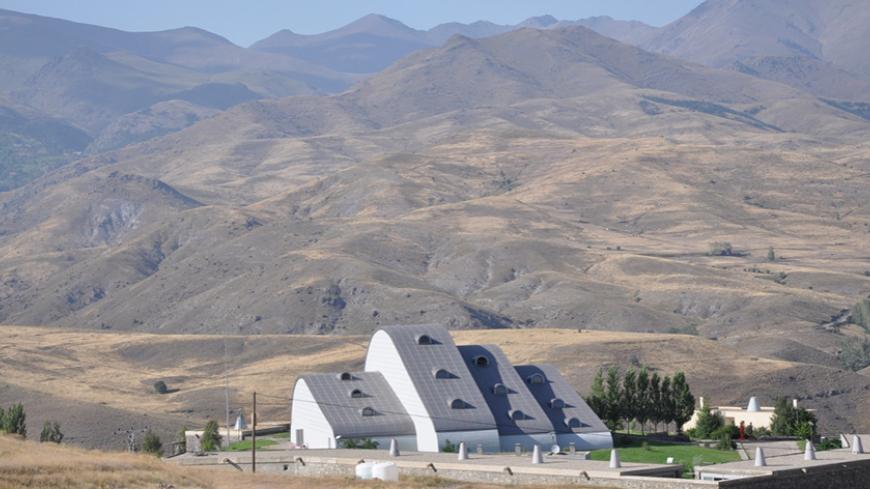 A barren hilltop in a remote, impoverished backwater is hardly a place one would expect to find a flourishing museum with growing international acclaim. For the Baksi Museum in eastern Turkey, however, being in the middle of nowhere is inherent to its existence and the many roles it has taken on. The brainchild of prominent Turkish artist Husamettin Kocan, the museum is Kocan’s tribute to his native village, which, since its inception as a “crazy” idea three decades ago, has evolved into a vibrant cultural center and a social project injecting life into one of Turkey’s poorest provinces.

Baksi is the old name of the village of Bayraktar in Bayburt province, nestled high in the Anatolian steppe, not far from the eastern Black Sea coast and 1,400 kilometers (870 miles) from Istanbul and 900 kilometers (560 miles) from Ankara.

The Baksi Museum was inaugurated in 2010 as the product of a decadelong, painstaking work by Kocan and his wife, Oya, with the support of art enthusiasts and at a cost of about $10 million. Since then, it has continued to expand with new contributions.

Kocan came up with the idea on a winter's day in 1987 when he traveled to his native village for the funeral of his father. Much to his chagrin, he discovered that the village’s “mansion” — a place where the locals gathered to socialize, discuss politics, recount old stories, and recite folk poetry and songs — had shut down. “The people had retreated to their homes and the bonds between them had weakened. The place used to be like a cultural center, so we decided to build it anew,” Kocan told Al-Monitor.

A whirlwind of ideas followed. The Kocans wanted to also add a library and workshops to help salvage traditional handcrafts in the region. Their initial thought was to create a sort of “handcrafts research and application center,” but soon it evolved into a museum project.

Construction began in 2000, marking the beginning of an arduous, decadelong endeavor. In the area that was difficult to access, transporting building materials and finding construction workers was a challenge. The main building was completed in 2010, and two years later, a new exhibition hall, the Warehouse Museum, was added to the structure.

The Baksi Museum today is a large cultural center covering an area of 30 hectares, including exhibition halls with permanent and seasonal displays, workshops for both modern art and traditional handicrafts such as weaving, pottery and natural dyeing, a conference hall and a guesthouse. A 500-seat amphitheater is in the making.

Following its inauguration, the museum quickly attracted international attention. Kocan said, “It’s because Baksi connects the museum and life.” In 2014, the museum was awarded the European Council Museum Prize for its efforts “to bridge the gap between the center and the periphery, helping the local population to remain economically and culturally rooted in their territory and to sustain cultural memory by reviving traditional weaving and textile manufacturing.” This recognition is particularly dear to Kocan, along with the words of the rapporteur of the prize, who said, “This museum, its governance and the activities associated with it provide a very inspiring model of how the principles of the Council of Europe Faro Convention on the value of cultural heritage for society can be adopted to fit locally.”

Stressing the museum’s dedication to products of different cultural and economic layers, Kocan said, “The artist’s efforts of pushing boundaries can transpire in various forms. Embarking on a journey and stepping into the unknown is what matters for an artist. [The Baksi Museum] can be perhaps described as the outcome of this type of artistic motivation.”

The museum has so far won about 30 prizes, including from the Turkish parliament. Despite its difficult access and although it closes during the region’s long winter season, its popularity has steadily grown, reaching 15,000 visitors per year. Touring the museum in 2011, then-US Ambassador Francis Ricciardone said, “It is worth coming to Bayburt, if only to visit the Baksi Museum. What a great place it is, just as we were told. One really is at peace and quiet here.”

And how did the villagers react to a culture monument springing up in their vicinity? Not very enthusiastically, according to Kocan. “The locals were initially saying 'What is this all about?' Today, however, they take pride in the museum and act as emissaries, bringing visitors,” he said.

Kocan conceded that many had seen the project as “madness” because of its location. “This is a place in the middle of Anatolia, high in the steppe, hit by outbound migration and cultural alienation. Some called this investment a madness, an insanity. I don’t know whether they are right, but the place was created with passion and love. And love is madness in one sense, but also richness in another — a shared passion. People are now coming with ideas and contributions,” he said. “Certainly, it’s not the product of a rational mind and behavior. Reasonable people had found it irrational, asking who in the world would come here to visit.”

Kocan’s dream for the next decade is to see Baksi further institutionalized, putting out creative brand products and attracting crowds lining up to both visit and stay. The queues already forming on some holidays are giving him hope that this dream, too, will come true. So is the support of top Turkish artists, who have donated pieces to the museum’s collections. In its short history, Baksi has already hosted a gathering of the International Council of Museums and a series of other events, including concerts by popular Turkish musicians.

For Oya Kocan, the head of the all-female board of the Baksi Culture and Arts Foundation, women and children are the priority target groups. “Through our workshops, we are engaging women in the production process. The products they create are put on sale in the museum,” she told Al-Monitor.

The next project, she said, is a center where unemployed women will use traditional skills to make products such as jewelry, bags and embroideries. “There is an idle female population in Bayburt city who used to work in agriculture and are stuck at home after migrating to the city,” she said.

For the children of the region, the foundation has been organizing drawing competitions in the past four years, collecting thousands of entries from surrounding villages and selecting 30 students for a one-week workshop at the museum. Istanbul’s prestigious Robert College, meanwhile, has launched a social responsibility project, as part of which its students come to Baksi for workshops with their local peers in various fields such as guitar playing, acting, sports and “whatever Bayburt’s children like to do,” she said.

That artists can change the world is certainly true, and Baksi is an impressive example. The visitors of this “crazy” place may be also considered “crazy” travelers today, but looking at the pace of the museum’s progress, this is not going to last long.