The restoration of Beyazit State Library, established by Sultan Abdulhamid II in 1884, has been short-listed for the prestigious Aga Khan Award for Architecture. 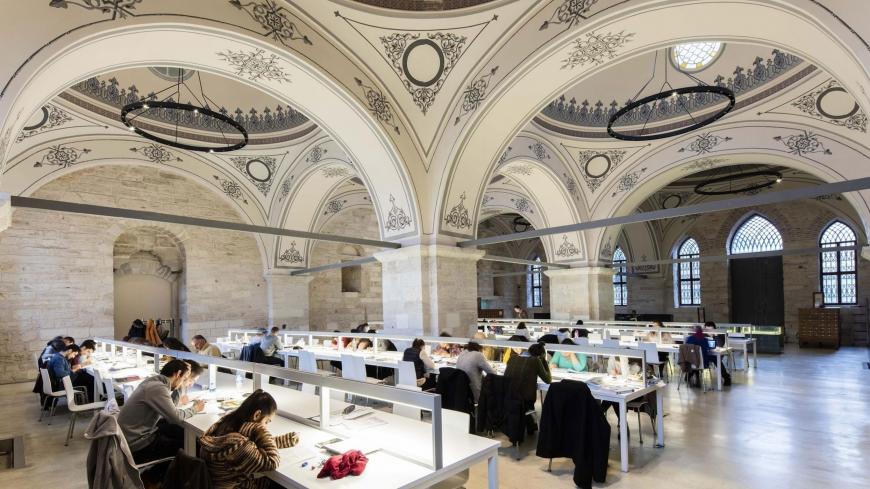 Standing in the heart of Roman Constantinople, next to Istanbul’s Grand Bazaar and its open air market of secondhand books and manuscripts, the Beyazit State Library demonstrates that a 19th-century Ottoman edifice can retain its character and still serve the public on a daily basis.

The oldest public library in Turkey, the Beyazit State Library was founded by Ottoman Sultan Abdulhamid II in 1884 by converting a few buildings of a 16th-century complex that contained a mosque, a caravansary with stables, a hospice and a soup kitchen for the poor. The caravansary and the attached stables, with their multi-domes and a multicolored roof, were turned into the library and a wooden cabinet — made by Abdulhamid II whose skills in carpentry matched his mastery in political chessboard — was put in the main room.

The restoration of the library was carried out with a light and minimalist touch; it made a functional rearrangement of interior spaces and added only a few items, such as display cases for books and modern lighting.

“The aim was not only to save the building but the books and manuscripts,” Hande Pusat, the design director of Tabanlioglu Architects who carried out the renovation project, told Al-Monitor. “The Ottoman structures were damaged by the Marmara earthquake in 1999.”

The team reinforced the structures while rearranging the interior spaces. They also cleaned the surfaces and the decorations.

The library’s collection has more than 1 million works, including more than 800,000 printed books, more than 25,000 rare manuscripts in Arabic, Persian and Ottoman Turkish, maps and even money. Since 1934, it gets a copy of all books published in Turkey.

Manuscripts and other precious items — some of them badly preserved in the past — have been put in the limelight, shown on shelves in big glass boxes in the center of two of the three reading rooms. The lighting designed by the Studio Dinnebier from Germany — gentle and indirect — makes use of black round chandeliers, similar in design to those in 15th-century mosques.

After four years, it has now been short-listed for the Aga Khan Award for Architecture. Prestigious and well-endowed (the total sum disbursed amounts to $1 million), the prize is assigned every three years to outstanding projects that not only show technical and aesthetic excellence, but also improve the overall quality of life of Muslim societies. The winners for 2019 will be announced later this year.

Iranian architect and urban planner Farrokh Derakhshani, director of the Aga Khan Award for Architecture, said during the short-list announcement, “[The project] not only handled the restoration of the rare and old manuscript rooms skillfully, introducing contemporary design elements in a historic structure, it also uncovered evidence of even earlier civilizations.”

The restoration introduced new multipurpose spaces to the traditional library. The quadrangular interior courtyard, covered in the 1950s with some out-of-place concrete structure, has been freed and transformed thanks to a translucent roof and sofas into a space for socializing, cloistered and secluded from the outside; a cafe selling refreshments can be found in the backyard.

A 19th-century annex supplies additional space for reading rooms, storage and administrative offices. Even though it was not part of the restoration project, it has a peculiar story to tell. It was built for the local gendarmerie, and it was transformed into the dentistry school of Istanbul University at the beginning of the 20th century. In 1974, it was earmarked for demolition to expand an existing road and to create a parking lot for tourist buses and funeral coaches; it was finally joined to the main library in 1998. It perfectly represents Istanbul's convoluted history of cultural revolutions and destructive development strategies.

That history, however, goes much deeper. During the restoration project, architects from Tabanlioglu studio discovered during the construction the remains of a Byzantine church — in the backyard just outside the main building, where they put up a technical cabin. It has been identified by the experts at the Archaeological Museum in Istanbul as Sant Anastasia, a triple apse basilica dating from the 5th or 6th century that has been properly excavated and protected, and is now displayed for public view through a plexiglass floor.