Benjamin Netanyahu has declared several times, even to the US Congress, that he will accept the establishment of a Palestinian state, but all signs indicate that he now rejects a two-state solution. 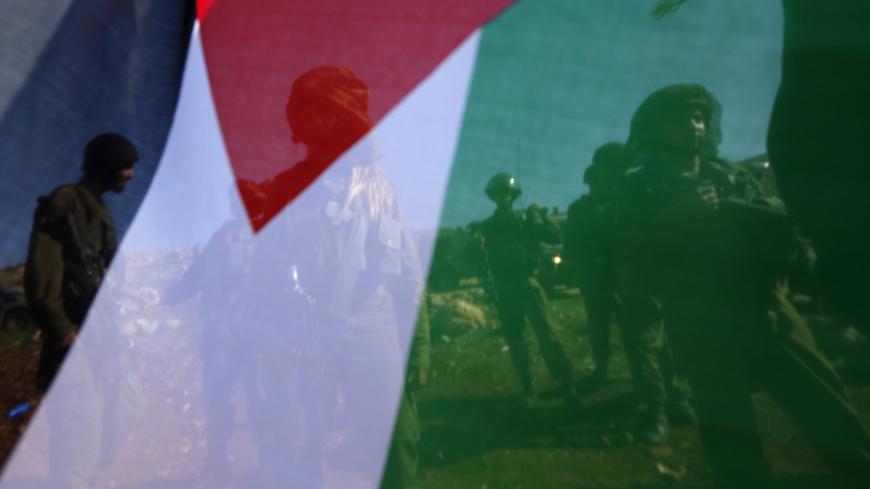 Israeli soldiers are pictured through a Palestinian flag as they stand guard during a protest by Palestinians against Jewish settlements near the West Bank city of Ramallah, Dec. 10, 2014. - REUTERS/Mohamad Torokman

The March 3 speech by Prime Minister Benjamin Netanyahu to the US Congress is expected to focus on the Iranian threat, but the Israeli public — and the American one, for that matter — probably also expect to hear a few words on the “Palestinian threat.” The premier and Likud Party chair must clarify his actual stance on the Israeli-Palestinian conflict. Is it the position he expressed less than three years ago from the same congressional podium, or what he says today at home?

Indeed, in his loudly praised May 2011 speech, Netanyahu declared, “In any peace agreement that ends the conflict, some settlements will end up beyond Israel’s borders.” To prevent any misunderstandings, the prime minister promised, “We will be very generous on the size of a future Palestinian state … I am willing to make painful compromises to achieve this historic peace.” Netanyahu has used the word ''peace'' in his congressional addresses no fewer than 64 times. Today, it seems, the word has been eliminated from the vocabulary of the ruling party's upper echelons.

At an election rally in the southern town of Kiryat Gat Feb. 5, less than a month before his scheduled speech to Congress, Netanyahu wondered aloud, “What will happen to each piece of land from which we withdraw?” His responded, “It would be taken over by radical Islam,” an answer that he has been repeating in almost all his recent public appearances. This fatalist approach is the complete opposite of his placating 2011 congressional speech about evacuating settlements and achieving a historic peace.

Not only that, but in the 2011 speech Netanyahu presented the recalcitrance of the Palestinian Authority as the main if not only obstacle to achieving a peace arrangement. “All six prime ministers since the signing of the Oslo Accord, myself included, agreed to the establishment of a Palestinian state,” the prime minister said. “So why was peace not achieved?” His answer: “Because up to now, the Palestinians have rejected an arrangement for a Palestinian state as long as they have to agree to a Jewish state at its side.” Netanyahu promised that “the face of history will be changed” if only Palestinian President Mahmoud Abbas tells his people these words: “I will accept a Jewish state.”

These six words have since become an inseparable part of the prime minister’s diplomatic credo. Convince Abbas to recognize a Jewish state, Netanyahu urged Congress in 2011. “With such a partner, the people of Israel will be prepared to make a far-reaching compromise.” Two weeks ago, however, his position seemed to undergo a radical change.

In an interview published Feb. 12 on an Russian-language Israeli website, the Likud chairman said, “Even if the Palestinians agree to all our demands in return for our withdrawal, the danger will remain of a radical Islamic takeover.” Netanyahu stated that he was “aware of the danger of a binational state, and I don’t want it,” adding that despite this danger, he was “not willing to try and cure a headache with a guillotine. I am not willing to commit suicide.” By stating this, Netanyahu actually moved from the position he had been expressing over the last few years, in which the two-state solution was essential to prevent Israel from becoming a binational state.

Some would say that there is no need to take this election propaganda seriously, and that if Netanyahu remains in office after March 17, political and diplomatic realities will dictate his policy. Netanyahu’s decision to parachute in veteran Likud member Benny Begin and place him on the party’s list of Knesset candidates is an indication that the change in Netanyahu’s position on a two-state solution is more than campaign rhetoric. In this context, it is worth mentioning Begin’s words, as a minister in Netanyahu’s government, at a conference held in March 2012 in Jerusalem. He was quoted as saying that “understanding that there’s no such reality as two states” enabled a man like himself to stay in government. One could assume that before agreeing to return to politics and the Knesset, Begin made sure that this understanding is indeed still firm and valid.

A similar message was sent this week to Netanyahu by former Likud Minister Gideon Saar, who quit Netanyahu’s government, perhaps to try to bring him down from the outside and replace him as party leader. Saar wrote on his Facebook page, hinting, it seems, at what Netanyahu can expect if he decides to form an alliance with the “leftist” Zionist Camp co-chairs, Isaac Herzog and Tzipi Livni: “We must not enable the left to renew attempts to make concessions in the heart of the Land of Israel — in Judea and Samaria.”

So what, then, will Netanyahu talk about with his American hosts now that the Iranian threat seems to be seeping between his fingers and the two-state solution handed over to the left wing by himself and his friends? Not to worry, he’ll get over it. In July 2001, two years after losing power, Netanyahu was recorded telling a grieving family of settlers, “I know all about America. America is something that can easily be moved. Moved in the right direction … So they say something. So what.” He boasted, “I was not afraid to confront [President Bill] Clinton. I was not afraid to confront the UN. In any case, I pay the price, so I may as well get something out of it. A bang for my buck.”

Since then, Netanyahu has not been afraid to confront President Barack Obama either, and he has gotten the most for his money at the ballot box, twice. All signs indicate that Netanyahu will be handsomely rewarded again at the ballot box in the upcoming elections for his congressional speech. Indications are that it is the Israeli public that will keep paying the price — the price of keeping Netanyahu living in the premier's residence on Jerusalem’s Balfour Street and in his private Caesarea villa.

What about the contradictions and the lies? Late Prime Minister Yitzhak Shamir once said, “For the Land of Israel, lying is allowed.” If indeed that is so, it goes without saying that one is allowed to change his or her mind for such an end. We are but left with the hope that on March 3, Netanyahu will decide to update the American representatives as well as his own Israeli public about his change of mind.