The Iranian gap between Obama, Bibi

The perception gap between President Barack Obama and Prime Minister Benjamin Netanyahu on the Iranian agreement extends beyond negotiation tactics, with Obama aspiring to rehabilitate relations with Iran. 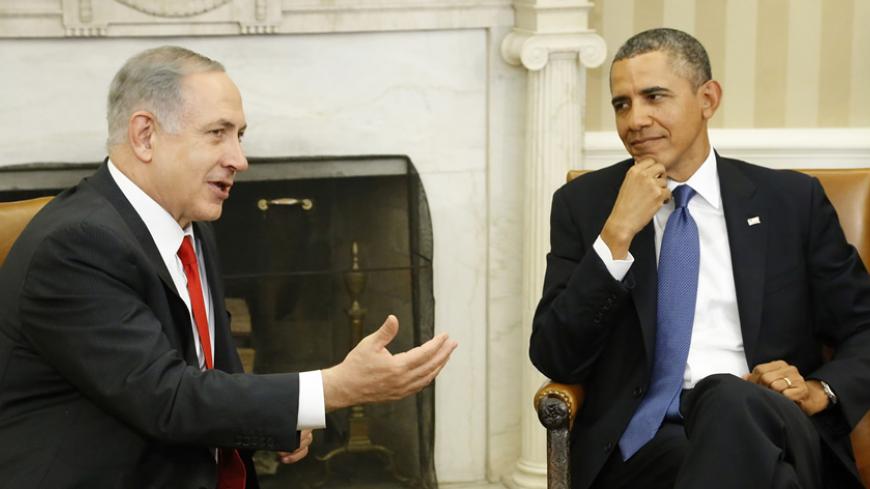 The US and Israeli governments were probably never as distanced from each other in regard to policy as they are now. The gap between them is not only about how to deal with the Iranian negotiations, but more profoundly as to the use of power versus diplomacy. A source from the Israeli prime minister's office spoke to Al-Monitor on condition of anonymity about Prime Minister Benjamin Netanyahu's considerations when deciding to speak to Congress on March 3, despite US President Barack Obama's objection. According to the source, the prime minister never believed in the desirability of an agreement — he sees Iran as the ultimate evil, determined to destroy Israel with nuclear weapons.

Generally speaking, Netanyahu is not a great believer in international accords. This is particularly true when it comes to possible agreements with the Arab and Muslim worlds — agreements he sees as Munich appeasement agreements of sorts, i.e., failed attempts to appease the enemy. He believes that the other side will always concede once an agreement is reached and, in reality, understands only the language of force. From the onset, Netanyahu would have probably preferred using force against Iran, yet hesitated to initiate an attack himself, following the advice of the security establishment. The better alternative, in his eyes, would be for the United States to attack Iran. This is the reason he is disappointed with Obama, whom he seemingly perceives as a left-wing liberal appeaser.

This reasoning on Iran can construe the philosophical world out of which Netanyahu is operating: a total mistrust of anybody who is hostile to Israel or even not fully in agreement with him. He therefore prefers not only no agreement to a bad agreement, but also no agreement to a good agreement. Netanyahu simply does not trust agreements altogether.

Furthermore, the Congress fiasco demonstrates that Netanyahu has a great belief in the power of words, rhetoric and demagogy. Not unlike other right-wing regimes. On that level, there is an abyss between him and Obama, not to speak of the European Union and the Arab world.

A source in the State Department told Al-Monitor that indeed there is an ideology-perception gap between the US president and the Israeli prime minister on the Iranian issue, which extends beyond tactical considerations concerning the management of negotiations. Obama believes in the importance of an agreement, not only for curbing Iran’s nuclear military capability but also out of a longer-term view of a possible rapprochement with the Iranians.

Obama feels that with the strengthening of pragmatic forces in the country, such a rapprochement might be envisaged. He has instructed Secretary of State John Kerry to take a tough line on the agreement, while respecting Iran’s need to save face. In the US administration’s view, the enemy of a good agreement is a perfect agreement. Meaning that Western (or Israeli) ambitions to reach a perfect agreement risk further humiliating the Iranian regime, resulting in no agreement at all.

Furthermore, the US administration considers maintaining the five permanent members of the UN Security Council plus Germany (P5+1) alliance intact important, not only for current negotiations but also in a future perspective. The US administration is already looking one step beyond the nuclear agreement, toward a possible development or rehabilitation of Western relations with Iran and the possible resolution of other regional conflicts.

Obama’s philosophical world view of international relations is based on coalition-building and compromises, with the use of force as a last resort. A whole set of contradictory perceptions separates the world views of Netanyahu and Obama.

This political and philosophical abyss renders the construction of a common language between the two leaders impossible. This gap also reflects an ever more profound difference between the value systems that each of the two leaders adhere to. Obama is a profound believer in equality — between people, but also between nations including their right of self-determination and the determination of their policies. Netanyahu is a man of hierarchies — it is the force that counts, the force that dictates. These are the underlying reasons for the repetitive crises in US-Israel relations.

One can therefore conclude that the current crisis concerning Netanyahu’s speech to Congress is just the tip of the iceberg.