Prime Minister Benjamin Netanyahu's unequivocal rejection of the Iranian deal reflects his rejection of President Barack Obama's liberal doctrine, which embraces a strategy of diplomatic solutions to conflicts in cooperation with US partners. 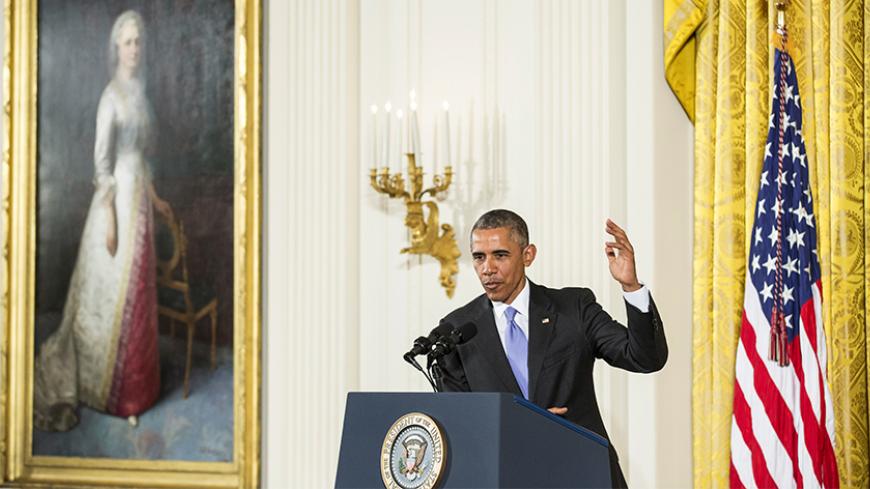 US President Barack Obama speaks during a news conference about the recent nuclear deal reached with Iran in the East Room of the White House in Washington, July 15, 2015. - REUTERS/Joshua Roberts

The congressional debate over the Iran agreement is one of the most crucial debates in recent American history. At stake here is not only the Vienna agreement, but mainly US international posture. It could even touch upon its identity as a liberal country.

A senior source at the State Department told Al-Monitor on condition of anonymity that the administration will leave no stone unturned in convincing Congress to approve the agreement. “The White House will reach out to every single member of Congress. We have no doubt that the agreement will pass, possibly with a presidential veto. The credibility of our Middle Eastern policy is at stake, as well as our credibility vis-a-vis our global partners of the P5+1 [five permanent member of the UN Security Council plus Germany].” He added that the agreement met the target set by President Barack Obama and Secretary of State John Kerry: ensuring that Iran will not develop nuclear weapons at least in the next 15 years and keeping the Iranians from feeling humiliated. The negotiations, according to the source, reached a win-win balance, offering the best possible conditions to assure the sustainability of the agreement. The senior State Department source made it clear that the Vienna agreement is part of a larger Obama foreign policy doctrine.

This agreement fits the ideological guidelines of Obama’s foreign policy, where diplomacy comes first and the war option comes last. He places great value on America’s economic, technological and academic assets. Thus, Obama attempts to adapt US policies to a changing international ecosystem, in which wars are no longer winnable, as witnessed by the Iraq and Afghanistan wars. Clear-cut victories are a past concept, while wars in our era often provoke lasting instability and insecurity and even more conflicts.

Collective diplomacy is at the heart of this foreign policy doctrine. The US administration considers collective sanctions, the P5+1 collective negotiation structure and collective agreements as keys to international success. Obama’s America listens to the European Union (EU) and even to Russia and China.

This is a fundamental transformation of US foreign policy compared to the days of Presidents Ronald Reagan and George W. Bush, when the United States played the role of the global policeman. Obama’s administration is attentive to the minds and hearts of the American people, who mostly reject any US military intervention on the ground. The Obama doctrine reflects a more liberal United States that embraces a strategy of peaceful solutions to conflicts in full cooperation with its partners.

It is, therefore, not only the nuclear agreement, but Obama’s vision of America that is brought to a vote in a Republican-dominated Congress that aspires for a more conservative and more forceful United States. One can presume that in the 60 days allocated for debating the agreement, it will pass congressional scrutiny, most probably with a presidential veto.

The State Department source estimated that following this congressional stage, the US administration will monitor the implementation of the agreement in coordination with the P5+1. He believes that throughout the implementation stage, Kerry will maintain low-profile contacts with Iranian Foreign Minister Mohammad Javad Zarif.

Throughout the negotiations, we witnessed a conceptual rapprochement between the United States and the EU concerning their respective interests and their visions of conflict resolution.

While Europe, Russia and China view the Vienna agreement as a positive historical watershed, a significant part of the Arab World, especially the Gulf countries, is greatly worried. Most Arab leaders greeted the agreement with a very lukewarm consent.

These countries, especially Saudi Arabia, fear the regional strengthening of Iran in Syria, Iraq and Yemen. Obama declared that his administration is reaching out to the Gulf countries as part of the dialogue that was launched in Camp David last May. The administration aims to reassure Egypt, Jordan, Saudi Arabia and other Gulf countries that it will stand by them in the battle against increased regional terror activities (supported and financed by Iran). But the aforementioned unenthusiastic reactions to the Iran agreement indicate that those Arab leaders are not yet completely convinced.

That is not the case in Israel. Prime Minister Benjamin Netanyahu came out unhesitatingly and in full force against the agreement that he defined as a mistake of historical magnitude; one that risks the security of Israel and the Western world. This view contrasts with the analyses of some of Israel’s foremost nuclear and security experts, such as Uzi Eilam, former head of the Israeli Atomic Energy Commission. Eilam stated in an interview with Israel’s Public Radio on July 15 that the agreement delays Iran’s nuclear program by at least 10 years.

According to a source close to Netanyahu, the prime minister will engage forcefully in the congressional battle over the nuclear agreement. He is currently reaching out to the more right-leaning Jewish American organizations, such as the Conference of Presidents of Major American Jewish Organizations and the American Israel Public Affairs Committee, in search of support. Netanyahu distrusts Obama and sees him as a naive leader whose heart is closer to the Arabs than to Israel. He is, therefore, delaying his decision whether to accept Obama’s offer for a security compensation package until after the congressional debate.

Clearly, Israel comes out as the loser of this dramatic development. Its relationship with the US administration has suffered a severe, irreversible blow, which will surely last for quite a while. Due to the agreement and Netanyahu’s response, Jerusalem is currently more isolated internationally than ever before. This grave situation in which Israel finds itself now could escalate into a catastrophe should Netanyahu and the Republicans defeat the agreement in Congress.