One man's return to Gaza

In an interview with Al-Monitor, the journalist Majdi Arbid, who fled Gaza eight years ago, tells of the dire situation he encountered when he returned. 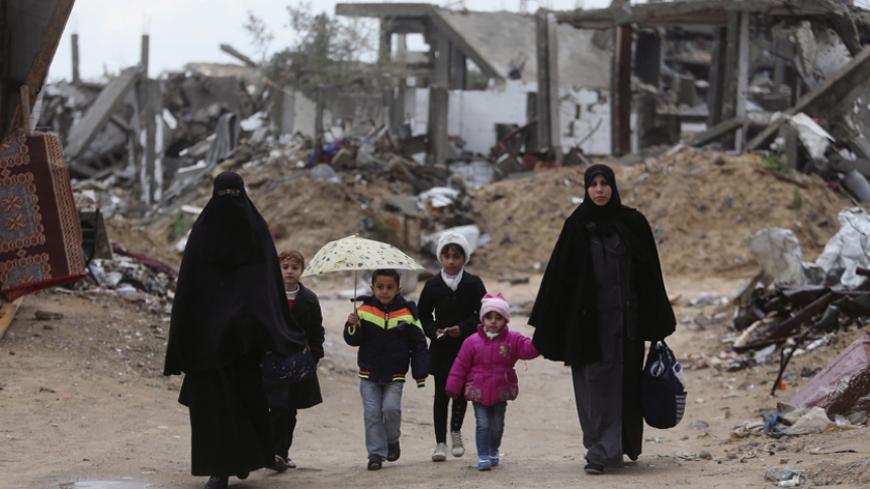 Palestinians walk near the ruins of houses that witnesses said were destroyed or damaged by Israeli shelling during a 50-day war last summer, on a winter day east of Gaza City, Feb. 20, 2015. - REUTERS/Ibraheem Abu Mustafa

That the situation in Gaza is serious is a well-known, indisputable fact. The leitmotif of countless reports is the plight, poverty, anxiety and suffering of the people. The testimony I’ve heard from my friend Majdi Arbid, who returned to the Gaza Strip after an eight-year absence, is especially unique and heartrending.

Majdi was the photographer I worked with when I covered Gaza during the second intifada, 2000-2005. Back then, he was also the owner of the al-Huriyah (Freedom) radio station, which employed dozens of people broadcasting news, current affairs and entertainment programs. We used to crisscross the Gaza Strip together until Majdi was forced to flee by the skin of his teeth during the 2006 Hamas coup, because his radio station was airing messages against the movement’s policies.

Two weeks ago, Majdi's father passed away. Despite having serious hesitation, he asked to return to Gaza to attend the funeral. Even now, several days after having returned to his new home in Ramallah, his voice is faint. Haunted, he can’t sleep a wink. Majdi is unable to shake the images of his family, friends and neighbors who have been scarred physically and emotionally by poverty and wars. According to him, they’ve become different people, a shadow of themselves. Seeing them face to face, it seems, was far more powerful than any newscast he had seen.

The following are verbatim observations Majdi conveyed to me by phone. This is Gaza today from the perspective of a man who fled from it eight years ago and who is horrified by what he saw upon his return.

“From the moment I passed through the Erez crossing,” he tells Al-Monitor, “I felt that I had travelled 100 years back in time. I arrived at the cemetery, where many people had come to bid my father a last farewell. The cemeteries are crammed. There’s no more room to bury the dead. My father was laid to rest in a plot where his father had been buried. We had to share them also in death. My father was buried on top of his father. I didn’t recognize my friends who came to console me. Many had grown long beards and their bodies had become gaunt. They’re skinny because they’re hungry. Little by little, they began telling me about their lives after I had left. What blew my mind the most was the fact that many of them, young and old alike — friends, family and neighbors — regularly take Tramal (aka Tramadol) pills that are usually administered after surgery and for severe pain.

“There was a time when these pills were smuggled from Egypt and were cheap,” Majdi relates. “People started taking them to relieve their emotional pain and anxiety. Now the smuggling has stopped and the price of these pills has skyrocketed. But some people are really hooked on them. It helps them to forget their cares.

“People don’t have a dime to their name. Some of my friends who used to work with me at the radio station begged me to give them a cigarette or buy them a pack. Sometimes they would overcome their shyness, asking me for the change I had in my pocket. This is how intense the poverty is.”

All of Majdi’s old friends had come to console him except for “D,” the person who ran the station’s news desk. His wife, who paid her respects at the mourners tent, said that he had been arrested. Recently, after several years of unemployment, he had found a job cleaning offices and because of the hardships, he stole a couple of things from his workplace.

“The distress took the better part of his judgment,” Majdi said. “He has two kids and wanted to put some food on their table. You can’t judge him for that. Who would have thought that such a gifted person who was always energetic and a loyal employee would even contemplate stealing?”

After a long pause, he continued: “Everybody was emaciated. Their teeth had either darkened or fallen out. I wasn’t shy and asked them, ‘What happened to your teeth?’ I understand why they’re so skinny, but what’s the issue with the teeth? As it turns out, they have no money to buy toothpaste. That’s the last thing they will spend money on. They would rather buy those Tramal pills than look after their teeth. But one of the side effects of taking so many pills is that they lose their teeth.

“In Gaza, some 50,000 people get their paycheck from the Palestinian Authority and about 70,000 more get their paycheck from Hamas. They face the heavy burden of providing for an extended family from a meager salary of $500 a month or even less. The rest live off of UNRWA [United Nations Relief and Works Agency], the basic food delivery and occasionally $100 donations that are given to each family.

“Even people I knew at the time, who used to make a decent living, are now in a hurry to marry off their daughters at a very young age, 14 or 15 years old, so they have one less mouth to feed, and maybe get a small dowry that will help provide for the rest of the family.

“I looked at my brothers. One of them used to be a prosperous greengrocer. The other was a sought-after construction professional. I had no idea how I could help them. What could I give them to pry a little smile out of them? It’s not that I didn’t know that they were doing poorly, but nothing compares to seeing it with your own eyes. Everybody’s eyes were so sad and so desperate. There’s no hope and no prospects. That’s what’s driving them mad.

“I asked them, ‘How did you go on with your life all these years, with no money or prospect?’ The answer I received from all of them was, ‘It's difficult to grasp, but one gets used to it. You get used to living on nothing.’

"What was amazing was that I walked around the markets and everything could be had. There’s no shortage of food or clothes, but people have no money to buy anything. There’s only one caste that has made money. Those are the people in Gaza called the ‘war and tunnel merchants.’ Left with no choice, young people are forced to join the ‘muqawamah’ (resistance). That’s their only way to find a job and provide for their family.

“But what is most conspicuous perhaps is that people are becoming ultra-religious and pious. Suddenly I saw things I had never seen in Gaza before. People are wearing Afghan clothes [kaftans or overdresses], long jalabiyas that are worn over the pants. Quite a few people in Gaza have embraced the Salafist worldview. Some have grown long beards, like Islamic State members. I’m talking about people who used to be my friends and were far away from these ideas. But the situation and the despair drove them there. It started from the fact that people realized that Hamas was the ruler and that they had to go to the mosque. And then they thought that if they were part of the regular circle of worshipers, they would get a subsistence aid basket from Hamas, because there is no other form of aid. There, at the mosques, those young people picked up all kinds of radical ideas from Hamas.”

In Majdi’s opinion, this phenomenon will only gather momentum as long as the dire economic situation in Gaza persists. “They are like dead people walking,” he said. “One point 8 million people are desperate and angry. That should concern you Israelis, too.”