The Palestinian Center for Human Rights reports that violations of the truce continue, with Israeli forces still firing across the border, hitting civilians and houses and making the entire area unlivable. 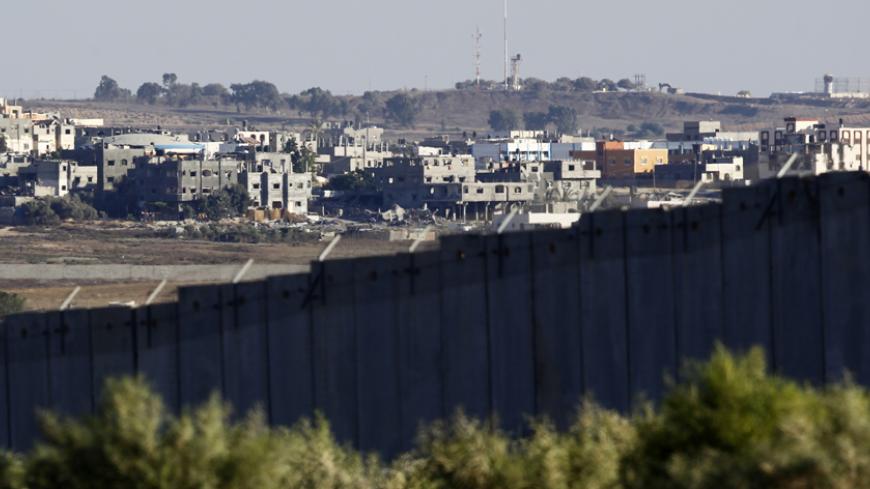 A view of the northern Gaza Strip as seen from the Israeli farming community of Netiv Haasara, Sept. 2, 2014. - REUTERS/Amir Cohen

KHAN YUNIS, Gaza Strip — The Israeli army has broken the peace many times in the six months since the end of the last war on the Gaza Strip, which ended with the signing of truce by Palestinian President Mahmoud Abbas on Aug. 26, 2014.

Al-Monitor reviewed the weekly reports issued by the Palestinian Center for Human Rights from the end of the war up until Feb. 18. The study listed many Israeli violations, among them that occupation forces shot and killed Fadel Halaweh in the border region east of Jabalia as he was hunting birds Nov. 26 and a drone targeted and killed a resistance fighter east of Khan Yunis Dec. 24. Israeli forces also wounded 40 civilians in various areas along the border between Israel and the Gaza Strip, among them one resistance fighter and five fishermen at sea.

The occupation forces also arrested 66 civilians, including 30 who were apprehended as they tried to cross the border that separates the Gaza Strip from Israel. Another 35 fishermen were arrested at sea, most of them subsequently released. The forces also destroyed nine boats, conducted three air raids against resistance positions and breached the border on eight separate occasions in many locations, penetrating as far as 200 meters (656 feet).

Although the center does not have access to official statistics, it noted that the pace of those violations gradually increased, beginning in September, to reach their apogee in November and subside in intensity last week.

Activist Hamdi Shaqqura with the Palestinian Center for Human Rights told Al-Monitor that “35% of Gaza’s agricultural land along the border region was inaccessible to farmers as a result of constant gunfire by Israeli occupation forces.”

He said that six months after the end of the war, Israel has completely failed to abide by the truce agreement, not allowing fishermen free access to the sea out to a distance of six nautical miles, not permitting reconstruction and failing to lift the blockade.

The Al-Snati region east of Khan Yunis, in the south of Gaza, is considered the most prone to violations, due to its location a few hundred meters from the boundary with Israel.

Al-Monitor visited the area Feb. 19 and noted that its few houses were abandoned, having been destroyed by heavy artillery shelling during the last war. There was no evidence of chickens in the poultry farms, except for old feathers strewn about.

In front of one of those partially destroyed houses, Azmi Shahdeh stopped his motorcycle to tell Al-Monitor, “I come here on a daily basis to check up on my house, only to discover that, in addition to the destruction inflicted during the war, there are new bullet holes, especially in the water tanks and walls facing the border.”

At the rear entrance of the house, green fields extend as far as the eye can see, dominated by four Israeli observation towers. It's an area that locals call the "military dead zone."

Shahdeh said, “There is no electricity nor security here. My four children shudder at the thought of returning home, and we are currently renting a house very far from the area.”

Al-Monitor went by car to the village of Khezaa, close to al-Snati, and headed toward the last house in the village. Between it and the border fence, 500 meters (1,640 feet) away, stood a huge white tent. Locals said that it was used by the "sentry" — resistance fighters who watch for a possible invasion and monitor the movement of occupation vehicles. The truce in Khezaa seems to remain in place between the two factions.

The family that owns the last house in the village live in absolute horror. The mother, Maha Najjar, said, “I have four young daughters and four sons. Not a day goes by, particularly at night, that we don’t hear heavy gunfire and bullets whizzing through the nylon canopy around the house, leading us all to hide under the house’s only cement roof.”

The family’s house is beyond description. The roof and walls were destroyed in the last war, leaving a single standing half-demolished section of roof, under which everyone took refuge when the gunfire intensified. The rest of the house is constructed of nylon that protects its inhabitants from the winter rains.

The head of the household, Abu Nidal Najjar, constantly replaces and repairs the nylon. He said, “This is our only home. We have nowhere else to go. We rented a house for two months, but we are no longer able to afford the $200-a-month rent so we came back here.”

In addition to the heavy daily gunfire, the family members complain about the terrifying police dogs that they say come from the border to roam around the house.

Shaqqura told Al-Monitor that the violations of the truce have not been limited to arrests and gunfire along the border, but also include the blockade. This is considered part of the collective punishment policy that violates international laws and conventions, a policy that disallows reconstruction and imposes UN envoy Robert Serry's plan, which the center strongly condemns and considers a way to maintain and give international legitimacy to the blockade. As UN special peace envoy for the Middle East, Serry announced Dec. 16 that the United Nations, Israel and the Palestinian Authority reached an agreement allowing the start of the Gaza reconstruction under international monitoring.

Shaqqura added, “Gaza is living through the worst time in its history, not only as compared with previous years.”

The spokesperson for Hamas, Sami Abu Zuhri, told Al-Monitor, “Israeli violations are many and ongoing." He explained that Hamas was "keeping the Egyptians abreast of those violations, so that they may shoulder their responsibilities in this regard.” He added, “Intervention is also required on the part of the international community if the latter wants calm to be maintained in Gaza.”

He pointed out that in the last war, the occupation forces tried and failed to deter Gaza, and were themselves deterred instead. Furthermore, the resistance forces maintained full readiness to repel any new aggression on the part of the occupation.

No one knows what the coming six months will hold, how far Israeli violations will go and which border-dwelling family will come under the fire of Israeli forces, for all that anyone can do is watch in apprehension.