Military preparations by Israel and Hamas in the Gaza Strip are raising speculation that a new war is on the way. 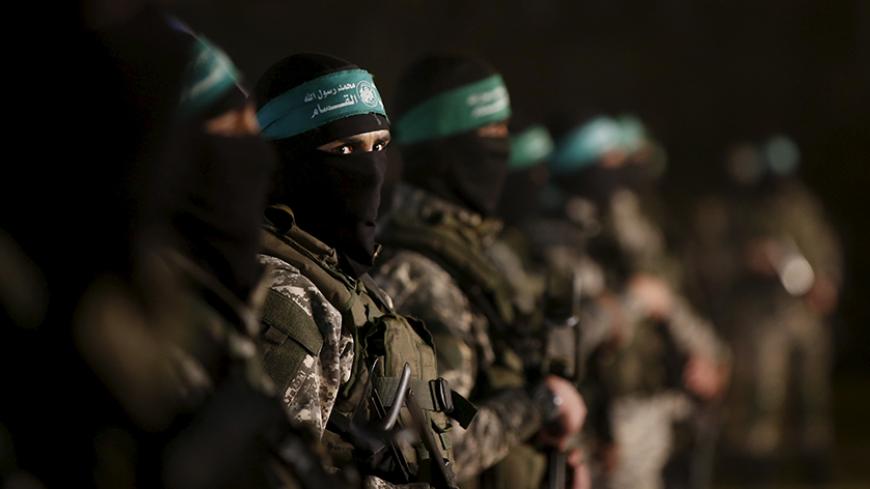 Palestinian Hamas militants stand guard during a rally in memory of their seven comrades who were killed when a tunnel collapsed close to the Gaza Strip's eastern border with Israel, Jan. 31, 2016. - REUTERS/Mohammed Salem

GAZA CITY, Gaza Strip — Palestinians are increasingly concerned about new confrontations in the Gaza Strip between Hamas and Israel.

On Jan. 13, Israel shelled a group of Palestinians near the border fence in northern Gaza for allegedly attempting to plant explosive devices. The shelling broke a truce agreement that had been in place under Egyptian auspices since August 2014.

A week later, on Jan. 21, Israeli forces deployed heavy artillery batteries on the northern border with the Gaza Strip.

Gazans are in a state of despair and frustration in light of the poor economic situation and the disruption of the truce that ended the 2014 Israeli war on Gaza. Meanwhile, Hamas is saying that Gaza may flare up again. Ismail al-Ashqar, Hamas leader and chairman of the Palestinian Legislative Council's Security Committee, said in a press statement back in August that an explosion would be imminent if Israel did not abide by the truce agreements.

He added, “The resistance has more weapons than Israel anticipates.”

Political analyst Hassan Abdo said Israel’s deployment of heavy artillery batteries on the border with Gaza “is a serious sign of the tense conditions and has alerted the resistance to any [potential] sudden Israeli aggression.”

Abdo told Al-Monitor that both the resistance and Israel feel that the 51-day war in 2014 was cut short and did not produce meaningful results. “The resistance feels that it did not achieve its goals, most notably ending the Gaza blockade. And Israel feels it did not weaken the capabilities of the resistance, especially the military tunnels. This is raising the chances that a new confrontation could break out.”

Political analyst Eyad al-Qara told Al-Monitor, “There are two main indicators that a new confrontation between Israel and Hamas may soon break out. The first is that, one year after the 2014 war, Israel has become bolder in targeting Palestinians, by continuously shooting at farmers on the eastern border of the Gaza Strip and by targeting fishermen near the Gazan coast. The second indicator is that the resistance is continuing its military preparations for the next confrontation.”

The most recent shooting on farmers took place Jan. 31. Local news website Donia al-Watan reported that Israeli soldiers positioned in Israeli towers along the eastern borders of Gaza shot at a group of farmers along the borders east of Khan Yunis and Rafah. The farmers escaped without injury.

Qara said ongoing Israeli violations against Gaza show Israel is not interested in maintaining calm. He stressed that the failure to resume the truce talks is due to the rift between Egypt and Hamas and has “made the resistance feel that it made a mistake by agreeing to postpone the truce discussion without specifying a [resumption] date.”

Political analyst Talal Okal agreed with Qara that Israel’s noncommitment to the truce will accelerate the outbreak of a new confrontation with Hamas. “The failure to implement the terms of the truce by Israel, most importantly the easing of the Gaza blockade and the opening of border crossings for the passage of goods, has contributed to the continued deterioration of the economic situation in Gaza, and this is pushing toward a new military confrontation,” Okal said.

He added, “Things are getting worse. When the war ended, people expected that the reconstruction of Gaza would be fast and that the unemployment problem — which is the worst in world — would be tackled. But this did not happen.”

According to a World Bank report from March 21, the unemployment rate in the Gaza Strip is the highest in the world, as it reached 43% at the end of 2014.

Hamas spokesman Ismail Radwan did not rule out that Israel may launch a new attack on Gaza, saying that the deployment of heavy artillery on the Gaza border reflects “Israel’s failure to deal with the current Palestinian uprising in the West Bank and Jerusalem and is a serious threat [that could] spread the battle of the West Bank to the Gaza Strip.”

Radwan told Al-Monitor, “Israel wants to divert the world’s attention from the uprising in Jerusalem and justify an upcoming aggression on Gaza by drawing attention to the resistance preparation in Gaza and exaggerating its danger.”

The Israeli media recently focused on Hamas’ growing capabilities and its quest to rebuild the tunnels to prepare for the next war. Such talk has increased since the seven Izz ad-Din al-Qassam Brigades members died in a Jan. 28 collapse of a military tunnel north of Gaza as they worked to restore it.

Military analyst Amos Harel wrote in a report published Jan. 31 on Haaretz, “It seems there is a race against time. Hamas wants to continue its preparations to be ready, while Israel is trying to find attack tunnels on its lands under the pretext that Hamas might use them soon.”

Radwan warned Israel against “embarking on a new folly in Gaza."

“We say to the occupation, which has failed in all its wars on Gaza, that it should not try to go through the experience again," Radwan said. "But if it decides to, then we are ready to face it. And we will surprise it.”

Hamas continues to dig military tunnels on the border with Israel to be ready for a future confrontation. In a Jan. 29 speech during the funeral of the seven al-Qassam Brigades members, the deputy head of Hamas’ political bureau, Ismail Haniyeh, said, “The resistance will continue its preparations for a confrontation with the occupation by continuing its land and sea military preparations and by continuing to dig tunnels and develop its missiles.”

“If we are attacked through these tunnels, we will respond harder than we did" during the war on Gaza in 2014, he said.

During the July-August 2014 Israeli aggression on Gaza, the Israeli forces launched more than 60,660 land, sea and air raids, during which 2,147 Palestinians died, including 530 children. Around 17,130 houses were destroyed partially, while 2,465 houses were completely damaged, according to a report from the Euro-Mediterranean Human Rights Monitor published early November 2014.

Qara said, “I think that Hamas does not want war. But the warnings and threats being exchanged between Hamas and Israel are back, and they are bringing back the war atmosphere to the region.”

He also noted Netanyahu's recent threats are very similar to those the Israeli leader made in January 2014, six months before the 2014 war: “If Hamas forgot the lesson, we will teach them the lesson soon, and in a hard way.”

The Palestinians, who are still suffering the effects of the previous war, hope that the mutual threats and warnings are just a passing cloud. But their fears of an outbreak of war are increasing because no peace talks between Hamas and Israel are underway.