Has the countdown to next Hamas-Israel war begun?

Both Israel and Hamas claim not to want another battle, but both are loudly preparing for one. 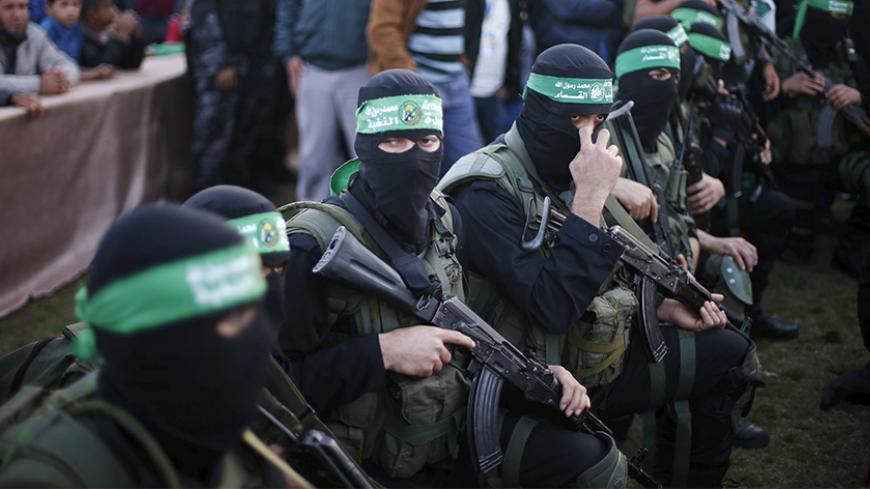 Israel and Hamas have been escalating their war of words, which observers on both sides fear could turn into violence.

Gaza has yet to recover from the destruction of the last war with Israel in the summer of 2014, when more than 178,000 houses were destroyed or damaged, which makes any upcoming war between Israel and the Palestinians seem too early and premature.

After a flurry of contentious statements in February, the situation calmed in March as both Hamas and Israel stopped talking about a possible fourth Israeli-Gaza war, and both showed a desire to quiet their people and reassure them that no confrontation would break out anytime soon.

But on April 14, an anonymous senior Israeli officer made an unprecedented statement about Israel Defense Forces (IDF) plans for the next potential military confrontation with Hamas in Gaza. Israeli media reported that the official was a prominent source from the IDF leadership in the southern area.

The Israeli plan for a potential war against Hamas in Gaza received wide media coverage in the Palestinian and Israeli press. It calls for each Israeli battalion to kill as many Hamas members as possible and thwart the movement’s moves and goals. The IDF has developed a strong defense and attack system capable of protecting the Gaza envelope and minimizing the threat of mortar shells, while the Israeli air force would launch an extraordinary and efficient offensive.

Abu Mujahid, a spokesman for the Popular Resistance Committees, told Al-Monitor, “The resistance in Gaza is preparing itself for the worst in its upcoming confrontation with the Israeli army. We take the IDF threats to launch a new war against Gaza very seriously. We have growing speculations that the Israeli enemy has begun the countdown for a new aggression against Gaza, and the resistance is getting prepared around the clock in order not to give the Israeli army a chance to launch a sudden attack.”

Israel announced April 18 that it had discovered a new tunnel east of Rafah in the southern Gaza Strip, noting that the tunnel is 2 kilometers (1.24 miles) long, 30 meters (almost 100 feet) deep and extends inside Israel.

On the same day, Izz ad-Din al-Qassam Brigades, Hamas' military wing, issued a statement saying Israel’s supposed "discovery" was designed to distract the public's attention away from criticism targeting Israeli leaders for stalling the process of eliminating the Gaza tunnels and as a way to reassure the Israeli settlers in the Gaza envelope.

Then Hamas noted that it has more in store for Israel than a tunnel. On the same day as well, al-Qassam Brigades revealed for the first time its “R 160” missile, which has a range of 160 kilometers (100 miles), meaning it could reach Haifa.

Yousef Rizqa, former Hamas minister of information and a political adviser to Ismail Haniyeh, the deputy head of Hamas’ political bureau, told Al-Monitor, “Israel’s announcement of discovering the tunnel aims at reassuring the Israeli population that the government is making great efforts to maintain the security of the settlers, confront Hamas and gain international support for Israel, by illustrating the offensive cross-border tunnels as a threat posed by Hamas.

"The more Israel increases its calls to seek out support, the more the expectations for a future war against Gaza increase. Although the resistance in Gaza does not call for a new war and does not want to carry out attacks to break the truce, it has the right to prepare itself on the field, despite the lack of military balance between the resistance and Israel.”

In conjunction with all these security developments, both sides carried out field maneuvers.

On April 18, the Israeli army launched large-scale military maneuvers in the Golan Heights and the Jordan Valley that included field forces and aircraft. Even before that, on April 10, the Israeli army had its largest military training since the 2014 war in Gaza, with the participation of thousands of soldiers, near the Gaza border to simulate the incursion of Hamas inside Israeli settlements and the detention of Israeli hostages.

On April 19, the Ministry of Interior and National Security in Gaza ended the fifth maneuver of its security services, which it had started in Gaza during recent weeks. The maneuver included evacuating all headquarters and increasing security apparatuses, while explosions and weapons firing were heard. Ambulances, civil defense vehicles and the police practiced their movements in a drill that resembled the outbreak of a new war with Israel.

Meanwhile, retired Palestinian Maj. Gen. Wassef Erekat told Al-Monitor, “Decision-makers within the resistance leadership in Gaza must be alert of the possibility of Israel launching a [surprise] attack, as it did in the three previous wars in 2008, 2012 and 2014, since the Israeli government is known for being extreme and risk-taking. Perhaps [the Israeli army] is being pressured by the Israeli public to carry out a bloody military operation against Gaza, despite the misleading statements about not wanting this war.”

Remarkably enough, Israeli Housing Minister Yoav Galant called April 18 for the Israeli army to prepare for a wide-scale confrontation with Hamas in Gaza by the beginning of summer. Perhaps this call seems dangerous because Galant is a former IDF commander and military general who led the war on Gaza in 2014 and is also a member of Israel’s political-security Cabinet.

A Palestinian security official in Gaza told Al-Monitor on condition of anonymity, "Hamas’ and Israel’s declaration of their unwillingness to go into a military confrontation anytime soon might face three factors that may eventually lead to an outbreak of this confrontation. The first is the misunderstanding from both parties due to their field efforts on the Gaza-Israel borders; the second is the increased escalation in the West Bank, most recently the operation in Jerusalem on April 18, which wounded 20 Israelis; and the third is the resistance in Gaza feeling that the blockade is tightening with no alleviation initiatives in sight.”

Meanwhile on April 23, Hamas warned about the continued tightening of the Israeli blockade on Gaza and called regional and international parties to shoulder their responsibilities in the deteriorating situation.

Despite the growing mutual warnings between Hamas and Israel about an imminent confrontation, a number of factors might prevent its outbreak, at least for now. The Israeli army is preoccupied with the growing unrest in the West Bank that began in October. Also, Israelis seem to doubt how much the IDF could actually achieve in Gaza — in terms of completely eliminating the Palestinian factions’ missiles and toppling Hamas — except for killing and wounding thousands of Palestinians. The Israelis must wonder whether it is worth getting pulled back into the Gaza quagmire.