There has been a lot of talk lately about Israel launching one last war against Hamas in the Gaza Strip to annihilate the group, and Hamas is preparing for this possibility. 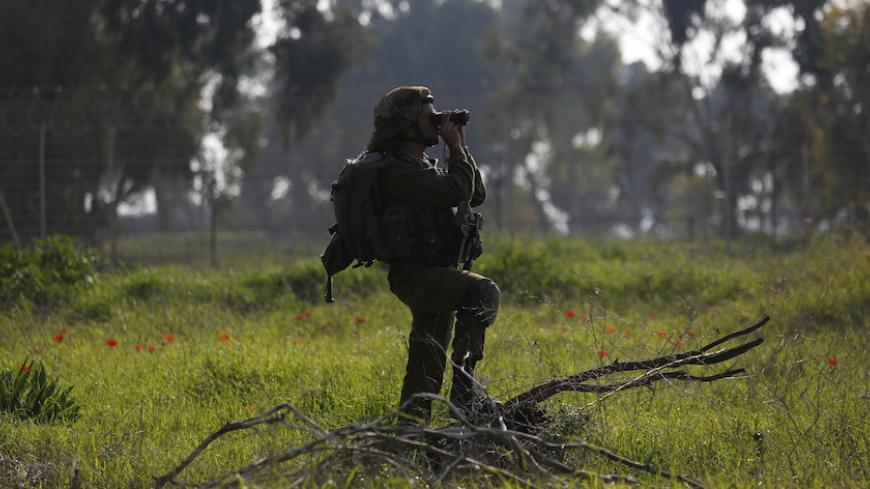 An Israeli soldier uses his binoculars as he looks toward the northern part of the Israeli Gaza border in southern Israel, Jan. 13, 2016. - REUTERS/Amir Cohen

There are rumblings that Israel is threatening a war to end all wars against Hamas, one comparable to World War II.

It has been two years since the last Israeli war on the Gaza Strip. As both sides mark the occasion, Israeli politicians have made several official statements and military experts have published press analyses indicating that an upcoming military confrontation with Hamas is not only inevitable, but will completely eliminate Hamas.

Hamas, on the other hand, claims the threats are mostly bluster, but says it is ready for whatever comes its way.

The clamor began to rise in June.

An Israeli military source close to Defense Minister Avigdor Liberman threatened June 15 that the upcoming war will banish Hamas' rule in Gaza and will be the last one against the movement. Israel cannot keep engaging in endless wars of attrition year in, year out. Therefore, the next confrontation will be terminal, whether it happens sooner or later, the source said.

Gen. Kobi Barak, the head of the Technological and Logistics Directorate in the Israel Defense Forces (IDF), noted June 30 that the upcoming war on the Gaza Strip will be fierce. He compared it to World War II because Israel will be under intense shelling, and the Palestinians will launch anti-tank missiles and infiltrate Israeli settlements on Gaza’s outskirts.

On Aug. 10, Yohay Awfar, a military expert at the Israeli NRG news website, said the calm along Gaza’s borders indicates Hamas is still practicing deterrence, as it has since the 2014 war. Israel continues to improve its fighting system and it will subdue Hamas one last time, he said.

Retired Palestinian Maj. Gen. Wasef Erekat told Al-Monitor, “The Israeli command we are up against is declaring a possible violent war on Gaza. The real challenge for Tel Aviv consists of the potential risks of this scenario due to its destructive aspect. Any damage that Israel causes will not only affect Gaza, [because] Palestinians have military capacities that might cause similar damage in Israeli cities, even if relatively less.

"Although Israel has lethal powers and bombs that can target Gaza’s buildings, streets, infrastructure and power stations, I believe that it will just maintain its 'mowing the lawn' policies [a phrase meaning to clean the land of its people] with the Palestinian resistance in Gaza every other year without engaging in a full-on war.”

Israel's statements against Hamas were not restricted to the media. In recent weeks, the IDF has engaged in field trainings mimicking military scenarios in a possible upcoming war on Gaza. The Israeli navy conducted a maneuver Aug. 13 in the Mediterranean Sea to simulate a naval attack from Gaza or Lebanon on an Israeli ship. Armed Palestinian factions pose an increasing risk to the Israeli fleet on its southern front in Gaza. Israeli naval ships have become a top target for Hamas.

Indeed, Ahmad Bahar, the Hamas leader and deputy speaker of the Palestinian Legislative Council, had announced in early April that the naval force of Izz ad-Din al-Qassam Brigades, Hamas’ military wing, will change the situation for the Israeli army in the upcoming war. He also praised this force and its readiness to engage in new battles with the Israeli army.

Also, an Israeli unit carried out a training exercise Aug. 15 against a hypothetical situation in which a Palestinian cell consisting of 20 armed men from Gaza infiltrates Israeli settlements adjacent to the Gaza Strip through border tunnels between Gaza and Israel.

Official Hamas spokesman Sami Abu Zuhri told Al-Monitor, “The consecutive Israeli threats against Gaza claiming that the upcoming war will be the last are mere media propaganda and factional biddings between the government and the [parliamentary] opposition in Israel. [Yet,] despite the lack of field indicators heralding a new war on Gaza, the Palestinian people are ready to defend themselves, and they do not care about the threats. At the same time, the resistance is preparing unprecedented surprises, and the [Israeli] army must have learned a lesson or two from the 2014 Gaza war and the great performance of the resistance.”

Although Hamas says it refuses to be terrorized by the Israeli threats, since early August the field situation in Gaza has reflected a state of security tension — contrary to what Abu Zuhri claimed. Israeli airplanes are hovering in Gaza’s skies intensively, fishermen’s boats are being shot at daily and the eastern borders of the Gaza Strip are being infiltrated sporadically. Palestinians are ready for a possible setback in the field situation that might lead to war.

Iyad el-Bozom, the spokesman for Gaza’s Interior Ministry, told Al-Monitor, “We conducted general maneuvers in the Gaza Strip in April to test the performance of the security and service institutions in Gaza’s cities and to detect the points of weakness and strength in the internal Palestinian front, in light of the lessons we learned from the Gaza war in 2014. We will be preparing for a general maneuver in the Gaza Strip in the coming weeks for the first time, to test our readiness to fight the Israeli aggression.”

One cannot talk about the last bloody war that Israel might launch on Hamas to eliminate the movement without exploring the political stances of Hamas' allies in the region, especially Qatar and Turkey. How might their pro-Hamas reactions play a role in deterring Israel, especially in light of the Turkish-Israeli reconciliation that took place in June?

Mukhaimer Abu Saada, a political science teacher at Al-Azhar University in Gaza, told Al-Monitor, “The regional political setting surrounding Hamas is the worst in the movement’s history. Its relations with Egypt are tense, while its relations with Iran have not improved. The Arab Gulf — mainly Qatar and Saudi Arabia — are preoccupied with the situation in Syria and Yemen, and Turkey and Israel have reached a reconciliation."

This complicates the situation for Israel, he noted.

"Israel might be encouraged to catch Hamas off guard with a violent war, [but] it does not want a new boycott in relations with Turkey," he said. "Therefore, the Israeli stance seems unclear, as Israel is torn between launching a war on Gaza or refraining from doing so.”

Perhaps Israel and Hamas realize that the upcoming war won’t be like those in 2008, 2012 and 2014, as they both learned military and pragmatic lessons. The next war could be bloody and fierce, and both sides might need to think deeply before casting the first stone, especially amid Israel’s talk about this war being terminal.