Netanyahu has no 'smoking gun' on Iran

With his speech to Congress, Prime Minister Benjamin Netanyahu hopes to breathe new life into the "Iranian existential threat" to improve his chances of being re-elected as the one person who can stop the Iranians. 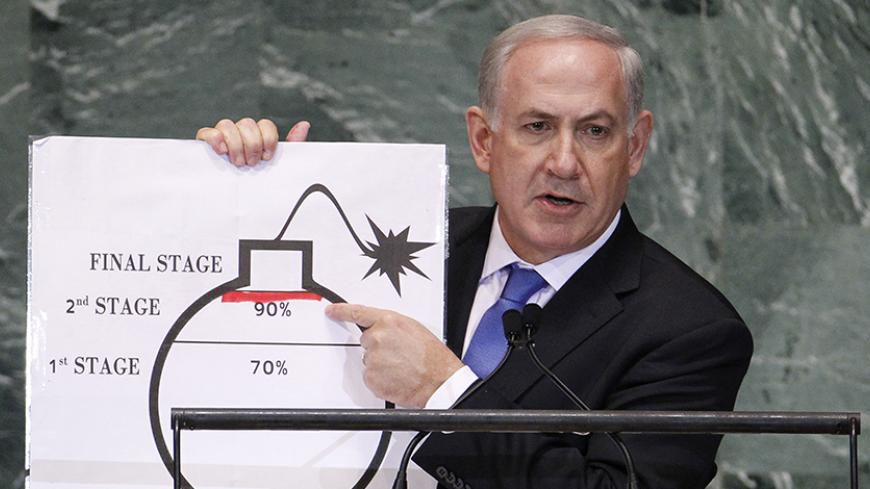 Israel's Prime Minister Benjamin Netanyahu points to a red line he has drawn on the graphic of a bomb as he addresses the 67th United Nations General Assembly at the UN Headquarters in New York, Sept. 27, 2012. - REUTERS/Lucas Jackson

Israeli Prime Minister Benjamin Netanyahu's speech to the US Congress is scheduled for March 3. The fate of the P5+1 nuclear negotiations with Iran will supposedly be determined by the end of March, a timetable that justifies the problematic timing of the prime minister’s speech. The emphasis is on “supposedly,” because no development is likely to occur in March or April or even May or for that matter by the end of June that justifies turning the members of Congress into a cheerleading squad at a Likud Party election rally.

Proof of this can be found in the Feb. 9 State Department daily briefing by spokeswoman Jen Psaki: “Our goal here is to come to an agreement on a political framework by the end of March.” She also said, “The extension is through the end of June.” Psaki's statement implies that the world powers are seeking to bring the negotiations with Iran to a close by the end of March, but that the expected final date (as envisioned today) would probably be the end of June.

This has happened before. In the Vienna round of talks, March 1 was designated as the deadline for an agreement, after which that was postponed to March 24. Now it has been apparently extended until the end of the month. The truly crucial date, however, is March 17 — the day of the Israeli elections.

Placing the Iranian issue at the top of the agenda through Netanyahu’s performance in Congress is a recipe for increasing the number of Likud Party voters. If the P5+1 and Iran are on their way to an agreement, which has been called a “bad agreement” by most Israeli politicians on the right, left and center, then the people need a strong and experienced leader like Bibi. Only he can stop the Iranians by recklessly brushing aside a naive American president. In an emergency, the Likud propagandists will argue, Israel cannot afford a new prime minister, one who believes the Arabs and is afraid of the Americans.

Even if negotiations with Iran are headed for a dead end, Netanyahu will cash in. One flight to Congress by Super-Bibi, over the objections of the president, derailed a bad agreement, his advisers will bellow. The Likud campaign commercials will say that thanks to Netanyahu, sanctions on Iran will be increased and the way paved for Israel to act on its own against the enemy’s nuclear installations. Doesn’t the man who twisted the arms of the world powers deserve another term? Likud Deputy Minister Ophir Akunis and Minister of the Interior Gilad Erdan will lash out and ask, Who will bomb Iran and save Israel from a nuclear Holocaust — Buji (Zionist Camp Co-Chair Isaac Herzog)? Tzipi (Zionist Camp Co-Chair Tzipi Livni)?

To ensure that the Iranian issue stays at the top of the agenda, at least until March 17, Netanyahu and his associates have entrenched themselves in intransigent and seemingly unrealistic positions. In an interview last week with the Washington Post's top columnist, David Ignatius, Minister for Strategic Affairs Yuval Steinitz said that the United States is seeking to reach an agreement of 10 to 15 years, until the next generation comes of age after the death of the country’s supreme leader, 75-year-old Ayatollah Ali Khamenei.

“I understand the logic, but I disagree,” Steinitz said. “To believe that in the next decade there will be a democratic change in leadership and that Iran won’t threaten the US or Israel anymore, I think this is too speculative.” In other words, any arrangement that fails to provide a hermetically sealed guarantee that Iran will not develop nuclear weapons from now to eternity will be considered a bad agreement. In fact, Netanyahu wants to dictate the terms of the agreement to the Iranians. Presenting such conditions publicly would, however, in the eyes of Iranians, paint their acceptance as capitulation to the “Zionist entity,” as Israel is called.

The Zionist Camp’s campaign headquarters understand that the Iranian card has become Netanyahu’s winning hand. To head off the effect of Netanyahu’s March 3 address to Congress, the party’s defense experts are rushing to add the Iranian issue to the list of Netanyahu's failures during his past two terms in office. Herzog and his party's putative minister of defense, Gen. (Res.) Amos Yadlin, have joined the right-wing’s “woe-is-me” chorus against the emerging agreement.

Meanwhile in January, a Virginia court was presented with classified CIA documents suggesting the agency may have doctored documents given by Iranian representatives to the International Atomic Energy Agency (IAEA) to indicate that Iran had attempted to develop nuclear weapons. Peter Jenkins, the former United Kingdom representative to the Vienna-based agency, told Bloomberg, “This story suggests a possibility that hostile intelligence agencies could decide to plant a ‘smoking gun’ in Iran for the IAEA to find.” The Bloomberg report cites a spokesman for the IAEA as saying the agency carries out a thorough assessment of the information it receives.

This affair follows another case, reported in the book “Manufactured Crisis,” about which I wrote in Al-Monitor last May. The author, journalist Gareth Porter, claims that in 2002 the Mossad planted falsified documents on a laptop regarding the Iranian Natanz uranium enrichment facilities. According to Porter, these documents served as the basis for the US-Israeli claim that Iran had misled the IAEA for two decades. Several months later, the organization’s inspectors discovered that the information about Natanz was apparently unfounded, but in the meantime, the neo-conservatives in Washington had already managed to spread the questionable report to world media outlets.

The CIA documents and the revelations in Porter's book raise the suspicion that elements in Jerusalem and Washington are using all means at their disposal to keep the “existential Iranian threat” at the top of the international agenda as well as at the top of the Israeli domestic agenda.

Shmuel Meir, an Israeli nuclear affairs expert and a fellow at Tel Aviv University’s Institute for National Security Studies, wrote on his blog Feb. 17 that Iran had provided the IAEA with clarifications regarding its testing and suspect military activity carried out before 2003. According to Meir, who served as a researcher in the Israel Defense Force's Military Intelligence Corps and its Strategic Planning and External Relations Division, the emerging agreement between world powers and Iran removes the short-term potential danger of nuclear weapons popping up in Iran and vacates the argument regarding Iran as an existential threat to Israel.

But really, who pays attention to a little-known blogger who dares interrupt the chorus singing the requiem for the Jewish state? One is allowed to argue that Netanyahu is harming Israel’s ties with the United States, but giving up the Iranian nuclear bomb issue, especially on the eve of elections, is tantamount to political suicide.