Altering the committee investigating the fall of Mosul to reflect the political quota system serves the interests of the political parties and blocs, not finding the truth. 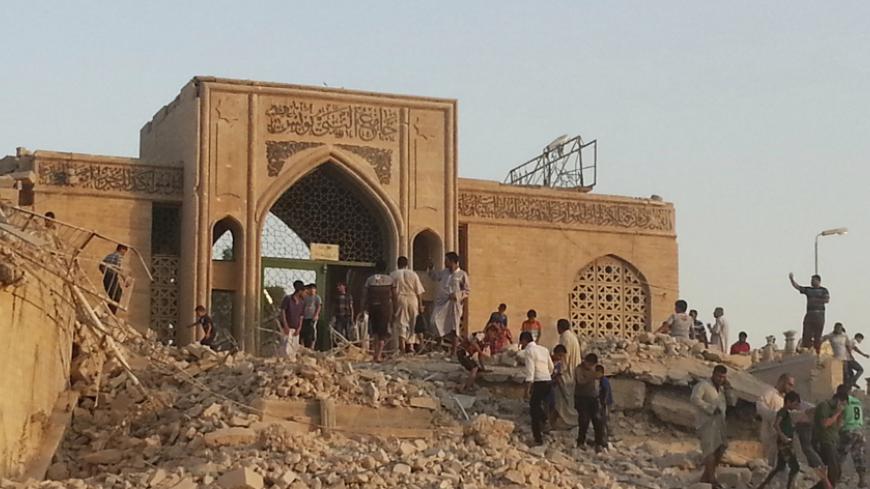 People walk through the rubble of the Prophet Younis Mosque in Mosul after it was destroyed in a bomb attack by militants of the Islamic State, July 24, 2014. - REUTERS

The committee was supposed to complete its work within 60 days and submit a report of its findings to the parliament. Following preliminary sessions in late December, some political blocs expressed objections to the committee’s performance, demanding that it be expanded. As a result, the Iraqi parliament decided on Jan. 8 to restructure the committee to include all Iraqi segments and political blocs, thereby increasing the number of members from seven to 26. In addition, the first three preliminary investigative sessions were nullified, requiring that all investigations be restarted.

These actions have faced much criticism. The day after the parliament decided to increase the number of committee members, Hakim al-Zamili, the chairman of the committee, publicly objected to the plan and said at a Jan. 9 news conference that adding more members would impede the investigation. He also said that the real goal behind the decision was to “steer the investigations off the right course.” Zamili further said that some of the new committee members had been acting as lawyers and protectors of some of the people being investigated.

All this raised the issue of how the committee can effectively go about its work after the chairman's comments about its members. The State of Law Coalition, former Prime Minister Nouri al-Maliki's bloc, also expressed similar reservations in a statement released to the Iraqi media Jan. 15. The coalition accused some committee members of non-professionalism and others of protecting targets of the investigation. It also openly pointed the finger at Atheel al-Nujaifi, the former governor of Ninevah province and brother of former parliamentary Speaker Osama al-Nujaifi. According to the coalition, the committee had been trying to cover for his role in the fall of his city.

The committee may have been forced to take a bad turn in including representation from all the political forces, as it reflects a political consensus according to the quota system, which has been the norm in the country's political process. This same system has failed for the past 10 years, and Iraqis have never been satisfied with it. Many consider it to be the main reason behind Iraq's rampant corruption and lack of ability to move forward in improving the country.

In a phone interview with Al-Monitor, Amer Hassan Fayyad, a political science professor at the University of Baghdad, said that the Mosul committee suffers from a number of problems and in its current form cannot carry out a credible investigation.

Fayyad boiled the problems down to three main points: the committee cannot act professionally, as it has no clear guidelines or rules; it was formed based on the quota system, which will water down its capabilities, as it will be subjected to various contradicting views and pressures; and it should include military and legal experts, but currently lacks their competence.

The quota system to establish political consensus only serves the interests of political blocs and parties at the expense of impartially getting to the core of major issues. If the committee on Mosul operates according to the pressures of the quota system, it will be forced in the direction of political consensus and compromise, and thus have little chance of finding fault or causes for the fall of the city.

As soon as the Iraqi parliament declared its intention to conduct investigations into events surrounding Mosul, some of those following the issue expressed the concern that such a step would lead to politicization and downgrading of the process. The Iraqi judiciary voiced its opposition to parliament taking the lead in the investigation in a statement by chief prosecutor Mohammad Qassim al-Janabi that was reported Jan. 13 by local and Arab media outlets. The judiciary asserted that civil prosecution should not be invoked in the case of Mosul, because it was a military matter involving military leaders and officers abandoning their positions. Therefore, the case should be dealt with by military courts.

Fayyad concluded that the committee, in its current shape and composition, will be unable to achieve the desired goals. He said that to address the issue, the committee should be reconstituted on valid legal grounds and include experts from outside parliament.