The Pentagon recently declared its 2015 plan to liberate Mosul from the Islamic State, an operation that may be effective only if the resistance groups already operating in Mosul are involved. 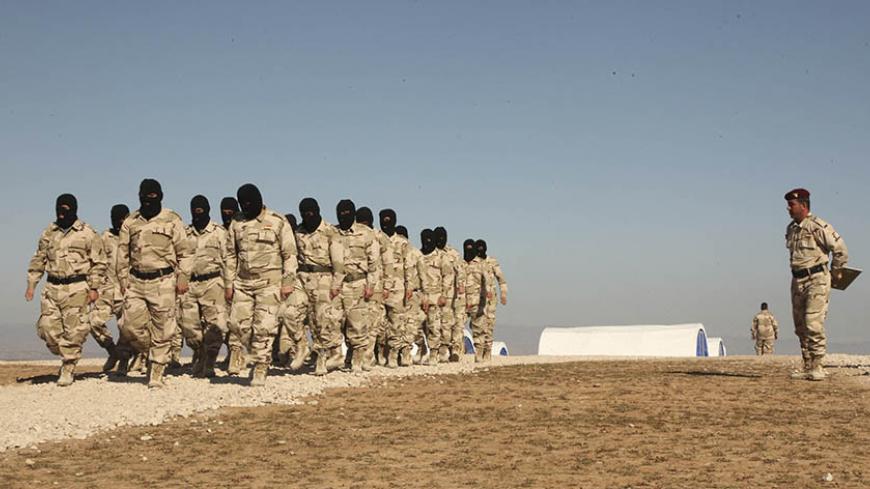 Volunteers from Mosul take part in military training as they prepare to fight against Islamic State militants, on the outskirts of Dahuk province, Jan. 24, 2015. - REUTERS/Ari Jalal
Ben Decker
February 26, 2015

In light of recently announced plans by the Pentagon to coordinate a spring offensive in Mosul, much of the discussion has thus far focused on the training and deployment of a myriad of Iraqi and Kurdish military battalions. There are only whispers about the potential involvement of resistance groups currently operating within the ostensible Iraqi headquarters of the Islamic State (IS).

Among such groups, the Free Officers Movement quietly assassinated two IS commanders in the city in February. However, Pentagon officials have largely ignored their existence. Ultimately, for any military plans to successfully forge a sustainable governance strategy, let alone a military success in Mosul, it is imperative that such local resistance groups be granted an active role in the operation.

Mosul’s Sunni community was somewhat welcoming toward IS in the first weeks of June 2014, initially perceiving the group as the Sunni liberators of a city that had been suppressed by a predominantly Shiite military for several years.

IS was not new to Mosul when it entered the city in 2014. The group, under previous names such as al-Qaeda in Iraq, the Majlis Shura al-Mujahideen and the Islamic State in Iraq, had run criminal enterprises that included protection rackets, extortion and black market smuggling in the city for the last several years. However, its shadowy status in Mosul society had not created enough concern about the group’s ambitions until the implementation of its own version of Sharia in July.

In late August, Mosul Battalion members claimed to have orchestrated a series of daily improvised explosive device and shooting attacks against IS, leading to the death of at least 25 IS militants.

On the whole, Mosul-based resistance has increased significantly since the beginning of 2015; last month, the MLC began publicizing its work through a local public relations campaign called the “Movement to liberate Mosul the dignified.”

On Jan. 21, the campaign published letters reportedly written by Abu Bakr al-Baghdadi and handed to them by alleged IS defectors, detailing financial strategies.

All in all, the increased local public relations, coupled with a series of attacks, have reportedly led to increased recruitment numbers for the Free Officers Movement and could trigger increasing recruitment in other MLC-aligned groups over the coming months.

Returning to the US plans to launch a Mosul offensive, Iraqis are skeptical over whether a purported 25,000 Iraqi soldiers and three brigades of Kurdish peshmerga will be able to succeed in the short term.

Hakim al-Zamili, the head of the Security and Defense Committee in the Iraqi parliament, expressed hesitation over the spring 2015 timetable, claiming that the Iraqi military has yet to receive the advanced weapons and training it needs and without which, according to Zamili, any operation would be “fruitless.”

Such statements are indicative of a larger divide that has existed between the Iraqi and US militaries since the 2003 invasion. As the United States continues to send trove after trove of light, medium and heavy weaponry, Iraq has and will likely continue to claim that much of it was either not received, or even worse, has disappeared.

In light of both the US and Iraqi interests in developing a more sustainable governance strategy in a hypothetical post-IS Mosul, stamping out deeply rooted military corruption is critical, as it remains one of the most significant catalysts for the turmoil that the region has experienced over the past eight months.

Any strategy aimed at forcing IS’ withdrawal from Mosul must take into account every localized civic and government element in the city to effectively convince Mosul residents to renew their trust in both the Iraqi military and the Iraqi government.

From a tactical standpoint, this means increased cooperation between the international coalition and Iraqi security forces with Mosul-based resistance groups such as the Free Officers Movement.

While the spring timetable for any such Mosul liberation offensive remains unlikely, by developing a strategy that forces both state and non-state actors to work together, the US military may be able to offer the Iraqis an effective solution to prevent the next security crisis.

On the whole, any IS withdrawal from Mosul, if and when that actually happens, is unlikely to be the group’s final foray into Ninevah province, and it remains unclear whether the United States will be able to afford the price tag associated with the next conflict.