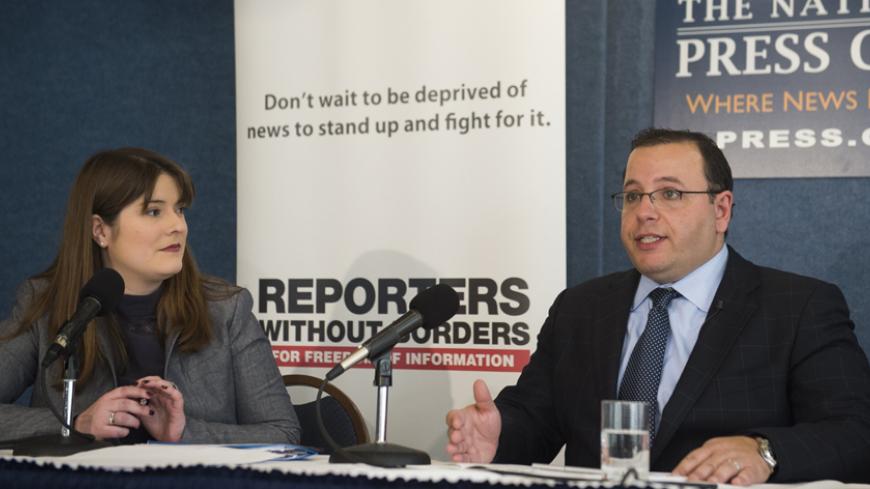 Ali Rezaian, brother of Washington Post Tehran bureau chief Jason Rezaian, who has been detained in Iran since July 2014, speaks alongside Delphine Halgand, the US director of Reporters Without Borders, as they discuss the World Press Freedom Index 2015 in Washington, DC, Feb. 11, 2015. - SAUL LOEB/AFP/Getty Images
Arash Karami
@@thekarami
February 17, 2015

Hard-line Iranian Parliament member Hamid Rasaei has been on a mission to connect the case of detained Washington Post journalist Jason Rezaian to the administration of President Hassan Rouhani. Rasaei has accused a figure within the administration of granting Rezaian high level access to sensitive institutions and called for the airing of an alleged confession by Rezaian on Iranian TV.

Rasaei, the deputy head of Iran’s Parliament’s Article 90 investigative committee, said, “The important question is who was supporting Jason Rezaian [and why] within the role of a Washington Post reporter he was able to inspect sensitive places of the country.” He added that while Rezaian published “half-positive” articles, “his prime motive for these inspections was not for reports to be published.” He did not go into detail about the accusations other than saying Rezaian’s motive was to bring about more pressure on various Iranian industries.

In a Feb. 14 parliament session, Rasaei called for an investigation into “which official from the president’s office has his footprints in the spying case of Jason Rezaian and his wife, that with a title of journalist, they had penetrated the highest institutions of the presidency.” He continued, “Explain which director in the president’s office gave access to this individual. With correspondence from which individual did Jason Rezaian pass through important security barriers?”

Since Rouhani’s June 2013 election, Rasaei, a member of the Steadfast Front, has been one of the harshest critics of the administration. His weekly publication, 9 Dey, was suspended yesterday on the orders of the Press Supervisory Board, which operates under the President’s Culture Ministry.

One of the reasons for the suspension was the publication of article “inconsistent with the policies of the Islamic Republic in the nuclear field.” The article in question reported about the walk in Geneva shared by Iran Foreign Minister Mohammad Javad Zarif and US Secretary of State John Kerry, “every one of Zarif’s steps destroyed 100 kilograms of enriched uranium.”

Rezaian, a dual citizen, was arrested July 22 along with his wife Yeganeh Salehi, who is a reporter for The National, and two other individuals. Salehi was later released.

The Rezaian family recently sought a new lawyer after the previous lawyer was not granted permission to see him, according to his family.