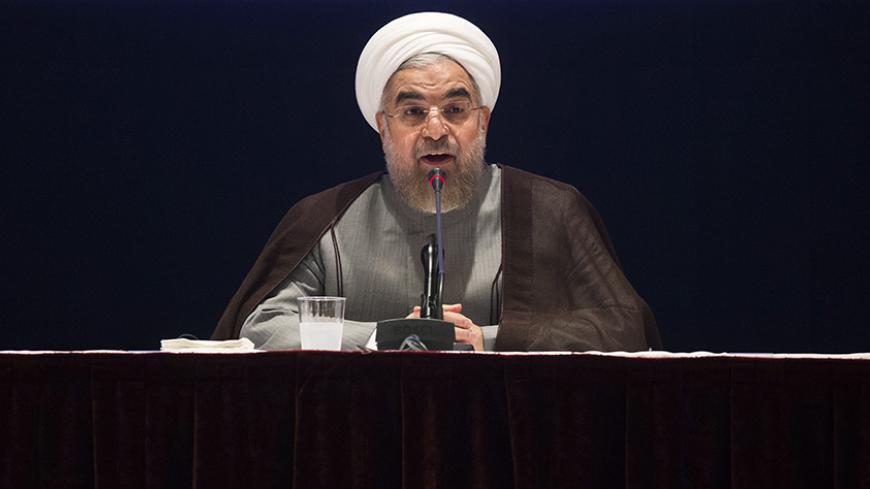 In a speech Feb. 23, Iranian President Hassan Rouhani touted his administration’s economic achievements. Soon after, both economists and his political rivals questioned his assertions as well as his methods of deriving the extraordinary numbers.

“Last year we brought down inflation for Bahman (January-February) and Esfand (February-March). No one could have predicted that inflation would be zero for Bahman and yesterday the Center for Statistics announced this figure [of zero],” Rouhani said, adding that there was an increase of of 25% in non-oil exports.

The announcement of zero inflation raised eyebrows in Iranian media. Inflation — about 40% at the end of Mahmoud Ahmadinejad’s presidency — has been one of Iranian voters' biggest concerns, and although Rouhani has considerably lowered inflation through subsidy reforms and other policies, zero inflation was seen as an exaggerated reduction.

Mehr concluded that the only measurement of inflation that would give a zero-percent inflation is that if a monthly comparison was used, meaning comparing Bahman to the previous month, Dey (December-January). The article said that using this month-to-month criteria for measuring inflation is not approved by neither economic nor government officials.

Alireza Zakani, a conservative member of the Iranian parliament and a member of its Committee for Internal Affairs, said that if the economic numbers that Rouhani announced were true, it would be a “miracle.” But more important, it raises questions about Rouhani’s foreign policy and the nuclear negotiations he has pushed for.

Zakani said that those in favor of nuclear negotiations had pushed the idea that Iran’s economic problems were related to the nuclear sanctions, rather than poor management, and that a nuclear compromise is necessary to take the stress off of Iran’s economy. Therefore, Zakani said that either there is doubt about these numbers Rouhani gave or “the impact of the sanctions and the method we used to counter these [sanctions] in our foreign policy is exposed to doubt and uncertainty.”

Either way, Zakani said, “What society feels with respect to these numbers and figures, is it creates doubt and suspicion.”

Fars News also pointed out that the major Reformist newspapers, typically strong supporters of Rouhani, did not make the claim of zero inflation its top story — odd because this was one of Rouhani’s campaign promises.

Fars, which is highly critical of the Reformist press, concluded that this proves that Reformist papers only support the president when it increases “controversy and conflict.”

Though the Fars argument does not necessarily follow, it's noteworthy that the news was not welcomed more by Reformist papers.