Iran has opened a series of high-level judicial cases against former administration officials, leading some to believe that the government is cleaning up its act to attract private investment in the economy. 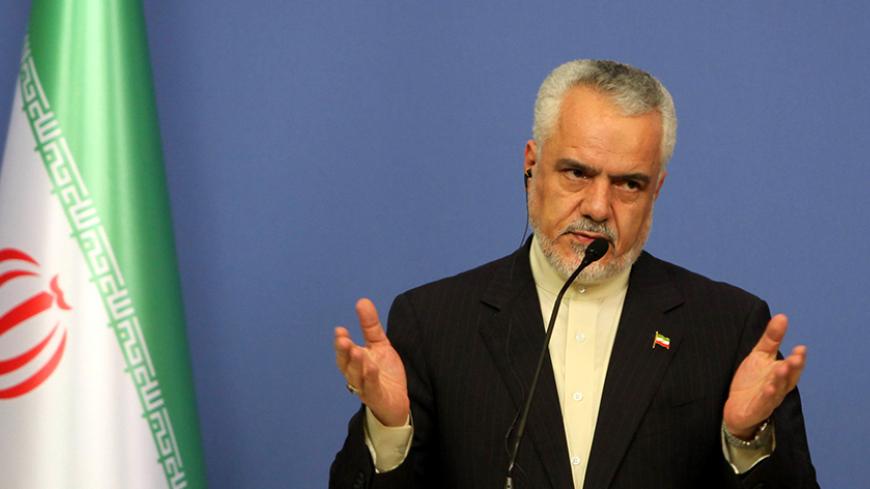 With the imprisonment of Iran's former First Vice President Mohammad Reza Rahimi Feb. 15 on charges of corruption and embezzlement, Iran's fight against corruption has taken on unprecedented dimensions. Incidentally, through this and other cases, the complex structures of financial and administrative corruption that persisted in the Mahmoud Ahmadinejad era are coming to light.

Rahimi, who served in President Ahmadinejad's government, was sentenced to 5 years and 91 days in prison and the payment of a fine of 10 billion rial (approximately $350,000). Rahimi was originally sentenced to 15 years in prison, but the Supreme Court reduced his sentence. This is the most high-profile corruption case in Iran since the case against former Tehran Mayor Gholamhossein Karbaschi in the 1990s.

It is likely that this trend will continue with other high-level figures of the Ahmadinejad era to be charged and prosecuted. However, as the Rahimi case indicates, such high-level corruption cases will also create unwanted waves in the political structure. In fact, Rahimi’s conviction unleashed an avalanche of political accusations and counteraccusations that could potentially lead to the dismissal of a number of existing parliamentarians who accepted bribes from Rahimi and his network. Two other members of that network have also faced charges: Babak Zanjani, a businessman who is serving a prison term for corruption and misappropriation of state funds, and Saeed Mortazavi, a former judge and former head of the Social Security Organization in the Ahmadinejad government who has been suspended from all governmental positions and is still being tried for corruption.

The fact is, opaque dealings and give-and-takes between political and business networks intensified in the Ahmadinejad era, even though they existed in previous administrations. In fact, in May 2014, Gholamali Jafarzadeh stated that the extent of “corruption is so big that we are scared it could cause social shock.” Consequently, there is no doubt that a serious push toward fighting corruption would unleash political tensions that could paralyze the political decision-making processes in the country.

Despite that risk, the Hassan Rouhani administration has intensified its efforts to fight financial and administrative corruption. Apart from exposing many corruption cases, the government organized a high-level conference on Dec. 8, 2014, with the heads of the three branches of power to create momentum against corruption. The effort also has the backing of Supreme Leader Ayatollah Ali Khamenei. In fact, Ayatollah Khamenei sent a brief message to the mentioned conference stating that instead of holding seminars and conferences, he wanted to see serious actions against corruption.

At the conference, President Rouhani promised to apply all his “power to fight corruption,” but more importantly, he urged officials to look at corruption as a national security issue. He said, "The continuation, the deepening and the expansion of corruption is endangering … the Islamic revolution."

By elevating the issue to a national security threat, Rouhani is opting for a more intense momentum in the fight against corruption, though the overall political structure will make the fight very challenging. Evidently, there are many dimensions in the current process; the behavior of all key stakeholders is political — it is related to factional competition but also to the positioning of key political forces for the March 2016 Majles elections. All key political figures have weighed in and presented their remedies for fighting corruption. Rouhani views the main causes of corruption as the lack of transparency, inappropriate laws and regulations, and accumulation of power in some entities. His remedies include increased transparency through e-governance, breaking monopolies, reforming relevant laws and regulations, and engagement of civil society and the media. Last year, Rouhani asked the Iranian media to help in the process. For Majles Speaker Ali Larijani, the key remedy is to downsize the government and to empower the private sector to become more competitive.

Interestingly, all top political figures are talking about the need for increased transparency and for empowerment of the private sector. However, the track record of the past decades indicates that the real private sector remains hesitant to enter into competition with large governmental or semi-state organizations. Consequently, a push to downsize the government would usually lead to an enlargement of the semi-state sector — itself a source of new monopoly situations that undermine the presence of genuine private-sector players in the economy.

As such, one motivation for the government’s higher level approach to fighting corruption is to communicate to the private sector that the new government is cleaning up the scene to attract more genuinely private investment. It is also evident that such investments will be needed to help the economy absorb the negative impact of lower oil prices and prolonged nuclear negotiations.

However, the private sector is concerned that, similar to previous attempts, the campaign would only target low-level managers and figures not involved in main corrupt networks. Nonetheless, the new momentum has created a very healthy debate on the issue of corruption and on how it can be addressed through policies and actions. For instance, Gholam Hossein Shafei, president of the Iran Chamber of Commerce, Industry and Mining, has presented his road map for fighting corruption. His guidelines include: “political and structural reforms; serious reforms in management concepts; genuine privatization; growing role for nongovernmental organizations and civil society; growing space for independent media to supervise business and government activities; and the promotion of codes of conduct in the private and public sectors.”

The key question remains whether the political elite will be willing to engage in such a reform agenda. Some reforms will be more feasible, such as amendments to the laws and regulations on government tenders to increase transparency and improve the competitive environment. However, a number of the mentioned reforms, especially political reforms and press and civic freedoms, will be very challenging in the current political situation. Consequently, the campaign has no choice but to focus on exposing past corruption cases that will in turn lead to a deepening of the factional infighting and political paralysis.

As such, the real campaign against corruption will be the one that addresses legal, political and structural issues so that future cases can be prevented. It remains to be seen if the Rouhani administration will generate the political will to approach the issue from this perspective. Maybe if the next Majles is dominated by reform-minded forces Iran will see a more genuine anti-corruption campaign. In the meantime, it will mainly remain a political tool and will be used more intensely as Iran approaches the 2016 Majles elections.