Iran’s leaders have put a renewed focus on increasing domestic production, yet to achieve this goal there must be political stability and sincere efforts to push back on corruption. 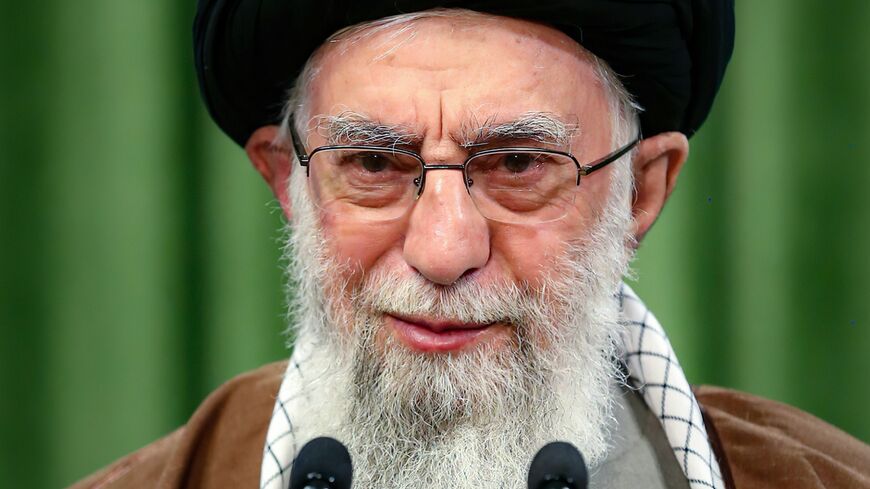 Iranian Supreme Leader Ayatollah Ali Khamenei's slogan for Iran this year is “Support production and remove barriers to domestic production.” There are many such barriers to overcome. This March 2021 photo came from Khamenei's website. - Wikipedia/Ali Khamenei website (khamenei.ir)

Traditionally, Iranian Supreme Leader Ayatollah Ali Khamenei uses his Nowruz speech to produce a slogan for the upcoming year.  In his March 20 speech he presented the following objective for the new Iranian year: “Support production and remove barriers to domestic production.”

In line with this objective, the Ministry of Industry, Mining and Trade conducted a survey of industrialists to identify the existing challenges for Iranian manufacturing companies. As Iran works to boost production, a close look at the actual impediments involved can offer insight on what needs to be addressed to pave the way for the domestic industry to flourish.

Based on the above survey, the top impediments to domestic production are the following: Lack of economic stability, high inflation, lack of financing solutions and loan facilities, external sanctions and the existence of lucrative non-productive sectors in the economy.

Furthermore, in assessing which institutions and sectors would need to be reformed, the overwhelming majority of respondents pointed to the shortcomings in the banking sector.  Other mentioned fields requiring reforms were taxation laws, social security regulations and other government directives relating to the environment, energy and water, etc.

One segment of the survey focused on the responsibilities of the Ministry of Industry, Mining and Trade, where the respondents deemed the following processes in need of serious reforms: Issuing of licenses, infrastructure investments, allocation of hard currency and legal obstacles to export activity.

Responding to a question regarding what the ministry’s priority should be in the near future, the majority requested a deregulation of the manufacturing sector, an improvement of the business climate and the introduction of incentives for new investments.

In 2019, President Hassan Rouhani’s government had presented the Majles — or Iran’s parliament — with a bill calling for deregulation of the manufacturing sector,” but it has been stuck in the legislature. The parliament since the February 2020 elections has been fully dominated by conservative factions.

At the same time, a number of parliamentarians, including a member of the Majles budget and planning commission Jafar Ghaderi, say they believe the bottlenecks result from the lack of proper execution and enforcement of laws that already exist. Ghaderi said, “Laws that were designed to promote domestic production have either not been implemented or were enacted in a way that undermined domestic capacities.” Indeed, there is no shortage of laws and regulations in the country and the main issues usually emerge when laws are not implemented properly, either due to politicization of decisions or due to incompetence, mismanagement and corruption.

Reading between the lines of the survey shows that respondents are unhappy with how relevant authorities and the banking sector are doing their jobs. Issues such as granting and extending licenses, allocation of loan facilities and hard currency — among other things — are all functions that are subject to corrupt practices as well as incompetence. The negative impact of corruption on domestic capacity building has been well established in Iran, especially through various studies by Iran's chamber of commerce. The existence of widespread corruption is not a secret and even Khamenei has underlined the need to fight corruption on multiple occasions, including in his recent Nowruz speech.

Therefore, a main tool for promoting domestic production should be to contain corruption. However, as Al-Monitor pointed out more than three years ago, dismantling corrupt networks will require major political and structural reforms. In the words of prominent economist Hossein Raghfar, the three steps that will knock out corruption in Iran are transparency, removing military organizations from economic activities and a concerted effort by all three branches of power to root out corruption.

Rouhani’s first reaction to the call by Khamenei was to point to the significance of “transparency and e-government structures” to fight corruption.

While the pandemic has given Iran an opportunity to make technological leaps with regard to digitalization and introduction of e-government concepts, the core question is how transparency can be promoted in a political culture that thrives on ambiguity. Corrupt practices benefit from legal and operational ambiguities that exist as a result of complex political and clerical patronage structures, domination of some economic sectors by semi-state institutions, external sanctions and internal discrimination against the real private sector in favor of semi-state beneficiaries, etc.

As such, removing the barriers to domestic production would only happen if the country’s top leadership engages in genuine legal, political and structural reforms in order to get rid of the ambiguities that create fertile ground for corrupt practices. The needed reforms will have to include a ceding of economic interests to the real private sector. What has happened in Iran so far has been a ceding of economic power from the government to the semi-state sector.

It is evident that sweeping political reforms and a ceding of economic power to the private sector won’t happen within the current political realities. As such, improvement could only happen through incremental steps and remedies that the Islamic Republic can engage in without fully revamping the current state structures.

For example, one could reduce the scope for corrupt practices by:

-Transferring the responsibility for issuance of licenses from the government to established nongovernmental and professional organizations.

-Using modern oversight tools to prevent favoritism and nepotism in the granting of loan facilities in the banking sector.

-Creating alternative money markets through which industries could mobilize financing tools without being dependent on commercial banks.

-Expanding e-government platforms to reduce the interaction between economic players and government officials. One crucial step would be to use e-government to change the tense relationship between tax authorities and corporations.

-Clearly defining economic sectors in which semi-state institutions will be active so that the real private sector can be assured a more transparent and competitive market environment.

-Protecting whistle-blowers and journalists who could potentially expose corrupt entities within the state structure.

-Allowing the private sector to create new institutions and associations that could represent the sector in various bargaining processes.

There are many opportunities to incrementally improve the business climate; however, the focus will have to be on two top objectives — inducing more stability and pushing against corruption. The one remedy that will certainly help achieve both goals is the lifting of external sanctions. Any other strategic choice at the current juncture will only undermine the country’s ability to materialize its economic potential. That is why Khamenei’s request for removing obstacles to increased domestic production will have to start with his instructing the establishment to show the political will to achieve the mentioned objectives. Insisting on other reforms without attending to the crucial contribution of political and structural reforms will not achieve any meaningful results.