Iran's president wages an uphill battle against an anti-capitalist ideology that dominated the postrevolutionary era in Iran. 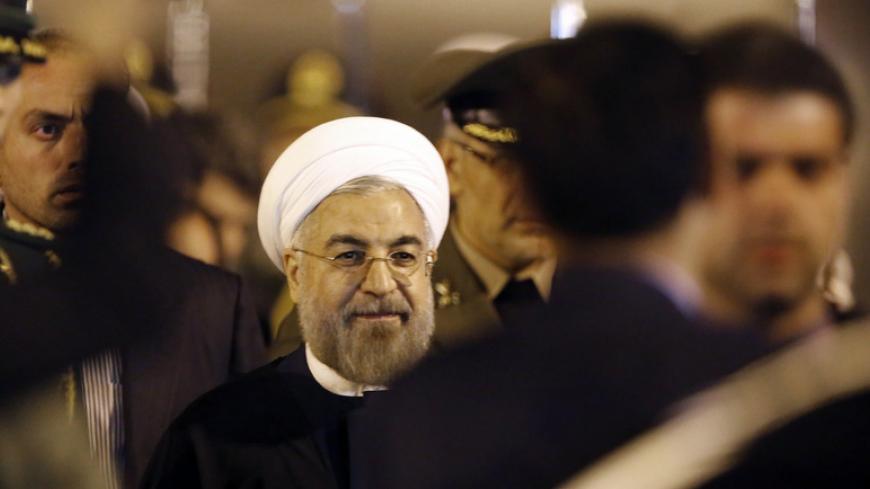 During a June 21 speech to judicial officials in Tehran, President Hassan Rouhani hinted at the need for a number of structural and cultural reforms required to promote private-sector activity in the Iranian economy.

Most significantly, Rouhani pointed to the fact that some regime constituents viewed private wealth and investments as a problem. Rouhani said, “Some still view an investor as a negative phenomenon and believe capital is immoral and see poverty as an honorable status. As long as such beliefs exist, we won’t reach our objectives.”

Rouhani is clearly targeting the remnants of the anti-capitalist revolutionary ideas that dominated the initial postrevolutionary years, whose initiatives included confiscation of property owned by industrialists and merchants. Many officials in Iran still have an antagonistic approach toward private businesspeople, which translates into restrictions on private-sector activity.

The president also remarked that the privatization process had failed, saying, “The new interpretation of Article 44 [of the constitution] was meant to privatize the economy, but this did not happen and assets were shifted from the government to the semi-state sector.” This is an important admission regarding the failure of privatization and the fact that Iran's genuine private sector still faces many challenges in the face of public-sector dominance of the economy.

He identified "corruption" as the key obstacle to attracting private investments and underlined the significance of the judicial system in combating corruption. He said penalties alone will not solve the corruption issue, and that the root causes would have to be tackled. According to Rouhani, the use of e-government systems could reduce corruption, as could “transparency in laws and in judicial sentences” and the feeling of “security.”

In fact, lack of investment security has been a key parameter in Iran with regard to private-sector perceptions of the business climate. Arbitrary judicial decisions, usually driven by opaque interest groups, have repeatedly undermined private-sector interests in Iran. This may be why Rouhani insisted that “no one should have the right to interfere in judicial decisions!”

Professor Bahman Akhavan believes Iran needs investment security to attract domestic and foreign investment. “We need intellectual security and not military security! Our laws are a burden and our authorities inflexible. Furthermore, administrative corruption and opaque laws are among other sources of investment insecurity.”

While it is relatively clear which reforms the government needs to implement to attract more private investment, prescribing a reform agenda for the judiciary will be more challenging.

Furthermore, Khamenei outlined the two pillars of a successful Islamic economy: “first, wealth generation, as an Islamic nation should be rich to be able to materialize its plans; and second a just distribution of wealth.” He said the country would only become wealthy if all groups have a share in economic activity, investments and wealth generation.

The above statement is in direct contrast to those who, according to Rouhani, “see poverty as an honorable status.” Back in 2007, as well as today, the Iranian judiciary has been a weak link in providing investment security. In fact, in 2005, almost immediately after the inauguration of Mahmoud Ahmadinejad's government, under Ayatollah Mahmoud Shahroudi, the judiciary established an office for “investment promotion,” realizing that deficiencies in the judicial system were hindering private-sector activity. Incidentally, that office, along with all other initiatives and high-level interventions by political leaders, have failed to improve the overall conditions for private-sector activity. It can be debated whether institutional inertia or opaque interests are the main cause for the lack of progress in the Iranian judiciary, but the fact remains that Iranian private-sector players do not feel fairly treated by the country’s judiciary.

Clearly, the dominance of the Ahmadinejad faction between 2005 and 2013 and the promotion of a “security-based” economy had something to do with the lack of progress. In fact, in the name of “security” many genuine private-sector companies and entrepreneurs were excluded from business opportunities. Under the same pretext, private-sector bidders were pushed out of privatization processes, so the share of the real private sector has been below 5%.

Another reason for the lack of public confidence in the Iranian judiciary is the fact that judicial authorities refuse to publish the names of individuals who have been engaged in corrupt dealings and embezzlement. Despite a high-level commitment to fighting corruption, and the judiciary pursuing a number of cases, only names disseminated by government officials have been published. The behavior of judicial officials has for years strengthened the view that members of the judiciary — or maybe security forces — are involved in corrupt dealings. Furthermore, in the high-profile corruption case against a private businessman, Mahafarid Khosravi, a swift execution of the suspect prompted suspicions that he may have disclosed names of officials who were also involved in the corrupt networks.

All in all, Rouhani’s speech to the Iranian judiciary can be seen as a reminder that judicial reforms will be needed for the promotion of genuine private-sector activity in the Iranian economy. Transparency and the use of modern technology may be key remedies for improvement, but at the end of the day, Iran will need a judiciary that is independent of political, ideological and security-driven influences — a task that seems almost impossible.