The role of foreign exchange, fuel smuggling and commercial rents are all under scrutiny. 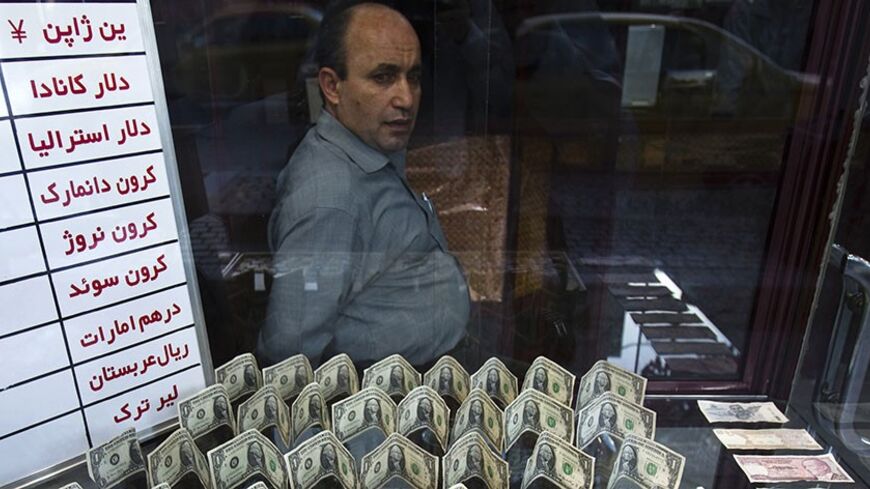 An exchange currency dealer sits at his shop as he waits for customers, Tehran's business district, Oct. 24, 2011. - REUTERS/Raheb Homavandi

Experts agree that Iran’s path out of its current economic situation will have to include a growing focus on private sector activity as a source of employment and economic growth. While private sector players face a host of challenges due to outdated regulation as well as the dominance of governmental and semi-state companies in the economy, they also face an unlikely challenge from society at large.

A recent poll by a televised economic program (“Payesh”) asked: “How have Iran’s wealthy individuals become rich?” While 83% responded, “Through rents and connections,” 12% believed that the wealthy had achieved their success through their own hard work and 5% considered “luck” to be the main reason.

The overwhelming belief that successful private sector players are only a result of their contacts and the rents they secure from the state has been shaped throughout the past decades. The government’s dominant role in the economy and its arbitrary approach to entrepreneurs and private sector players can be considered the main reason for the suspicion that the state would only allow those entrepreneurs to succeed who are closely affiliated with the political power structure.

Instruments such as licensing, access to bank facilities and so on are perceived to be at the government’s disposal to limit the space for the genuine private sector. Furthermore, the involvement of apparent entrepreneurs (such as the recent case of Babak Zanjani) in corruption and embezzlement cases has intensified this belief. Due to the complexity and the multidimensional nature of the power structure in Iran, it is difficult to measure how far political connections have contributed to the success of private sector players. Can one consider the effort by a provincial Majles deputy who wishes to attract an investment to his own constituency also “rent”?

The fact is that both phenomena exist: The majority of Iranian private sector success stories are mainly due to the hard work of entrepreneurs, but there are also many cases where government rent and discriminations have paved the way for extraordinary wealth generation. As in other phenomena, there are also many shades in a country like Iran. The unfortunate reality is that rent-seeking activities have undermined the economic potential of the country.

Therefore, it is important to identify the most significant rent-seeking patterns and differentiate between those and others who succeed due to their actual efforts. According to Ali Shams Ardakani, former diplomat turned entrepreneur, there are three main types of rent-seeking in the Iranian economy. These are:

Unfortunately, the intensified sanctions regime of the past few years facilitated the operation of rent seekers and allowed corrupt networks to operate under the guise of sanctions-busting. At present, the government has a number of tasks in the field of “rent-seeking.” On the one side, it should try to identify and penalize the rent-seeking networks that have prevailed in the opaque economic structure. President Hassan Rouhani’s announcement that the government would pursue those individuals and companies that “circumvented the interests of the Iranian people in the name of circumventing sanctions” could be related to the desire to root out such rent-seeking circles. On the other side, the government needs to increase transparency in the overall activities of all economic players to reduce the potential for rent-seeking. In the words of Ardakani, “It is one thing to go after some corrupt elements or rent-seeking networks, but it is another more important matter to identify the methodology of generating unjustified rents as well as to dry the roots of an illusionary economic policy.” The expected sanctions relief, the planned unification of the exchange rate and also the correction of fuel prices are important steps in the same direction.

Finally, the authorities have to pave the way for the tension-free operation of genuine private sector players, free of unjust competition from rent-seeking networks and semi-state enterprises and free from prejudices in the society. Besides increasing transparency and withdrawing from economic activities, the government should transfer licensing procedures, auditing and supervisory roles to the civil society and limit its own role to regulatory functions. Though it will be a medium- to long-term process to restructure the economy, root out rent-seeking and re-establish trust in the Iranian private sector, this is the time and the administration that can start the process.