Facing stagflation, the Iranian authorities must shift course and de-politicize economic decisions such as foreign exchange policy and management of the country's money supply. 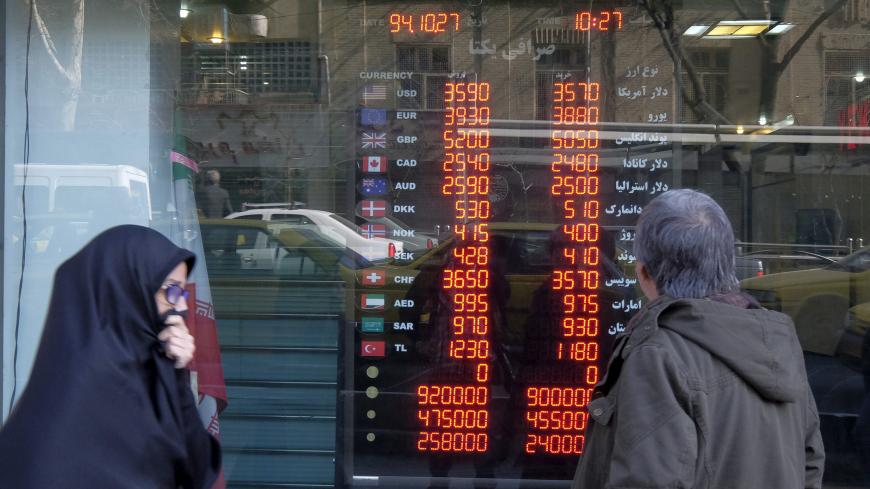 A man looks at exchange rates seen through the window of a currency exchange shop in Tehran's business district, Iran, Jan. 17, 2016. - REUTERS/Raheb Homavandi/TIMA

There is an Iranian proverb that goes, “You can tell a good year from its spring.” Judging from the massive damage caused by the recent floods in Iran, one has to conclude that the new Iranian year (beginning March 21) will be a bad one for the economy. The economic consequence of the recent floods will include a minimum of $2.5 billion in direct damages and even more in indirect losses.

Even before the impacts could be measured, on April 9, the International Monetary Fund revised the growth forecast for Iran downward as part of the overall projections for the global economy in 2019. In the case of Iran, the previous forecast of 3.6% was revised with a projected 6% decline in the current year. The announcement by the Donald Trump administration that it won’t extend sanctions waivers for several countries that buy Iranian oil will make it more difficult for Iran to generate and repatriate its oil export revenues.

Iran, already troubled by economic decline coupled with high inflation — stagflation — has just commenced a year in which unfavorable economic developments will undermine welfare, employment and purchasing power. The projected performance, which will potentially be undermined by the recent floods, will be the worst by Iran’s economy since it contracted by 7.7% in 2012. The main contributor to the economic decline that year was the same as in 2019: the negative psychological and practical impacts of external sanctions, especially the deprivation of segments of the country's oil and gas export revenues. However, it would be a mistake to explain the current picture with sanctions alone.

The IMF projection should not have come as a surprise. Iran’s own experts had predicted a challenging year ahead, including a worst-case scenario of a 5.5% economic decline. Internal think tanks including the Parliament Research Center have produced quite nuanced analyses of the factors contributing to the existing and emerging economic contraction, going far beyond the simplistic analysis that focuses on sanctions. An unbiased analysis will show that a wide range of factors are contributing to the negative economic outlook and there are various remedies that can be adopted to address the bottlenecks.

One of the contributing factors is the government’s budget deficit. It is now established that Iran has a structural budget problem — the government always plans the state budget based on a zero-deficit approach, but ends up producing a budget deficit that contributes to inflation, creating a vicious cycle of inflation, deficit and economic decline. In the first nine months of the past Iranian year, when the most severe impact of US sanctions on Iran’s oil exports had not yet kicked in, the budget deficit had reached an unprecedented 400 trillion rials ($9.5 billion). The deficit was projected to reach 600 trillion ($14.3 billion) by the end of the Iranian year.

Of course, one can blame the psychological impact of sanctions for the slowdown in investment, but major causes of the budget deficit are incompetence and mismanagement. For example, widespread tax evasion is a consequence of domestic corruption and continues to negatively impact the economy. According to the deputy head of the parliament’s economic commission, Kazem Delkhosh, about 35-40% of the country’s tax income is not materialized due to tax evasion. This level can only be explained through the operation of shady and corrupt networks with only their own immediate interests in mind. The only good news is that it is now publicly acknowledged that such shady interests exist. For instance, former vice president and Reformist politician Mohsen Safaei Farahani believes that the Iranian economy is being plundered by a small group of individuals.

A second factor is the inability of officials to contain liquidity growth. Despite attempts by consecutive governments in the past two decades, the country’s money supply has exploded over the past few years. In the last Iranian year, the money supply grew by 20.9% and experts expect a 25% growth in the current year. Majid Reza Hariri, a member of the executive board of the Iranian Chamber of Commerce, believes that the liquidity growth has political causes and can only be addressed through increased transparency in economic activities, especially the banking sector. In other words, as long as decisions such as money supply are driven by economic rents to political power centers, the economy will suffer.

Other phenomena such as the underground economy, an inappropriate business climate and capital flight also play a major role in the bleak economic outlook that Iran is facing today. To highlight one of these issues and show how incompetence is feeding economic decline, it should be noted that in the past Iranian year, Iranian companies exported some $42 billion in non-crude products, but only $10 billion has been repatriated. Capital flight in the form of exports thus creates imbalances in the economy.

All of the above deficiencies have been studied and analyzed extensively. However, the political system seems to be incapable or unwilling to implement appropriate policies to contain their negative impacts. Leading economist Massoud Nili describes the core problem as follows: “None of the economic decisions in Iran are based on expert analysis — it is time to utilize expert knowledge and de-politicize economic decisions. … Liquidity growth will be at alarming levels next year and that in itself will feed inflation and other imbalances." Another economist, Mehdi Behkish, states, “We need to teach our politicians to carry out cost-benefit analyses and understand the economic costs of their political decisions, including FATF-related issues, energy subsidies and the firing of missiles.”

A third economist, Moussa Ghaninejad, offers advice: “Passivity will deepen the economic crisis that Iran is facing. The country will need a clear economic doctrine. ... For example, Iran could promote an export-oriented economy, but that would mean the introduction of a very different foreign exchange rate policy. That may be a game-changer.”

In identifying remedies, one needs to look at recent success in generating economic growth. According to Ghaninejad, “The growth period in 2015 and 2016 was an extension of the optimism that came with the [2015 nuclear deal]. The anticipation was that exchange rates would be stable, hence the speculative element was taken out of the currency market. Furthermore, the business community expected foreign investors to emerge, hence there was investment activity.”

It is evident that the economy must become the top priority to minimize the negative impact of the emerging economic picture. The agenda can evolve around the slogan of boosting local production that Supreme Leader Ali Khamenei has proposed, but it has to address the many impediments that exist. Furthermore, the government has to appreciate that a doctrine promoting transparency, accountability and fighting corruption, rent-seeking and inefficiency will achieve results.

Although counterintuitive for the Iranian government, the authorities have to also stop their attempts to micromanage through price controls and injections of grants that generate rent-seeking and seek a supervisory capacity. A good example of failed micromanagement was the April 2018 attempt to unify the foreign exchange rates. As a result, there are multiple exchange rates and a lot of ambiguity, inviting economic players to speculate. The Iranian market has enough complexities through the presence of opaque structures around semi-state institutions and the more the government and semi-state entities withdraw from active economic roles and take on supervisory functions, the more space there would be for genuine private sector players that can help manage the economic challenges and generate employment opportunities.

Stagflation seems certain, and new policies will be needed. A shift in the foreign exchange policy, better management of money supply and a more disciplined fiscal policy will all help the economy. As a first step to promote exports, the government has already announced that there will be no income tax on revenues generated through them. This is a good step and the government should continue on a similar path to unleash some of the potential in the Iranian economy. However, the needed political and structural reforms should not be forgotten in the process.