The ministry of finance's new set of economic goals and timelines outlines lofty ambitions but ignores the current limits that sanctions place on Iran's international trade. 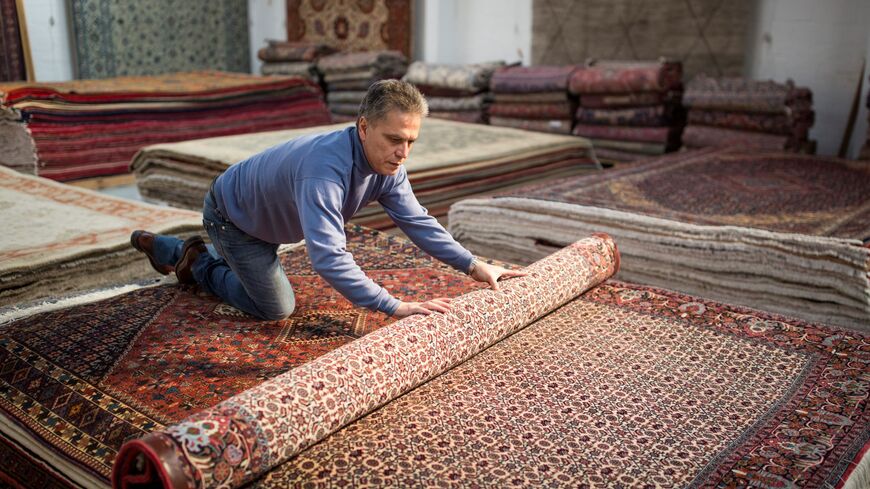 Jalil Ahwazian, managing director of the Oriental Rug Centre, rolls a Persian 'Bidjar' rug on March 17, 2016, in London, England. Sanctions in the US preventing the import of Persian Rugs were lifted and then reimposed as part of the nuclear accord with Iran. - Dan Kitwood/Getty Images

Ehsan Khandoozi, Iran’s minister of finance and economic affairs, has outlined details of an “economic roadmap” to address the country’s economic ills. The goals and timeline had been published in June, but experts were waiting for detailed actions to be published. In the meantime, comments by the minister as well as an initial assessment of the plan reveal more about the feasibility of specific undertakings. There is no doubt that the economic performance of Ebrahim Raisi’s government will be the main benchmark for his success as president.

Khandoozi has outlined as priorities: Strengthening the national currency, containing foreign exchange fluctuations, and eliminating speculative foreign exchange trading. He has also referred to limiting the growth of banks' balance sheets, managing the interbank interest rates, and other monetary and credit instruments. He has also pointed to measures such as containing the growth of government spending to one-third of expected inflation, smart detection of tax evasion, increasing revenue from the sale of government assets and observing budget discipline.

In Khandoozi’s words, the benchmark of success will be that none of the new policies should undermine real growth in the economy. The minister himself has stated, “Facilitating economic growth [can be achieved] by reducing the cost of production, mainstreaming government regulations, strengthening intellectual property rights and facilitating the financing of projects.” He also wants to heavily tax speculative and profiteering activities.

However, the reality on the ground will be more relevant than any plan. For example, the current financial position of the government is so vulnerable that President Raisi has instructed all government entities to sell off their excess assets.

Seen from the perspective of the business community, the roadmap also ignores one of the key parameters in the current economic situation, namely external sanctions. According to Mir Mohammad Sadeghi, top advisor to the Iran chamber of commerce, as long as sanctions and bottlenecks in international financial exchanges are not addressed, the Iranian economy will face serious problems in the smallest details.

In order to highlight the roadmap's challenges, consider some of the specific goals and their feasibility:

The most significant problem is the external sanctions. Securing sanctions relief in the Vienna talks would allow the Iranian government achieve a number of its economic goals. At a minimum, access to Iran’s frozen funds on international accounts will improve the country’s financial position.

Furthermore, even though the roadmap includes valuable objectives such as reducing corporate tax, increasing transparency and mainstreaming government regulations, past experience has shown that such goals won’t be achieved as long as the overall governance structure is not reformed. In the words of the economist Shaghaghi Shahr, “We have an abundance of economic plans, many lying on the shelves for many years, but why these programs have not been implemented is an important question that the government must answer.”

Iran does not have a shortage of laws and regulations to improve business conditions. However, the current governance structure is based on prioritizing the state organs including the government and semi-state organizations. This then produces a culture of administrative and financial corruption that impedes reform.

Therefore, as long as President Raisi does not get all the key centers of power to join in a comprehensive plan, any limited improvements that will then be undone by the current decision-makers.